This is my entry in the “It’s a Wonderful Life Blogathon” hosted by The Classic Movie Muse. Click HERE for more great posts celebrating the 75th anniversary of this classic. 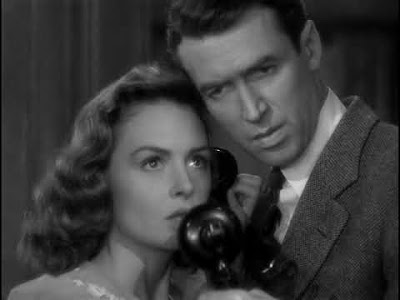 I hate to be a wet blanket at this party, but I have a bit of an issue both with George Bailey and James Stewart.

Oh George, you are such a good guy, really. I mean look at all the sacrifices you’ve made, all the good things you’ve done and all the hardships you’ve endured. But let’s face it, you can be one grumpy s.o.b. It’s a good thing Mary loves you. And Clarence and the rest of Bedford Falls. Okay, maybe there is a reason. I'm open to it. 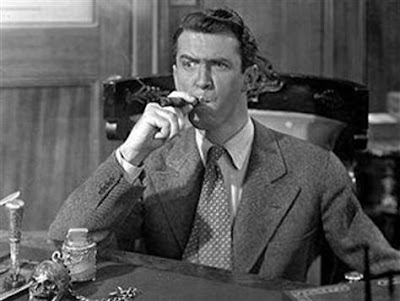 Now to James. It’s kind of in my movie loving DNA to love this actor. I mean, who doesn’t? But, it seems to me that he is always playing a rather disagreeable fellow. “Rear Window”? He’s complaining about Grace Kelly. GRACE KELLY! Come on. In “Vertigo” he is harassing Kim Novak and being totally obnoxious to Barbara Bel Geddes. Why Katharine Hepburn did a stint in his arms in “The Philadelphia Story” is a mystery to me (thank goodness she came to her senses and fell back into Cary Grant’s arms). And in “Bell, Book and Candle” it makes one wonder why Kim Novak’s witch didn’t cast a permanent spell to erase his disagreeable tendencies. Now that I come to think of it, his casting in “It’s a Wonderful Life" is a pretty perfect blend of character and actor.

But there was one thing Mr. Stewart did in his films that I heartily approve of  - he was a pretty darn good kisser, and therefore, so was George Bailey. Take a gander at George’s 2 greatest kisses and a bunch of others by Mr. Stewart. Since someone took the time to make this video, I guess I’m not the only one to think Mr. Stewart sizzled in the lip lock department.

That scene by the telephone is pretty darn sexy for a holiday movie, isn’t it? The longing, the desire, passion….aww – I guess I’ll just have to watch it again this year. I always suspected there was more to George Bailey than just the good old Building and Loan. 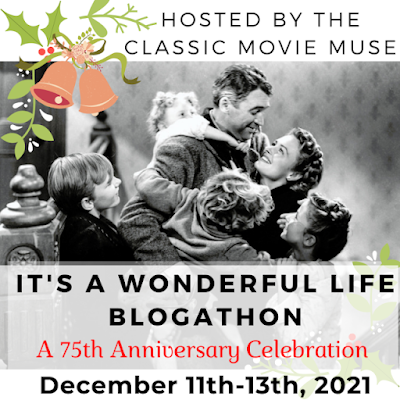 Posted by FlickChick at 8:58 AM

Email ThisBlogThis!Share to TwitterShare to FacebookShare to Pinterest
Labels: It's a Wonderful Life, James Stewart

That kiss in It's a Wonderful Life always makes me feel like I should cough or say "excuse me" or just sneak away.

PS: Jimmy can't help the grumpy; it's a Taurus thing. I get it.

I love how you said Stewart's casting for George Bailey is the perfect blend of character and actor. Stewart appears in so many of my favorite movies that I've been pondering lately if he just happens to appear in my faves or if he's one of my favorite actors.

I think I've just taken his presence for granted as one of those actors that were always "there," never had to discover him.

He and Donna Reed play that phone scene to perfection! George was a passionate guy with all those dreams he had, and as evidenced by the phone scene, he was quite romantic too.

Thanks so much for joining my blogathon with this post, Flickchick! Merry Christmas to you!

You never would know Mr Stewart was super worried! I wish we could see the censored cut version of the Kiss- just thinking about it is kind of naughty!

It IS a sizzler! I think that edge of desperation really bumps it up from a good kiss to a great one.

I can totally relate to your mixed feelings about James Stewart and George Bailey. I’ve had a sort of ambivalent love / indifference relationship with James the actor that was difficult even for me to understand until preparing my own post. And for several years, I enjoyed It’s a Wonderful Life to a point, but I definitely had some issues with it - and one of the scenes I found most difficult to watch was the famous kissing scene. (I really didn’t like it that he grabbed Mary and even shook her a little. And given how he behaved while he was there, if I was Mary, I just didn’t think I’d want to kiss him at all.) But over time, I began to see more to his actions, and I eventually had a change of heart. (I also cover the “telephone scene” in my post, because…you just can’t talk about It’s a Wonderful Life without it!)

I’m glad this blogathon led me to your blog. :) If you haven’t yet, I’d love for you to check out my post! (over at The Classic Film Connection)

There are so many things about Mary and George's scene that are so wonderful, even if I had to see It's a Wonderful Life several times to appreciate them after that kiss-at-the-phone part.

"The place still smells of pine needles." "I forgot my hat." Check.

There's more, of course, but then I may as well recite the entire scene!

Thanks to all for the kind comments. Even though I do occasionally tire of this film from so many viewings, it's one I think we all have to come back to at one time or another. I guess that's the definition of a true classic.

Great post! One of *the* best love scenes in film history.

Oh yes, that's quite a kiss – and James Stewart has quite the resume, according to the video you posted.