The Great Dictator: Beware of Buffoons

This is my entry in the Dual Roles Blogathon hosted by the great bloggers at Christina Wehner: Classic Movies, Musicals, Old Books and the Great American Songbook and Silver Screenings. Check both sites for more fabulous cinematic doubles. 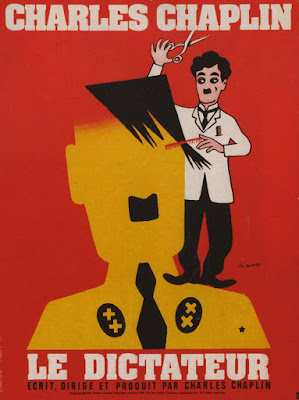 In one of history's greatest ironies, the world's most evil man shared a distinctive mustache with a cinematic symbol of compassion, humor and humanity. Most movie stars would have shied away from the comparison, but Chaplin pursued it and, in "The Great Dictator," created one of the most courageous cinematic statements against fascism and its accompanying terror.


While the Jewish Barber is not the Little Tramp, they share some similarities. Aside from a physical likeness, they are kindly citizens and tender of heart. 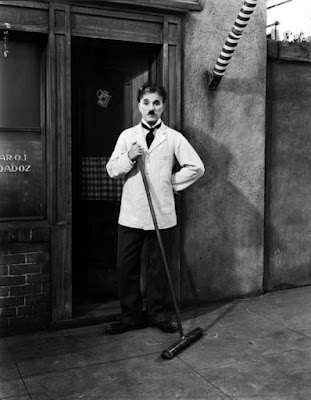 A WWI hero, the barber returns home to Tomainia with amnesia. His country is changing. He is philosophical, this gentle soul and tries to make the best of the bad situation. The country he fought for would never harm him, would it? 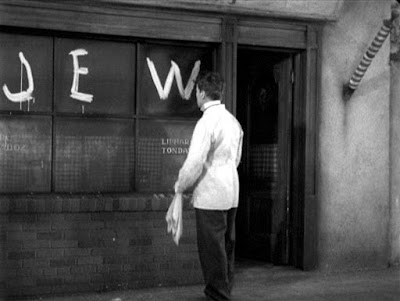 The barber even manages to find love in the ghetto. His scenes with Paulette Goddard are quite charming. The Tramp was no stranger to romance, and the barber is his soul mate in this respect. 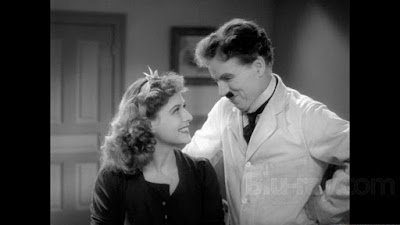 Chaplin adds a barber-ballet with old Keystone buddy, Chester Conklin, and it's a nostalgic delight -no words necessary.

A mirror image in life and a negative image of the soul, Adenoid Hynkle, dictator of Tomainia, is at work on his plan to take over the world. 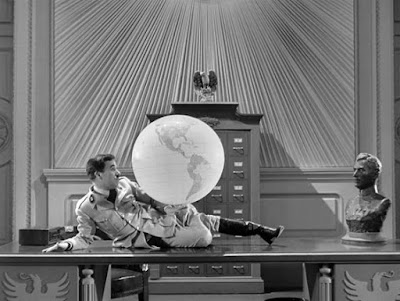 Adenoid Hynkle is a bigot, a bully, a braggart and a danger to civilization. When audiences see Hynkle, they know it is Hitler.

Bullies need friends, and just as Hitler  needed Mussolini, Hynkle joins forces with the dictator of Bacteria, Benzino Napaloni. Napaloni, the buffoon, is played to perfection by Jack Oakie, and his scenes with Chaplin are some of the film's funniest. 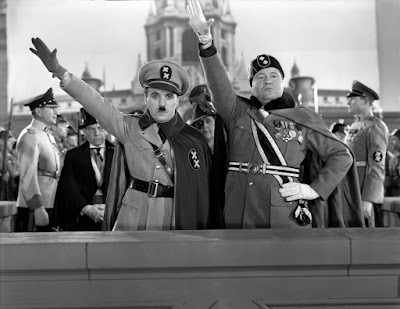 And yes, the doubles are switched. Not to give to much away, but Hynkle, out of uniform and shooting ducks, is mistaken for the barber and shot. The barber is enlisted to take his place. Good replaces evil and hope is restored.

The Great Dictator, made at a time when the United States was not officially at war with Germany and before the public was fully aware of the horrors of the concentration camps, was an exercise in great courage. Hitler and Mussolini might well have been viewed as buffoons, worthy of ridicule and a chuckle. Chaplin truly put his beliefs on full display. The comedy is unforgettable, but the message is important and timeless, even more so in these perilous times:

The Great Dictator was Chaplin's first full sound film and he chose to use his voice in the most powerful way possible -  with humor and deep conviction. He remained true to himself and spoke the truth and provided the world with a great film and a tale still too relevant in these times.
Posted by FlickChick at 7:48 PM 11 comments:

Sunset Boulevard: But What about the Monkey?

I can’t help it. I want to know more about Norma Desmond’s monkey.

Oh sure, we know he’s dead, and that he serves as the plot device to get Joe Gillis into Norma’s cage, but, really, who was he? Was he, as Joe guesses, a distant relative of Cheetah? What was his name? Was he a movie star? Was he rescued from a circus? How did he and Norma meet? Was he even a “he”? After all, she did want to line the coffin in pink.

Yeah, yeah, he’s the crystal ball into which Joe can see his future – becoming Norma’s new monkey (remember that dream he has about the organ grinder and the monkey?). But, I’d really like to know more about him. Did he like bananas for breakfast? Was he a clever and urbane conversationalist? Was he able to mix Norma’s favorite cocktail? Did he and Max get along? Did he have a smoking jacket?
Like Rosencrantz and Guildenstern, the monkey moves the plot along. But unlike those serviceable characters that are expendable, the monkey is missed.
Imagine if he had lived! He could have advised Joe NOT to get the vicuna. And, he might have helped Joe keep his clandestine meetings with a little more discrete. Even better, he might have helped Joe escape (after helping him punch up Norma’s Salome).

Billy Wilder reportedly kept telling Gloria Swanson that Norma was doing the monkey, but I’m not buying it. I picture the monkey as more of an Oscar Wilde type – witty, charming and possibly gay. Written in the margins of Sunset Boulevard’s main story is the story of an unnamed monkey who died in luxury but whose life remains a mystery.