Clearing Out My DVR: Why Can't I Like Jean Arthur?

As part of my continuing resolve to clear out all of the movie's I've recorded but resisted, I took a deep breath and jumped into 1943's "The More the Merrier" starring Jean Arthur, Joel McCrea and Charles Coburn. 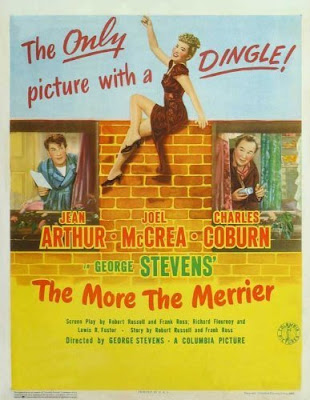 It's a classic, right?....one of those films that is endlessly praised for it's comic charm. So why have I resisted it? In a word (actually 2), Jean Arthur.

I don't why I can't warm up to this actress. I hear her voice, I see her face and I am never drawn in. Now, I realize that I am in the very tiny minority of folks who don't love Ms. Arthur, but what can I say? We all have a list of certain performers who are beloved by most but who might not thrill us so much.  In "The More The Merrier" Jean Arthur is perfectly charming, perfectly comical and kind of adorable. But I can't shake the feeling that she seems like an actress who should not be a movie star, more like the girlfriend of someone powerful who thinks his talented gal should be a star. Don't get me wrong - she is good, really good. But I just get the vibe that she would much rather be somewhere else. Maybe that's it - I don't feel that she is 100% committed.

As for the film, it is quite wonderful. Joel McCrea, as Arthur's accidental border who upends her perfectly ordered life is his easy, casually All-American sexy self. Charles Coburn, as the bureaucrat in Washington D.C. to study the WWII housing shortage is the delightful engine that propels the unlikely romance between the reluctant landlady and her border.  While the film is a fine WWII comical romance, it also is the portrait of 3 nice people who all become friends (and more).
And I will admit that during the travel case scene, Jean was pretty swell.
Of the films I've seen with Jean Arthur, this is probably the one in which I find her least objectionable. Actually, she was pretty cute if you ignore the annoying crying scenes. Nevertheless, the film won me over, so maybe there is hope for me and Jean. And who wouldn't want an accidental border like Joel McCrea?