Keep reading to learn how to win a copy of "Mary Astor's Purple Diary: The Great American Sex Scandal of 1936" by Edward Sorel. 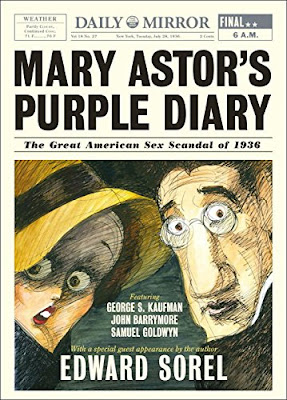 When a celebrity sex scandal of the 1930s runs into a 1960’s left leaning liberal political cartoonist, the result is a comical and affectionate re-telling of the scandal along with some down to earth biographical details and some even more charming and delicious illustrations. DO NOT read this book on your e-reader.

Edward Sorel, our author, and Mary Astor, the subject of this story, met, according to the author “cute.” You know, kind of like they did in the movies. Only Mr. Sorel met Mary while he was ripping up some linoleum in his New York City kitchen in 1965. Underneath the tired floor of his rent-controlled apartment was a treasure trove of newspaper articles about the great Hollywood sex scandal of 1936 – the tale of Mary Astor’s purple diary. Well, you know how these things go. Once a movie buff gets fixated on something and someone we have to research it down to the studs. And that’s what Edward Sorel did. Along the way he developed a huge crush on the lady, strange as it seemed to him. He - an avowed atheist and she a devout Catholic who spent too much time with the bottle  - did not seem to be a match made in heaven (or wherever). But, as the author explains: "Isn't every couple an odd couple? Why would Chopin, who had TB, fall in love with a woman who smoked cigars? Why would Donald Trump, who prides himself on good taste, fall in love with Donald Trump? Obsessions by their very nature defy reason." See how much fun this book is?


Poor Mary Astor – she had such a miserable upbringing (see here for the story of her horrid parents). Her father – who Sorel calls “a Teutonic fathead” - pushed his beautiful daughter into the movies and basically made her support the loathsome duo that were her parents until she escaped into marriage #1 (but not before having a flaming affair with the much older John Barrymore). Sadly, that marriage (to director Kenneth Hawks, brother of Howard) ended tragically when Hawks died in a plane accident while filming the aerial scenes of “Such Men are Dangerous” (1930). She then tied the knot with Dr. Franklyn Thorpe the following year and subsequently gave birth to a daughter, Marylyn. Thorpe, it turns out, was a pill and a bore and Mary, it turns out, had a more than healthy sexual appetite. What’s a girl to do but seek fulfillment elsewhere? One of the elsewheres she sought out was the bed of the great Broadway playwright, George S. Kaufman. Mary and George apparently enjoyed one another quite a bit, but George was married and ultimately committed to his wife and Mary, who also had literary talents, kept a diary.

Mary and Thorpe decided to divorce, but when the couple quarreled over custody of Marylyn, Thorpe pulled out the secret weapon of Mary’s tell-all diary. Many faked entries were leaked to the press, but the real entries had all of Hollywood shaking in their boots? Apparently, Mary was a busy gal who named names and also commented on the sexual prowess of her partners. Thorpe held this over Mary’s head in order to force her to back down from the custody fight. Mary, bless her heart, fought back and won her battle, though not without a great personal cost.
Not only does Sorel tell a zippy story, but he also sprinkles Mary’s story with some choice and amusing biographical anecdotes of his own. He’s a very interesting fellow!

And, of course, there are the wonderful illustrations. These alone are worth the price of the book.

I love a good book about a Hollywood scandal that treats its stars with compassion, humor and respect. For anyone that loves an great tale well told and illustrated, this book will not disappoint.

And now for the giveaway

1. Email me at flickchick1953@aol.com
2. Write "Giveaway" in the subject line of the email
3. Remember to give me your name in the body of the email.

The winner will be notified on February 1st.

You love classic film? You love a charming musical score? You love charismatic stars? You love enchantment? Go see it. "La La Land" is an all out/all in movie musical, which presented me with a surprising dilemma.

Director Damien Chazelle has created a musical with no ifs, ands or buts. It is an homage to great musicals (and a few non-musicals) of the past (how many can you spot?) and he clearly has a "thing" for Ingrid Bergman. "La La Land" tells the timeless Hollywood story of aspiring actress Mia Dolan (Emma Stone) and struggling jazz musician Sebastian Wilder (Ryan Gosling).

It establishes its intent with a knock-out opening musical sequence in a Los Angeles traffic jam and never changes gears. It never looks down its nose at the genre, it never tries to mask its roots with a hip, modern attitude. Mia and Sebastian struggle and follow their dreams and we root wholeheartedly for them. So why, why did I hang back for a portion of the film?
Why are people breaking into song or a dance in the middle of a story more acceptable (to me) when filmed over a half a century ago?

Ryan Gosling is a revelation. His ease with the dance and the music was enchanting and he displays a real star quality that induces more than a sigh or two.

Emma Stone, while not quite as comfortable with the dance, is a winsome heroine. I finally had to admit that, to paraphrase Shakespeare, the fault lies not in the stars, but in me.

"La La Land" had to break through my own modern defenses. Why would I not immediately buy into the story of Mia and Sebastian while willingly accept Don Lockwood and Kathy Selden's romance? It wasn't them, it was me. Would I accept "Casablanca" so completely if the very same film was made today? But, "La La Land" did not let me off easy, and eventually I surrendered to the enchantment. The scene at the Griffith Observatory where the lovers dance among the stars sealed the deal. From then on, I was all in and if felt so good to be transported on the musical magic carpet ride.

No spoilers here, but I'll just say that this love letter to Hollywood, to musicals, to star power and to romance is, for me, a winner. I think I will have to see it again because it's great to be enchanted at the movies and not in front of the TV.

I'm now adding Mia and Sebastian to the endless parade of movie-mad characters whose journeys to the promised land of Hollywood sometimes end in triumph and, often, heartbreak.