This is my contribution to the CMBA Fabulous 50s blogathon and also serves as an entry into my 2014 series, Hooray for Hollywood.

Billy Wilder, that old softy, he's like a cynical hard-as- nails brass ring on the outside and all sentimental and gooey on the inside. Sunset Boulevard: hard, unforgiving, ghoulish black comedy, right? I used to think so, but now I see it differently. I used to see Norma Desmond as a grotesque old relic who lost touch with reality. Now, older than Norma was at the time of the story (50), she seems perfectly normal (well, except for that monkey....).

1. Norma is 50 years old. Dead to Hollywood, but hardly finished. She still has passion and when hunky Joe Gillis happens by, well, can you blame the girl? Cougar spotted on Sunset Boulevard!
2. Norma says:
"we didn't need dialogue. We had faces."
You bet they did, Norma. They had Garbo, Fairbanks, Valentino, Pickford, Pola Negri, Norma Talmadge and Gloria Swanson.
"I am big. It's the pictures that got small."
And so they did. The gritty films of the depression married with sound and the true magic of film was lost. 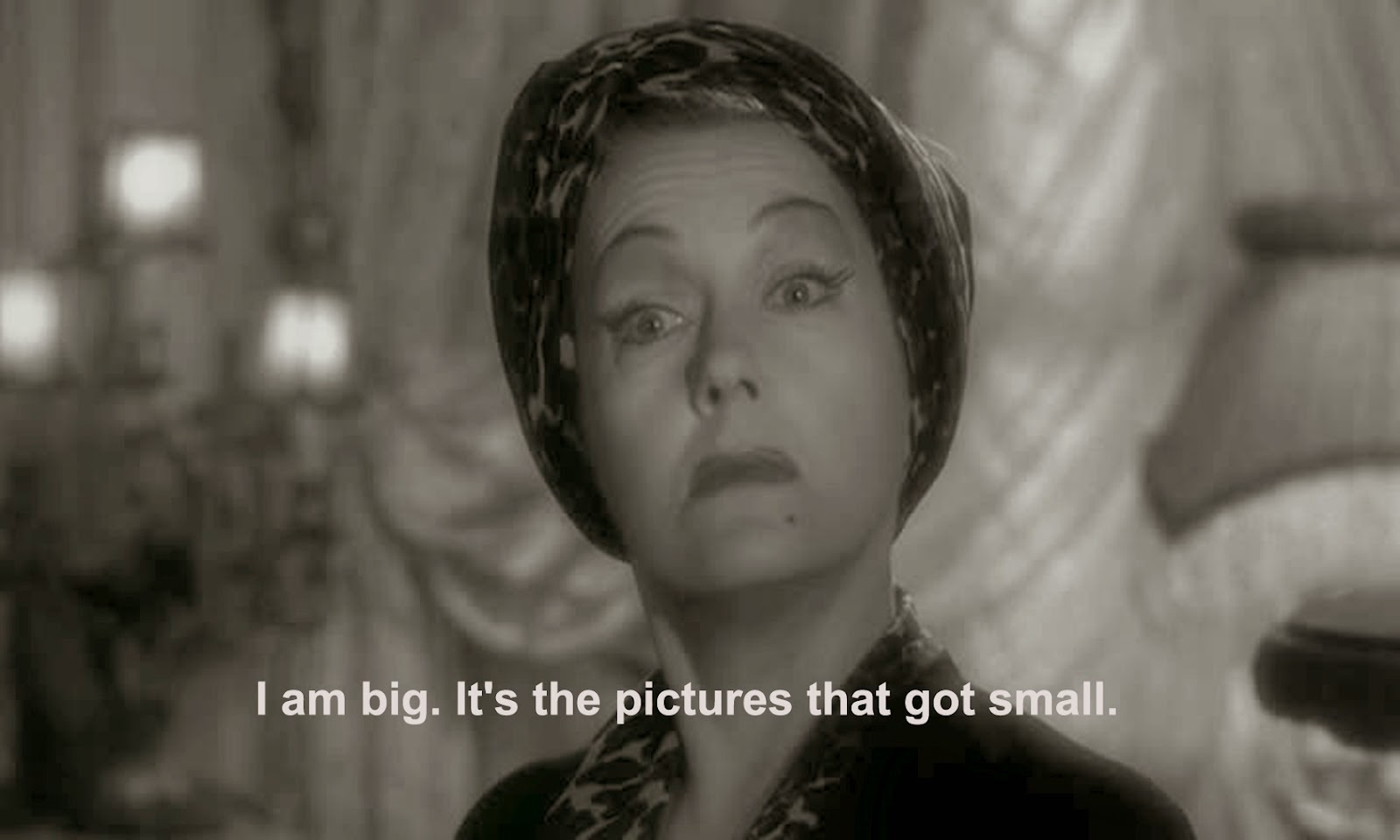 "They took the idols of the world and smashed them, the Fairbankses, the Gilberts, the Valentinos! And who've we got now? Some nobodies!"
Yes, once they opened their mouth,  out came words, words - and suddenly, stars were just like real folks.

The woman was a prophet! But like so many prophets, she is deemed to be a nut case.

Wilder's affection and sadness over the passing of an era is evident (Kevin Browlow's great book about the silent era, "The Parade's Gone By," drew it's title from Joe's observation that Norma was "still waving proudly at a parade that had long since passed her by"). The beauty of Swanson in a clip from Queen Kelly stops the heart. Seeing the face of Buster Keaton melts the heart. They are both beautiful and they evoke not ridicule from the viewer, but awakening of a forgotten longing. 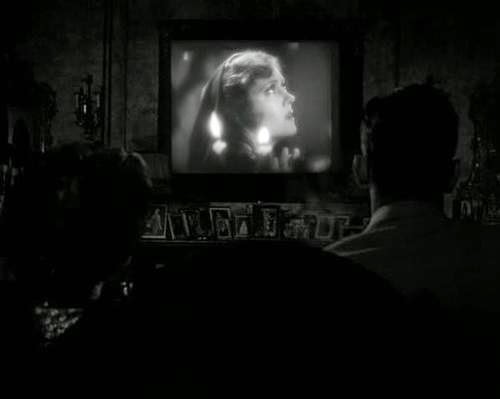 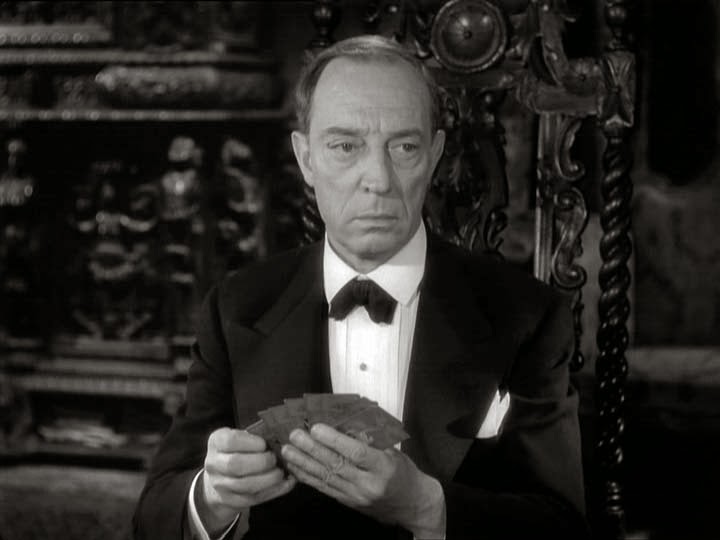 By 1950, the silent screen seemed as old as the Rosetta Stone. The silent stars were ancient relics, either dead,  playing small parts or living in obscurity - or even worse, appearing on television.  The glamour, the mystery, the size of Hollywood stardom had all shrunk to merely lifesize. Wilder, who grew up on the Hollywood glamour of the silent films, never forgot the sheer magical fantasy of the era, even though film had moved so far from it by 1950. We never forget that which first enchants us, do we?

And so, what once seemed to me to be a story about a crazy old bat living in a crumbling mansion is now anything but that. The greatness of this film lies in the push of the realism and the pull of the past. The casting of Swanson, Erich Von Stroheim and those Waxworks (Keaton, Anna Q. Nilsson, and H.B. Warner) was true inspiration and a bouquet of roses to the past just to show the audience what they might not realize they still missed.

All right, maybe Norma was nutty, but there is real cause for her pain. She lived the dream, but it was only a dream (and a big nightmare for poor Joe Gillis).And as one of the wonderful people in the dark, I appreciate the effort, Madam and Max.

In 1950, Valentino would have been 55, Clara Bow was 45 , Mary Pickford was 58 and Greta Garbo was 45. Too old to be seen. Too old be idolized, thus, too old to be useful. Hollywood is a cruel town.Wilder makes that clear in this greatest of films. And if you think its funny, you're not yet 50.

THE THIEF OF BAGDAD (1924): NEVER WERE MOVIES MORE MAGICAL

Last night I had a dream fulfilled: I saw Douglas Fairbanks' THE THIEF OF BAGDAD on the big screen. 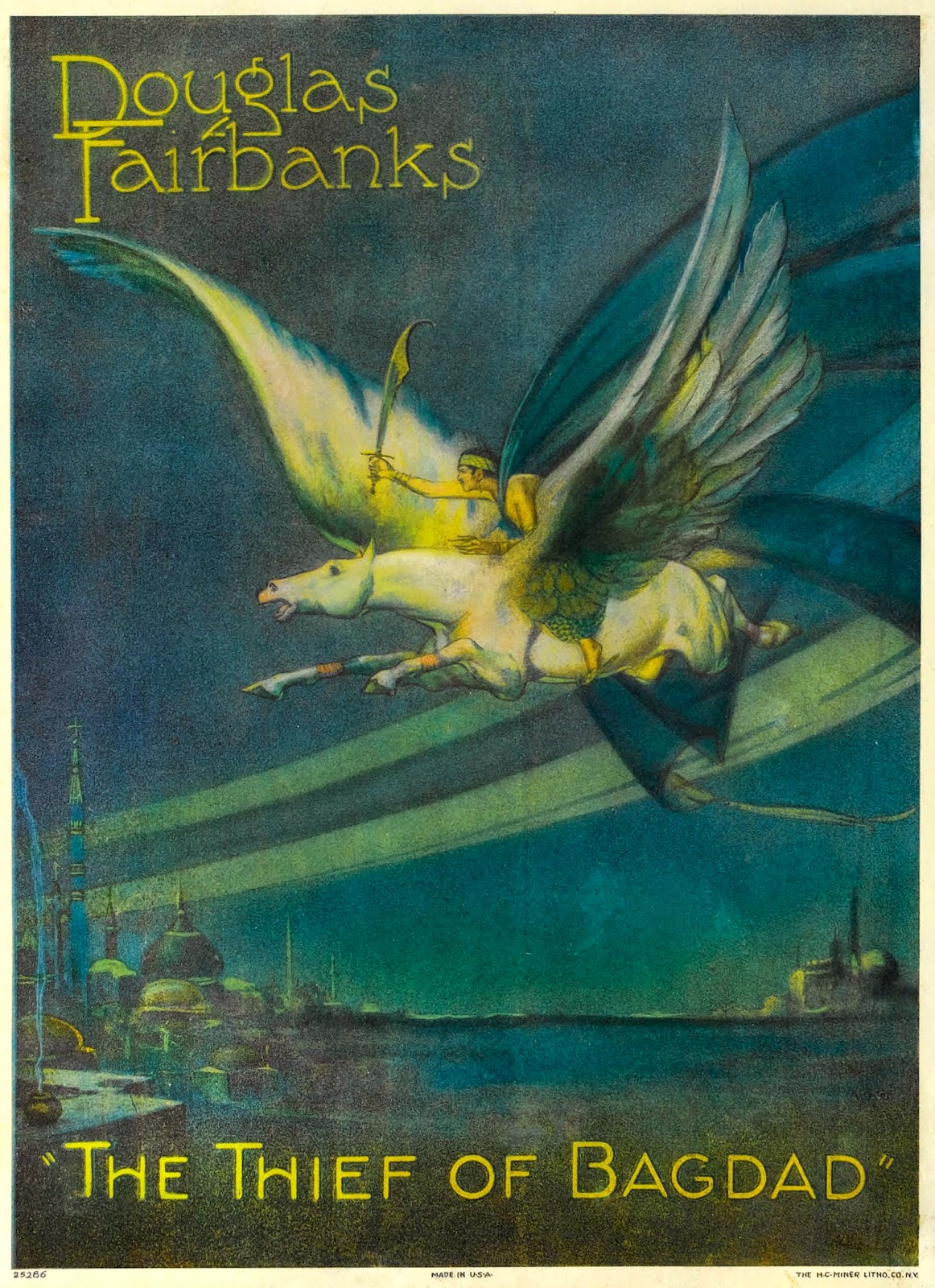 I'm a modern movie goer who is a fan of film of all eras. I love the earliest to the latest, as long as it suits my fancy. And, boy, did this film suit! It embodied all that I absolutely hold dear about movies: innocence, magic, and adventure of the heart and spirit.

Fairbanks, with all of his charm and adolescent swagger, is the human star, but the magnificent sets of William Cameron Menzies overwhelm all humans (and flying carpets, winged horses, and dragons and the like) on the screen.

Director Raoul Walsh, not normally a man drawn to fantasy, seems to share Doug's spirit of fun and we go off on a glorious adventure.

The film opens with a wise man pointing out a lesson written in the stars: 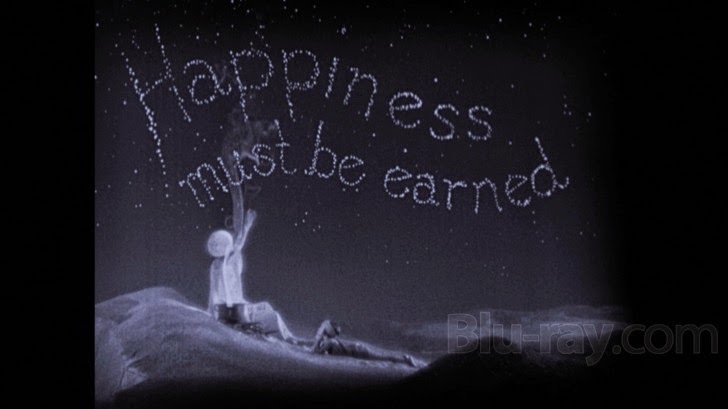 Meanwhile, back in Bagdad (spellcheck wants me to use Baghdad, but I'm going with the way it is spelled in the title), Our Doug is a cheerfully amoral thief who manages to pickpocket jewels and even a magic rope. His motto is "if I see something I want, I take it." He and his partner in thievery (the wonderfully named Snitz Edwards) decide that what they really want is a chest full of jewels from the palace. However, once in the palace, Doug sees something he really wants: The Princess Beloved.
But no magic rope can lasso this dame. He must win her love through hard work, courage and determination by bringing her the rarest of treasures and outdoing her 3 other princely suitors (including the evil Mongol prince who not only wants the Princess, but the entire city). Doug battles fire, dragons, giant bugs and sea monsters to gain the cloak of invisibility and a tiny box filled with magic powder. Doug trumps the treasures found by the other suitors (a magic carpet, a magic apple that can bring the dead back to life and a crystal ball), rushes back to the Princess on a flying horse and saves the city from the evil Mongol prince by using his magic powder to create a fearsome army.
Doug uses his cloak of invisibility in many clever ways, especially to spirit his darling away from prying eyes. At last, happiness has been earned and the princely hero and his beloved ride on their magic carpet and share a romantic kiss.
A real highlight of the film is the slinky, exotic and sensual presence of 19 year old Anna May Wong. 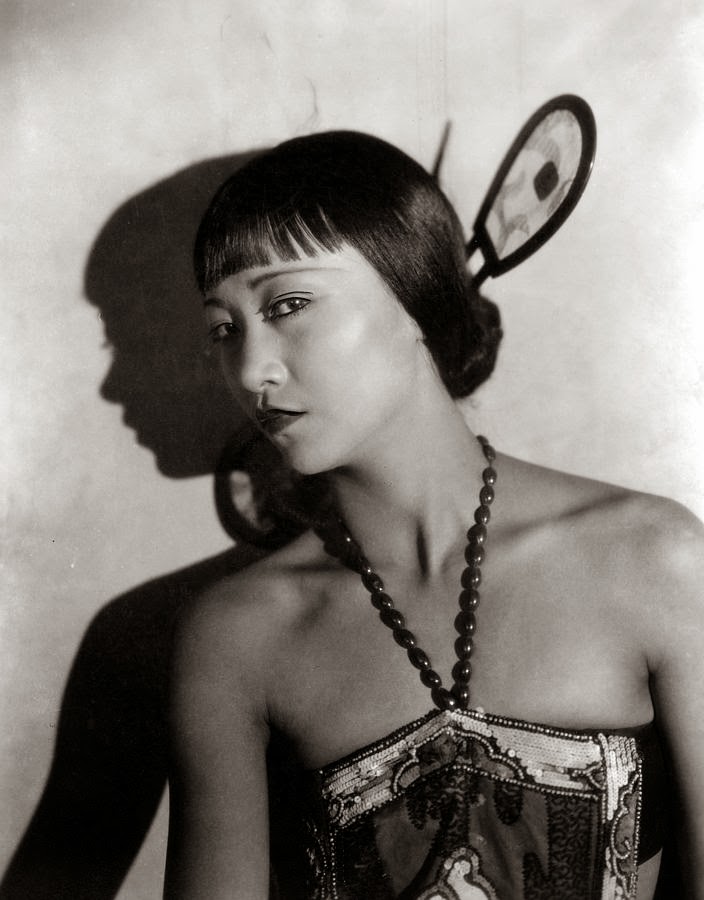 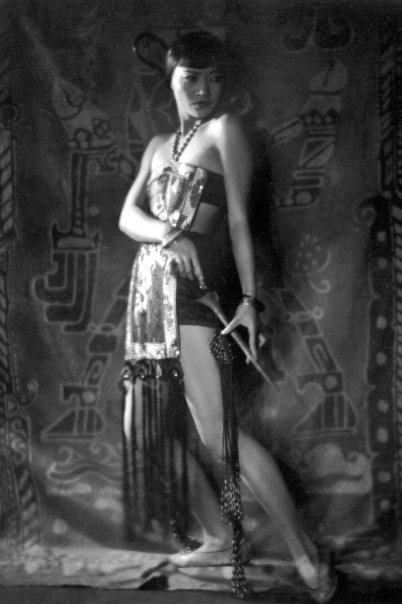 Who doesn't love Dame Angela Lansbury? Her devotion to her craft is awe inspiring, as is her talent, longevity and just general niceness. As Mom's Day approaches it's time for a little fun with a few of her best roles. 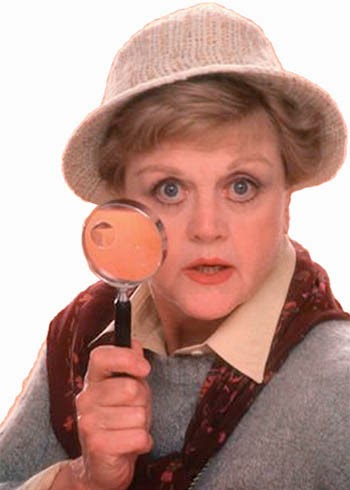 Everyone loves Jessica Fletcher, right? But, let's peer beneath the sunshine of Mrs. Fletcher and examine the dark yin to her bright yang and start with a question: What do we really know of Mrs. Fletcher's life before Cabot Cove?

I offer these facts up for consideration:

Check out this cold mama in THE WORLD OF HENRY ORIENT.

Self-absorbed and shallow, she neglects her child and ends up having an affair with her teen-age daughter's crush. Bad mama! After divorcing her first husband, it appears she moved on to Washington, D.C.

Look familiar? As Mrs. Iselin, the Communist operator in THE MANCHURIAN CANDIDATE, this woman colluded with the enemy, tried to have her brainwashed son assassinate the President and, instead, was allegedly murdered by her son. I am not so sure she was murdered, as she was a crafty wench.
My theory

Mrs. Iselin, that murderous fiend, managed to survive and decided that she needed to "lay low." What better place to lay low than the sleepy little seaside town of Cabot Cove, Maine? There, she recreated her life as an upstanding citizen. 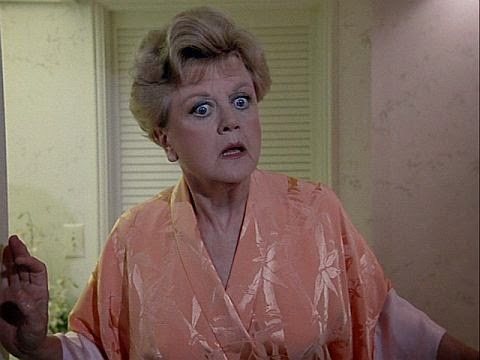 But did she? Let's examine the facts: her husband, Frank, died (big surprise). She had a way with a story (like the liar she is and was) and - most damning of all - everywhere this woman went murder followed. Thankfully, Mrs. Fletcher had no children (as far as we know!), as her prowess as a serial killer makes Dexter look like a dabbler. 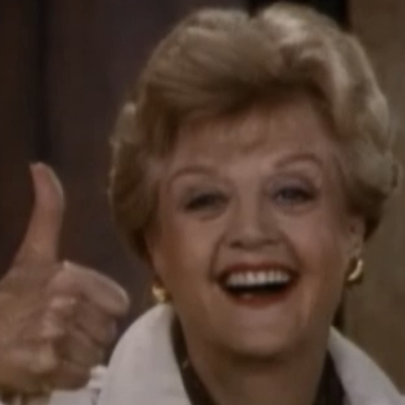 But, cheers to Jessica Fletcher for getting away with it all and cheers to all the great mamas out there on their special day.