In honor of National Classic Movie Day (May 16th), The Classic Film and TV Cafe is hosting the Five Stars Blogathon.

Okay, it's really hard to confine this to 5, but here goes (in no particular order):

5 reasons why:
He was the first movie star I fell in love with.
He has more charisma than any other star. Ever.
A tough guy who dances? Talk about having it all.
That bad-boy smile
New York to the core

5 favorite Cagney films:
Love Me or Leave Me
Angels With Dirty Faces
City For Conquest
The Strawberry Blonde
Taxi!

5 reasons why:
That face
That voice
The way he looks in a tux
More charm than any person on earth. Period.
With all of the above he never is afraid to be silly

5 favorite Grant films:
Notorious
People Will Talk
North By Northwest
Charade
The Bachelor and the Bobby-Soxer

5 reasons why:
Her voice
Her eyes
The way she always seemed to be on last raw nerve
She makes me want to know more about her when I am watching her
She always seemed so sophisticated(even in her pre-code lingerie)

5 favorite Dvorak films:
Three on a Match
The Strange Love of Molly Louvain
Heat Lightning
Scarface
A Life of her Own

5 reasons why:
He is the greatest movie star
The humanity of the Little Tramp
He makes me laugh
He makes me cry
He is eternal

5 reasons why:
I am always surprised by how much I like him! In fact, I’m surprised to see him on this list.
He is extraordinarily ordinary in the very best way
He makes me want to be always on his side
As soon as I see him on screen, I feel better
He’s always good, no matter the film, no matter the part

Apologies to Ann Sheridan, Edna Purviance, Tony Randall and Buster Keaton who would have been there if they could.

For more star-studded celebrations of Classic Movie Day, visit the Classic Film and TV Cafe and see if any of your favorites made the cut. 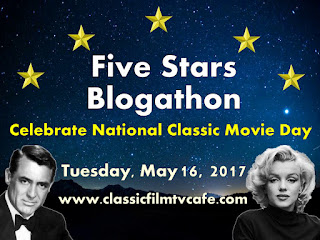 William Wyler directs Laurence Olivier, in possibly his greatest film performance, in a tale of obsessive passion. No, it’s not “Wuthering Heights.” I’m talking about 1952’s “Carrie,” based on Theodore Dreiser’s novel, “Sister Carrie.” What – you haven’t seen it? Don’t feel badly, most people haven’t. 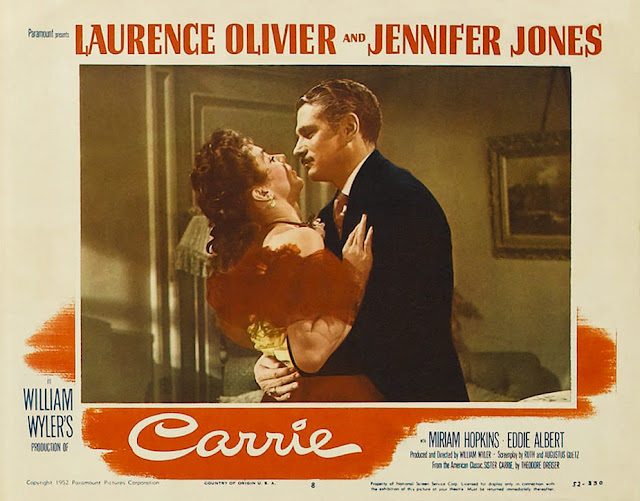 Olivier’s 1939 Heathcliff was a powerful depiction of obsession fueled by passion. His George Hurstwood in “Carrie,” also has a passionate obsession, but this time it is shaded by the melancholy of autumnal love. Hurstwood’s single-minded pursuit of Carrie at all costs (big costs) leads him to ruin and us to heartbreak.

Innocent Carrie Meeber (Jennifer Jones) leaves her poverty and small town behind for a chance at a better, more exciting life in the big city of Chicago. While on the train to the city, Carrie meets fast-talking traveling salesman, Charles Drouet (Eddie Albert). He sweet talks her in an effort to pick her up, but Carrie resists. Still, Drouet knows an easy mark when he sees one. He hands her his card and tells her to look him up when she gets settled. In Chicago Carrie bunks with her hard-working and poor sister and brother-in-law. They live in the slums and, clearly, this is not the glamorous big city life Carrie envisioned for herself (Jennifer Jones looks as though she is smelling something slightly disgusting). Because Carrie is expected to pay her own way, her sister gets her a job at a garment factory. It is soon apparent that Carrie is not made for such work. She injures herself on day one, is fired, and never looks back.

Desperate not to let her family know she is unemployed, Carrie looks up Charlie, who is only too happy to see her. In only a Chicago minute, Carrie is living the life of middle class luxury as the kept woman of the traveling salesman. Charlie may not want to marry her, but he is good to her. On their first evening together they dine at Fitzgerald’s, an upscale restaurant managed by the elegant George Hurstwood (Olivier). Hurstwood is immediately taken by the fresh young Carrie. Charlie is too busy to notice.

As Carrie pressures for marriage, Charlie continues to string her along. One night he invites his friend Hurstwood to dinner. Carrie is immediately attracted to her older, more polished, and richer guest who does not judge her morally questionable living conditions. She and Hurstwood chat about their mutual love of the theater and, before you know it, the unsuspecting Charlie suggests Hurstwood escort Carrie to a show while he is out of town. What a dummy.

Before long, Carrie and Hurstwood are spending time together and falling in love. For Carrie, Hurstwood is a step up; for him she is a last chance. Finally Charlie catches on and tells her that she is a fool because Hurstwood is married. It seems Hurstwood did neglect to tell Carrie that important tidbit of information. She breaks it off, but is led back into contact with the sly old dog when he tells her that Charlie has been injured and he must take her to him. Naturally, it’s a lie, but Carrie has it bad for him and Hurstwood promises to leave his wife.

He does try to keep his promise to Carrie, but his shrew of a wife (Miriam Hopkins) will not agree to a divorce. Evidently, she is the one with the money and she chafes at being married to a mere restaurant manager. She hangs on, it seems, for appearance and spite. Hurstwood is determined not to lose his last chance at happiness, storms out of his grand house and back to Fitzgerald’s to lock up. In what is portrayed as an accident (but there are no accidents, right?) the timed safe where the daily proceeds are to be deposited locks before Hurstwood can store the restaurants $10,000. In that moment, he decides his fate, leaves an I.O.U. for the boss, and heads over to Carrie’s. He tells her he has left his wife and together they set out of New York to begin a new life.


Hurstwood leaves his comfortable life, as well as his wife and children, and sets of with the stolen $10,000 to begin a new life with Carrie. Although still married, he marries Carrie and the two have a happy start.

But, we know crime doesn't pay, and within days there is a knock on Hurstwood's door from a detective looking for the stolen money. Hurstwood gives him the balance and soon finds out that word of his bad deed has spread to New York, making it impossible for him to find work in his chosen field.

Before too long, Carrie and Hurstwood are living in poverty. Carrie tries to stand by her man, but Hurstwood is finally broken when an agent of his wife appears and demands that he sign over his rights to all property in exchange for a divorce. Carrie, pregnant, is shattered. Once she loses the baby, her passion for Hurstwood goes from cool to cold. His lies offer a good reason to bail on him, but her superior survival skills instinctively lead her and Hurstwood down different paths.


While Hurstwood leaves town and tries to see if he can make peace with his children when he reads about his son's upcoming wedding (he can't bring himself to try), Carrie makes her exit. From then on, the trajectory of their story speeds to its inevitable conclusion. Carrie, not surprisingly, finds her true place on the stage where success and fortune beckon. Hurstwood, devastated by her desertion, ends up living on the street.

After an evening's theatrical performance, old friend Drouet comes by to visit Carrie. He tells her that Hurstwood had stolen the money before he left and that he was forced to pay it back. Carrie now sees to what lengths her man went to be with her and she does feel some pangs of guilt. Maybe she can use that feeling in her next performance.

Meanwhile, out on the street, Hurstwood is begging. Carrie finds him and tries to give him money, as if that could make thing better. He agrees to take only .25, the cost of a bed at the flophouse. We see him turn on the gas and assume that he will at least find some peace. SOB!!!!!

So, that’s the story, but the real treat is the performances. I’m not a big fan of Jennifer Jones here, but her passiveness does neatly disguise an amoral personality who can easily justify her needs, no matter what the effect on those she leaves behind. She disappoints her parents (who do not want her to leave home), her sister (who grieves over her life of sin), Drouet (who got out-sharped, but still was a straight shooter with her) and, of course, Hurstwood, who she could not bear to live with once his life fell apart.

Eddie Albert as Charlie Drouet is pretty delightful. Always cheerful and full of good advice, he deserves a gal who appreciates a good time and a good heart.
Miriam Hopkins, as the miserable Mrs. Hurstwood, does not have much screen time, but Wyler makes sure we despise her. Must have been payback for all those Hopkins/Davis spats he got caught up in.

And, of course, there is Olivier. His passion for Carrie is painful because he is the one who loves more. He knows this is the last chance at romance and he grabs it (and the money). Sadly, his relentless pursuit of Carrie leads to his ruin. She cannot help him, and he cannot not help himself. His shabby descent and his loss of self-respect is painful to watch. Yet, there is the aura of romance about him as he shuffles off to his flop house to die. All for love.

In Dreiser’s story, money is the brass ring and poverty is a slow death. In the survival of the fittest, Carrie, whose  understanding of the law of the jungle is in her DNA, is the winner and Hurstwood the loser. In “Carrie,” Olivier gives us an unforgettable lover, no longer young, but as foolish as any young man who, mistakenly, believes that love conquers all. It is a shattering performance that should be seen. While wife Vivien Leigh was in Hollywood filming "A Streetcar Named Desire," Olivier was in town, too, giving an equally moving and heart-breaking performance.

This is my entry in the Underseen and Unrerrated Classic Movie Blog Association Blogathon. Click here for more soon to be more memorable films.
Posted by FlickChick at 12:08 PM 14 comments: