I love the stories about the great movie pioneers, you know -L.B. Mayer, Adolph Zukor, the Warner Brothers. But, before the usual and more famous pioneers, there were the earliest pioneers, the dreamers who served as the scouts who cleared the path and laid the foundation for a road that lead to a great industry. D.W. Griffith remains a famous name, but many of those who came before the moguls have fallen into obscurity. While I had certainly heard of the Vitagraph Studio, the names of its founders - Albert E. Smith and J. Stuart Blackton - were unknown to me. Author Andrew A. Erish, in his book "Vitagraph: America's First Great Motion Picture Studio," gives them their due and tells the story of a great studio that, for a time, flourished in those exciting, early days.

Two English fellows who had a hankering for show business, Smith and Blackton founded Vitagraph Studios in 1896 and set up shop in Brooklyn, NY. Starting with the days of the crude nickelodeon and progressing to shorts and feature films, the Vitagraph boys, like so many early pioneers, found themselves knee-deep in the endless patent wars with Edison, a financial struggle that would have defeated less determined men. They did prevail, but there always seemed to be bigger companies nipping at their heels.

In their heyday, Vitagraph launched the careers of Maurice Costello (as well as his daughters Dolores and Helene as child actors), Corinne Griffith, Florence Lawrence, Florence Turner, Anita Stewart, Antonio Moreno and Norma Talmadge. Tribute is paid to forgotten superstars of the era, comedians John Bunny and Larry Semon. Even Moe Howard (the smart Stooge) makes an appearance as a teenaged extra. Life at Vitagraph seemed like a cozy, happy family.

But, all good things must come to an end. The founders drifted in different directions and the company suffered. Eventually, the industry that they helped build got the best of them and, in 1925 Vitagraph was sold to Warner Brothers.

The book is a mixture of good gossip and heavy, important research. Zukor, founder of Famous Players and later, Paramount, comes across as a ruthless and power hungry philistine, the author never letting us forget he was a furrier. Norma Talmadge, one of the silent screen's greatest stars, is described as a bit dim-witted. Smith and Blackton, while flawed, are clearly held in high esteem by the writer, with Smith's Christian ethics praised to the end. The book can get technical at times, but it offers a thorough and detailed history of an important studio and a good glimpse at those more innocent times.

Vitagraph is long gone, but, in Brooklyn, a reminder of this once great studio remains. The smokestack that displays the company name somehow has managed to survive. There are luxury apartments now on the old studio lot. The name of the apartment building is "The Vitagraph," and, after a campaign to save the old smokestack, the developer of the complex as left it intact. I'm sure those 2 English chaps with show biz in their blood would be happy to see that last remnant of their life's work still standing. 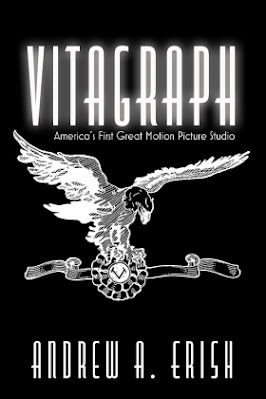 "Vitagraph" America's First Great Motion Picture Studio" by Andrew A. Erish was provided to me at no cost for review.