Have you ever fallen under the spell of a film? Of course you have, otherwise you wouldn't be here. Certain films and characters have a way of mesmerizing us and drawing us into their world. Count me 100% under the spell of one Margo Sperling, the lady with the missing cat in 1977's "The Late Show."

The 1970s saw a surge in new versions of noir. From some great late entries into the genre ("China Town", "The Long Goodbye") to parodies ("The Black Bird", "The Cheap Detective"), the gritty gumshoes and grimy neighborhoods (usually of Los Angeles) had a brief moment of vogue. "The Late Show" is not a parody. With a tight, taut and quirky script by Robert Benton (who also directed) combined with a Robert Altman "feel" (he produced), it takes us on a journey of new age crashing into nostalgia that somehow feels so right.


"The Late Show"gives us an authentic and compelling performance by Art Carney as Ira Wells, the retired private eye from a bygone era. The time is the present, but Ira's mind and spirit are firmly planted in the past. When we first meet him we spy a tell-all he's working on called "Naked Girls and Machine Guns, Memoirs of a Real Private Investigator by Ira Wells." Ah, the good old days.


Ira, living in a shabby rented room, overweight, hard of hearing and suffering from a bad ulcer and bad  knees, is pretty much the definition of over the hill. But, one knock on the door and things change.

A fateful evening's disturbance brings mortally wounded ex-partner Harry Regan  to Ira's doorstep. Shot while working on a case, Harry dies in Ira's room before revealing his killer and that old private eye in Ira comes back to life. His mission? Find out who killed Harry Regan.


From there we meet an assortment of low lifes and grifters we would expect in a noirish private eye story: there's the fence (Eugene Roche as the guy too nice to be nice), The fence's fussy muscleman (John Considine), the shifty tipster (Bill Macy at his slimy best) and the gorgeous, duplicitous dame who is just a red-herring femme fatale (Joanna Cassidy as a classic damsel in faux distress). And then there is the wild card, the nut with the stolen cat, the real femme fatale. That would be Margo Sperling, played by the superlative Lily Tomlin.

Ah, Margo. She is a magnificent kook. A failed actress, now talent agent and sometimes pot dealer, Margo reveals that Harry was the first private eye she hired to find her stolen cat. Ira reminds her he does not come cheap, but Margo really wants her kitty back. And so, the seemingly unrelated quests to find Harry's killer and Margo's cat become one.


Lily Tomlin's Margo bring the new age to noir. She is certainly not Ira's idea of a sexy dame, but as the two begin to work together they form a partnership that gives the other a purpose and sense of worth. Margo really does like the old guy, worries about him and ultimately admires him. Ira can't quite believe he likes this nut, but it is undeniable that they fit like hand in glove (if only she'd wear a dress). Tomlin's Margo is kind of unforgettable. Yeah, she's out there, but her delight in solving the crime proves she might just be the gal for Ira. All of her career failures lead her to him. Will he take the chance at happiness she so generously offers?

Because it's Lily Tomlin, there are some great Margo-isms (that could be Frankie-isms if you watch her in Grace and Frankie):

My shrink says I'm a very conflicted personality... plus my astrologer

Boy, it's really lucky for you that I just happen to be a very self-destructive person.

While the private eye mystery of the film is superb (Benton's script was Oscar-nominated for Best Original Screenplay) the heart of story is the relationship between two completely different characters. No way should they give one another another look without a raised eyebrow. But somehow these two misfits connect, and although there is no romance for us to see, you know the partnership will blossom into something more. And it should. They are just so good together. And that is why Margo, not Laura Birdwell, is the femme fatale of the story. She offers Ira that elusive something, that Black Bird, that stuff that dreams are made of: purpose and respect and maybe love.

Neat little film noir homages  are served up to the knowing viewer. The opening Warner Brothers logo is the logo of the 40s, not the one used in 1977. A 40-ish song called "What Was" is sung by a sultry female and the photo we see in Ira's room is of Martha Vickers, the femme fatale of "The Big Sleep." Ira's desire to avenge his fallen partner echoes back to Sam Spade in "The Maltese Falcon," and speaking of "The Maltese Falcon", Harry Regan is played by Howard Duff, radio's Sam Spade from 1946-1950. And then there is this cute little exchange between Ira and Margo after an exhilarating, harrowing and dangerous car chase leads Margo to think she may have the stuff to be a private eye:

Margo: I feel like the Thin Man.
Ira: Who?
Margo: You know, Phyllis Kirk and Peter Lawford.

This is my entry in the Classic Movie Blog Association's Femme/Homme Fatales of Film Noir Blogathon. Click here for more fatally fabulous females and fellas. 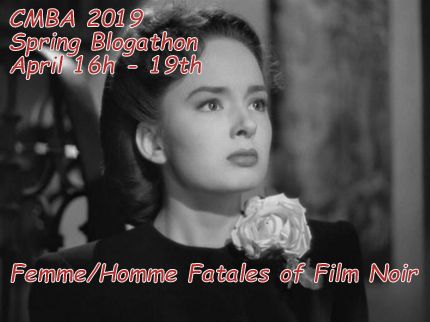