This is my entry in the Build Your Own Blogathon, hosted by The Classic Film & TV Cafe, featuring 20 bloggers over 20 days.


MANTRAP
No, Clara Bow is not the mantrap of the title (yeah right). Mantrap is the name of the little Canadian outpost where our story takes place. It's a simple story. In New York City, divorce attorney Ralph Prescott (Percy Marmont) has developed a distinct dislike for the opposite sex (agreeing that his client's husband was right to beat her – grrr… we already don’t like him). His buddy, hosiery salesman Woodbury (Eugene Pallette) suggests that what they both need is some male-bonding time in the wilderness. Prissy Ralph agrees and off they set to mantrap for some fishing, hunting and, presumably, belching.


Meanwhile, in Mantrap, good-hearted merchant Joe Easter (Ernest Torrence) is lonely for female companionship and decides to take a trip to Minneapolis to see what the big city has to offer. There, while getting spiffed up in a barber shop, he meets manicurist Alverna (Clara Bow). She's an adorable flirt, but senses that big-lug-small-town-Joe is a decent guy and agrees to meet him for dinner.

Next we catch up with campers Ralph and Woodbury, who are engaged in a fierce and juvenile battle over some wilderness supremacy. Joe happens upon the pair and figures the best way to solve the problem is to remove one of these citified gents from the fight. He offers to take Ralph back to his home in Mantrap for the rest of his vacation. Ralph agrees, thinking that is will be a blissful place to continue his pursuit of manly things without female interference.

This is when we find out that Joe has married Alverna. She greets her man at the dock and welcomes visitor Ralph with open arms. She is an incorrigible flirt, but before long she and Ralph do begin to have feelings for one another. After a spat with Joe, Alverna leaves with Ralph to head back to civilization. They endure a few hard nights in the wilderness (Alverna is more than up to the task and proves herself to be a tough survivor). Joe, frantic that Alverna has flown the coop, goes off after the couple in hot pursuit. Eventually he catches up to the bedraggled pair. While Ralph and Joe try to decide Alverna's fate, she declares that "no one is the boss of me," gets in Joe's motorboat and leaves both of those knuckleheads behind.

Since this is Hollywood, alls well must end well. Fast forward a bit and Joe is still heartbroken over losing the flirtatious Alverna. His nasty neighbors try to tell him that he is well rid of the little baggage, but when she knocks on the door and declares she has missed her man, Joe welcomes her back with a grateful bear hug. Of course, when a manly Mountie happens by, Alverna can’t help but shift into flirt mode. But she asks Joe to keep an eye on her, just in case.
Clara Bow as 21 when "Mantrap" was made, but had already appeared in over 30 films. Given a good story and a great director, she rose to the occasion and set the screen on fire. Never was she more captivating and charismatic and beautiful. Director Victor Fleming was in love with Clara during this time and it is clear that he is truly besotted with his subject. Her close-ups are luminous. Publically, he compared Bow to a Stradivarius violin: "Touch her, and she responded with genius.” And what a genius – both Torrence and Marmont are hardly romantic ideals, yet Clara makes you believe that a girl like Alverna would actually give them a second look.


"Mantrap" is based on a story by Sinclair Lewis which is apparently a misogynistic nightmare. However, in the hands of 2 female screen writers (Ethel Doherty and Adelaide Heilbron) and with the magical Clara at the forefront even that toughest of he-men directors Victor Fleming, could only see it Alverna’s way.

Clara Bow considered "Mantrap" to be her best silent film. I completely agree.

The Art of Bill Jart

You can meet the most interesting people on Facebook. Who is Bill Jart? Well, I am not quite sure. I know that he is a regular on my Flickchick's Movie Playground Facebook page and that he generously posts his amazing classic film artwork. He posts them on the star's birthday or the day TCM is showing one of their movies.

Take a peek at some tasty samples:


Bill Jart - I don't know who you are, but you are an amazing artist. Thank you so much for sharing your talent with us - your work is beautiful.

Since my slavish devotion to Lina Lamont is well known to anyone who might have stumbled by here in the past, I simply had to include Singin’ in the Rain as part of the Hooray for Hollywood series. 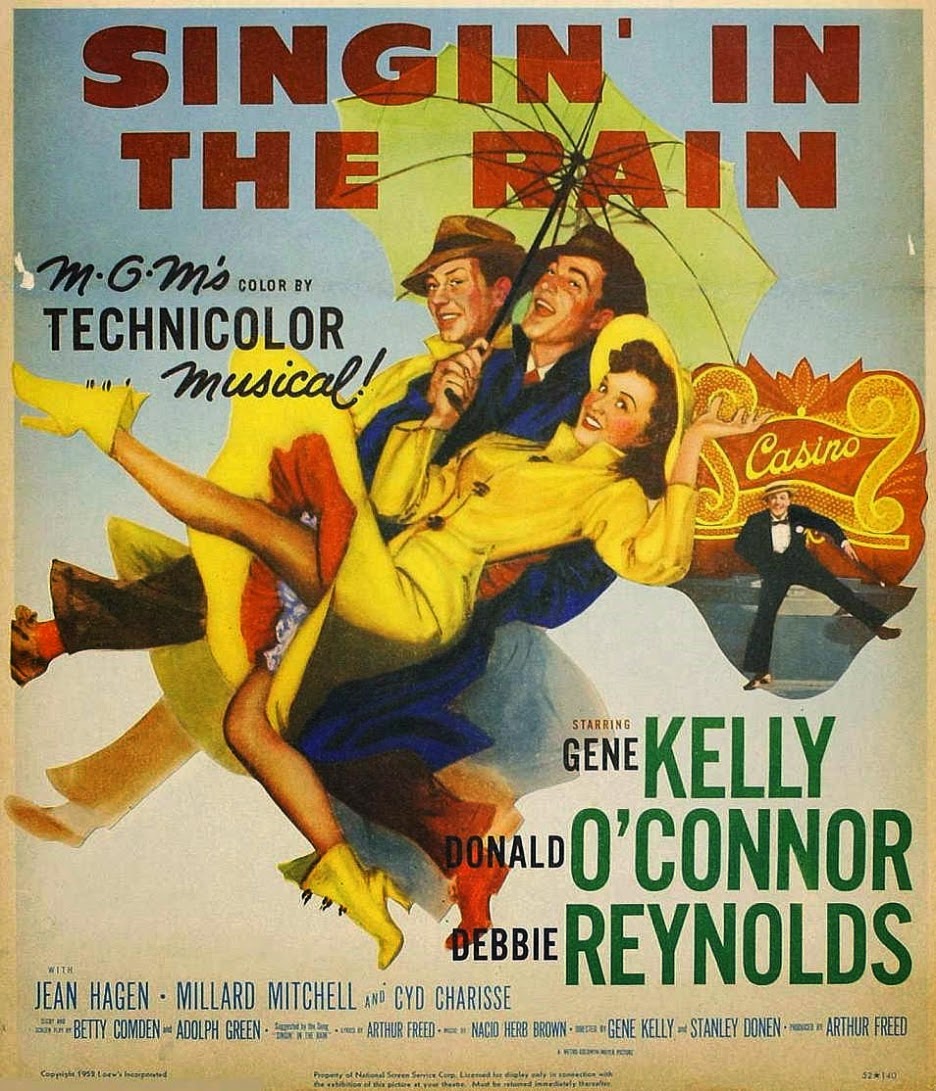 I can’t help viewing this film as a musical counterpoint to Sunset Boulevard; sort of the positive to the negative/the sun to the shade. There are those who made the transition to sound (Don Lockwood/Garbo) and those who didn’t (poor Lina/poor Norma Desmond). Filmed 20 years after the last of the silent films hit the theaters, it is an occasionally nasty, sometimes affectionate look at that moment in time when Hollywood was turned on its ear and then turned on its own. 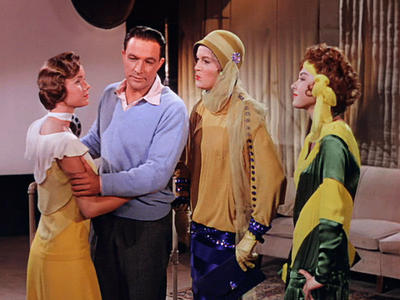 Written by Betty Comden and Adolph Green, the film is based, in part, on the memories of producer Arthur Freed and costume designer Walter Plunkett, both who lived through those traumatic changes. At the advent of sound and musicals, Freed was a lyricist, working with composer Nacio Herb Brown (their music is used throughout the film) and Walter Plunkett was wrestling with sound in such early sound musicals as Rio Rita and Dixiana. He remembered only too well how the swish of a dress or the random fingering of a string of pearls could record like a thundering herd of buffalo during those early days. Singin’ in the Rain perfectly captures the panic and the joy of the new medium. It was a topsy-turvy world where great stars (John Gilbert/Clara Bow/Lina Lamont) were toppled from their thrones and virtual unknowns were elevated to star status (Kathy Selden/Alice White/Clark Gable). Some survivors thrived (Joan Crawford, Ronald Colman) while some merely or barely survived (Gloria Swanson).
Beyond the sorrow of the twilight of the silents lay the joy of those goofy, innocent early musicals. The Dueling Cavalier becomes the Dancing Cavalier. And Don Lockwood can dance! Who knew? Beyond the diction lessons and the technical mishaps was a feeling of joy and creativity. In the depths of the Depression, silly, gleeful musicals lifted the spirits (even if some of those chorus girls could barely lift their thighs). High spirits abounded, at least for a while. Here's the 1929 version of that famous song (from the finale of The Hollywood Revue of 1929). See how many stars you can identify.
Singin’ in the Rain is a bow to the Nancy Carrolls, the Buddy Rogers, the Zelma O’Neils and the John Boles - and all those crazy kids who made us feel like singing and dancing in the rain. Zelma who? Nany who? Check out Nancy Carroll and Buddy Rogers and Zelma and Jack from 1930's Follow Thu.
And really, what’s not to love? Kelly’s Don Lockwood is a dancing Fairbanks – dashing, masculine and a joy to behold. It is my favorite Kelly performance (and that’s saying a lot).
The great Donald O'Connor really gets a chance to show how talented he was. His signature number of Make “em Laugh is unforgettable.
Debbie Reynolds was cute, but probably the most expendable cast member. She was only 19 when this was made. Her tales of Kelly as a tough task-master legendary and her gratitude to him is a testament to her professionalism. 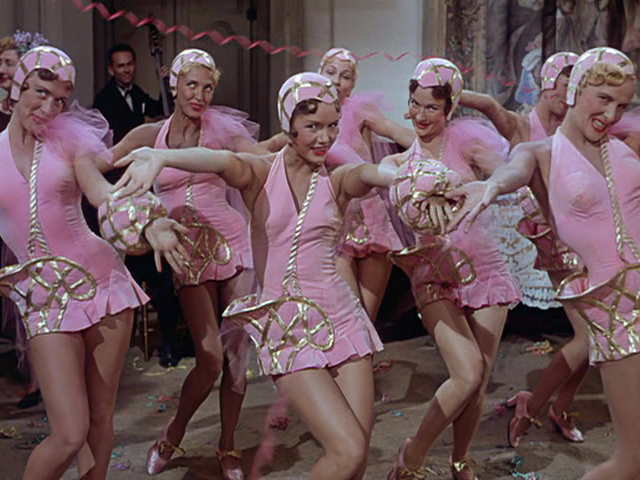 And of course, there is Jean Hagen, as Lina Lamont. There are few things in this world that are perfect and her performance here is one of them. Totally, 100% perfect. As a charter member of the Lina Lamont fan club I can only hope that she went on to buy the studio. 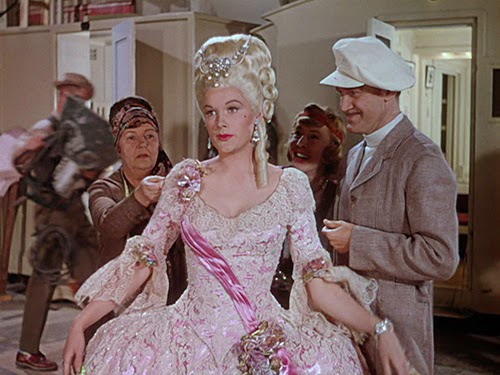 A lovely look back at themselves by the insiders who were there without the venom and with out the sadness that a parade had indeed passed by, Singin’ in the Rain remains a joy to behold.
Posted by FlickChick at 10:10 AM 15 comments: