This is my entry in the MGM Blogathon, hosted by silver Scenes. Click HERE for more, more, more about the greatest studio of Hollywood's greatest age.

With more stars than the heavens, MGM supported their stars with the crème de la crème of directors, writers, set and costume designers. In a town built upon dreams, it was the Dream Factory supreme.

One of Hollywood’s greatest costume designers, Gilbert Adrian (1903 - 1959) made his home at MGM for over 200 films. There he was able to give full expression to his vision of the glamorous, the spectacular and the divine. With one of his greatest collaborators, Greta Garbo, he created a world of exotic and elegant mystery with a foreign flair. Garbo proved to be the greatest mannequin for his vision of European glamour.


So, who would have guessed that the sophisticated Adrian would find another great muse in the star who personified the working class aspirations of American women? Someone said that Fred Astaire gave Ginger Rogers class and she gave him sex appeal. While Adrian’s collaboration with Joan Crawford elevated her into the stratosphere of world class elegance, she gave him a subject with whom he could segue from the remote and exotic to the  deceptively ordinary, a look with which 1930s depression audiences could more easily identify. The rarefied world of Garbo was done, replaced by the working girl’s trials and tribulations.

Of course, the common touch of Crawford was as much an illusion as the mystery of Garbo. Throughout the entire decade of the 1930s Adrian and Crawford showed that American style - Hollywood style - was where it was at and the world followed their lead.

Probably their greatest creation is from a film that is impossible to view today. Letty Lynton (1932) featured Joan in a ruffled white organdy gown that grabbed the imagination of American women. The story goes that Macy's, that mothership of class aspiration, copied the iconic dress and sold over 500,000. The dress was featured in Macy's Cinema Shop, which featured replicas of dresses worn by Hollywood stars.

Unfortunately, this film was almost immediately tangled in a copyright dispute and still remains unavailable. There are some crummy snippets of a bootleg version on YouTube, but it hurts the eyes.

As Hollywood transitioned from silence to sound and the world transitioned from the excesses of the 1920s to the hard realities of the Great Depression, Adrian, Crawford and MGM adapted and prospered. Together, in the darkest of times, each played their part to keep the dream and fantasy of Hollywood alive.

Movie musicals... some folks hate them and some simply love them. There seems to be no in-between. If you can suspend disbelief, give yourself over to magic and fantasy, and open your heart to the musical interpretation of life, then you must be in the category of those who love them. And if you love them, then "Dangerous Rhythm: Why Movie Musicals Matter" by Richard Barrios is for you. 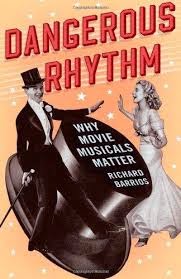 As a huge fan of Barrios' earlier book "A Song in the Dark," (one of my most favorite movie books ever), I was thrilled that he has again taken on his favorite topic. Unlike the earlier book, this one covers the genre in its entirety. This is no small feat and I expected a book the size of the Oxford English Dictionary, but it is a compact overview that focuses on several key aspects about this completely preposterous but endearing genre.

Barrios knows his topic inside out (I think he has seen just about every movie musical ever made), but his writing is conversational and witty and opinionated. If you love Gene Kelly unconditionally, you might get a little miffed (his gripe is not with his talent but his ego and somewhat abrasive personality). His comments about modern day stars like Madonna and Mariah Carey are amusing and spot on. He takes the time to throw roses at Jean Hagen's brilliant performance as Lina Lamont in "Singin' in the Rain" (a film he praises to the skies) and reserves high praise for my favorite movie musical, "Love Me Tonight."

The greatest musicals, like the greatest films of any genre, transcend their time. Those that are great use a language that speaks directly to the human heart.

The funny thing about musicals is that they refuse to die. Every time they are on life support, they somehow manage to rise like a phoenix once more. After the novelty of the late 20s, musicals were officially dead by the beginning of the 1930's. And then came "42nd Street." After the golden age of the 1950s, "The Sound of Music" and "My Fair Lady" proved that there was life in the old girl yet. And even now, as hip and self-conscious as we are, "Chicago" and "Les Miserables" brought the public to the theaters. And on it goes, as "Jersey Boys" will open soon.

Take a Chance and Win a Copy of This Book!
Interested in reading this book? it is available at most outlets, including Amazon. Want to win a copy? Take a chance and enter the giveaway. Simply send me an email at flickchick1953@aol.com and write "GIVEAWAY" in the message section. The drawing will be held on Sunday, June 22nd. Good Luck!!

Many thanks to Claire MacKinney PR,LLC for generously providing copies of this book for review and giveaway.

I admit it – I’m a little gaga over early sound star John Love Boles (yes, that is his real middle name – so fitting, don’t you think?). In an era filled with stalwart and woodenly handsome leading men, John Boles fit the bill but proved to be oh so much more.
Spoiler: if you like your boys bad, stop reading.

He was a spy!!!
Yes, it’s true. John Love Boles (I love writing that) was born in . His parents wanted their boy to be a doctor, and being, a good son, he studied and got a degree (B.A.). He also married his college sweetheart and stayed married for life (!!). But, evidently there was something brewing beneath the surface.

While attending the of , Boles joined the army during World War I and served as a spy in , and . I am coming up dry on this claim and would love to know more about these exploits. Was he an early James Bond?

Proving that you can’t keep ‘em down on the farm after they've seen Paree (or ), JLB moved to to study voice and his matinee idol looks and creamy baritone lead him to starring roles on Broadway. After a false start in , sharp-eyed Gloria Swanson spotted him back on Broadway and just knew she needed him for her leading man in her next film, "The Love of Sunya" (1927). Boles scored a huge success, even though his golden voice was not heard in the silent film.


So, how lucky for Mr. John Love Boles that the sound revolution and the explosive popularity of musical films and his rising stardom all dovetailed at the same moment? Warner Brothers knew they had a winner when they cast him as the dashing Red Shadow in the 1929 Technicolor production of “The Desert Song.”. Sadly, this film only survives as a black and white print and some pre-code high jinks have been lost. 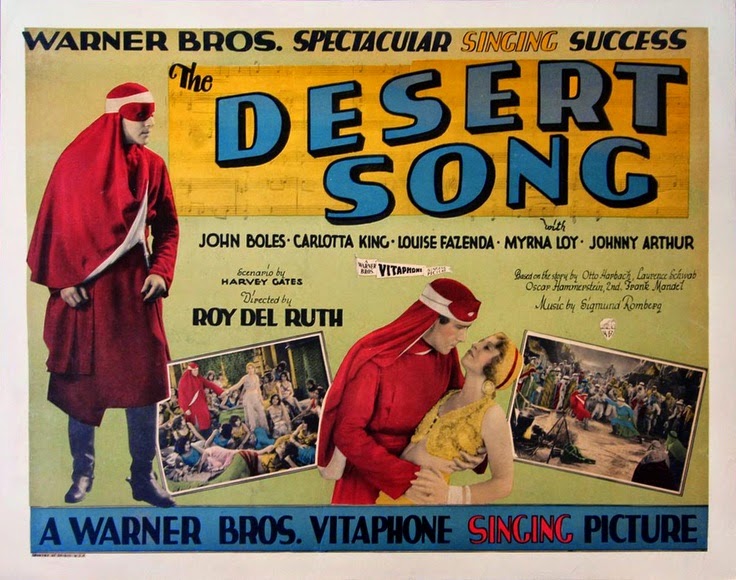 Things only got better for our man with RKO’s super-hit, "Rio Rita." Here, he and Bebe Daniels wowed audiences with their beauty and vocal talents.

Sure, these old musicals creak, but their charm, high spirits and genuine joy survive intact. Here are JLB and Evelyn Laye getting all sexy in 1931's "One Heavenly Night."

Sadly for Boles, the musical craze died as quickly as it raged, but fear not. Our multi-talented man could act! Remember him in “Frankenstein”? 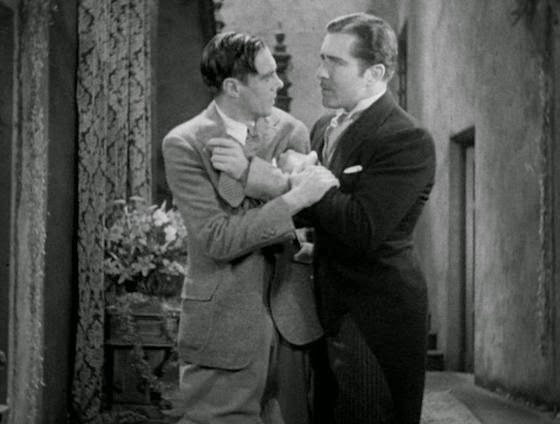 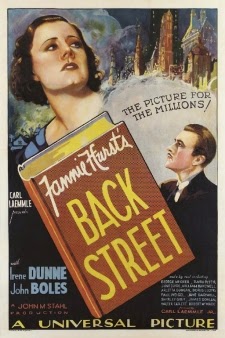 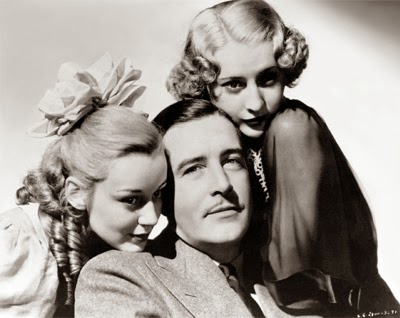 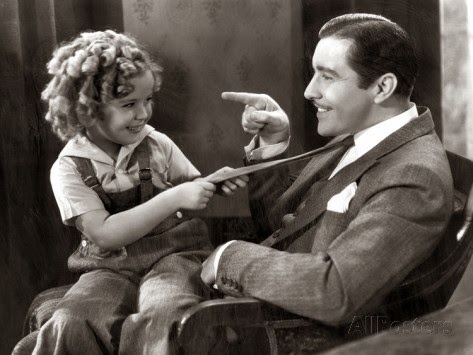 Some of Boles' other well known films are "The Age of Innocence," "The Song of the West," "Stand Up and Cheer," "The White Parade," and "Craig's Wife." He also re-teamed with Swanson in her musical debut, "Music in the Air."

He worked steadily, if quietly, through the 1930s and, in 1943, he returned to Broadway to appear in the hit play, “One Touch of Venus” with Mary Martin. He then happily toured the supper clubs and finally decided to head back home to , where he became a successful oilman.

Was there nothing this man couldn't do?

All the while, his wife of over 50 years was by his side. By all accounts, his was a happy and fulfilled life. Hmmm… handsome, talented, and nice...that pretty much sums up John Love Boles.