Clearing Out My DVR: Safe in Hell (it was hell!) 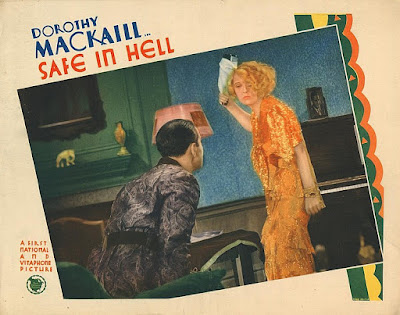 First, let me get this off my chest: I have a real issue with pre-codes lately. EVERY MOVIE MADE BEFORE THE ENFORCEMENT OF THE CODE IS NOT A GEM. There, I said it. Feeling better. Moving on.....
"Safe in Hell" is one of those pre-codes I've heard so much about, how outrageous it is, how daring, how it pushes the envelope of decency. It is and does all of that. The problem is, it's not that great.

Director William Wellman's hand is evident - tough, masculine and not especially female friendly. The story begins in New Orleans, where Gilda Karlson (Dorothy Mackaill), a prostitute, murders Piet Van Saal (Ralf Harolde), the man who started her on the primrose path. Her naive sailor boyfriend (Donald Cook) - the dumbest sailor on the seven seas - smuggles Gilda out of New Orleans to escape the murder rap and parks her at a hotel on Tortuga, a tropic island where she cannot be extradited. In fact, that non-extradition status is the reason the island is populated with a pack of leering, mostly gross criminals of varying menace (the only decent man is the black hotel employee played by Clarence Muse).

Into this cesspool walks poor Gilda, the only white woman on the island (her white vagina being the thing that puts her in danger, apparently). There is a black woman on the island named Leonie, played by the wonderful Nina Mae McKinney, who is the best thing in the film. Aside from some sassy talk and a soulful rendition of "When it's Sleepy Time Down South," she is given little to do except tend to Gilda's needs and try to help her navigate the lecherous waters of Tortuga.

The person Gilda needs most to avoid is Mr. Bruno, the human tobacco stain who runs the island with a corrupt and iron fist. He has his stink-eye on Gilda and destroys all of Gilda's letters from the sailor boyfriend, leaving Gilda feeling forgotten and doomed to a long stretch in this hell. Anyway, Gilda manages to skillfully avoid ravishment until Van Saal, the man she thought she murdered, turns up very much alive on Tortuga, running from the law and ready to resume relations with Gilda. While fighting off Van Saal's rape attempt, Gilda really does manage to kill him with the gun Bruno gave her for protection. Bruno now has Gilda where he wants her, offering her freedom from a murder trial if he can have her white vagina. Gilda, correctly surmising that death would be preferable, nobly sets her boyfriend free and marches to the gallows.

So, what set me off? I think it is pretty much the film's desire to be sensational for sensational's sake. While Gilda is tough, she longs to be a "good girl" true to her fella. And nobody here is very sympathetic. Dorothy MacKaill is okay, kind of pretty, but not really compelling. Donald Cook, as the dopey boyfriend, does a good impression of a log, and Morgan Wallace as Mr. Bruno is a drooling puddle of disgust. I did enjoy Victor Varconi (an actor I am always happy to see) as a rather polite political criminal.

A bad pre-code is like learning about your grandparent's sex life. It's kind of shocking to know such shenanigans took place long ago, but once you accept the idea, you need a good story to go with the shenanigans. "Safe in Hell" exploits all of the boundaries a film could push in 1931, but, like all things exploited for their scandalous implications, you kind of feel you need a shower after trafficking in it.

Next up on the DVR cleaning project: "Madam Satan"
Posted by FlickChick at 2:28 PM 4 comments:

A Star is Born - FINALLY!

Let me get this out of the way - I absolutely love this latest version of "A Star is Born."
Having seen all prior versions, as well as the inspirational "What Price Hollywood?", I consider this one film story that periodically begs a remake/update because none of the earlier films were perfectly realized. Janet Gaynor, Judy Garland and Barbara Streisand were already well established movie stars when they took their turn at this story, so their depictions of the girl-thrust-into-the-spotlight were always a bridge that was a challenge to cross. James Mason's star power was crushed by Judy and Streisand rolled over Kris Kristofferson. Fredric March could go toe to toe with Gaynor, but she had the advantage of being the first Esther Blodgett/Vicki Lester. Yet, Gaynor did not seem like a gal to set the film world on fire.  Judy is just a tad too mature and a too much of a raw nerve (it seemed she might be the one taking that last midnight swim), and Streisand, well, she had exploded as an enormous and instant star right out if the gate, one who clearly wouldn't need the help, much less encouragement of Kris Kristofferson to succeed. Barbra is her own cheering section always.


Now there is Lady Gaga and, truly, while watching this often told story, we are witnessing the birth of a real star. Yes, we know her from her music and her outlandish costumes, but here we see the blossoming of a true movie star. She is everything that a believable Esther Blodgett (called Ally here) should be. Her talent is scary and her self-doubt touching. Her voice and passion for music brought me to tears. In a world of fakers, she is authentic.

Speaking of passion, the love of music that binds her and Bradley Cooper's Jackson Maine (a cooler name for a rock star than Norman) is the beating heart of the movie. Sam Elliott, as Cooper's older brother, states that music is only 12 notes and it is the artist's message and interpretation that makes it unique. That is the underlying theme of this "Star." Cooper and Lady Gaga make beautiful music separately, but together they are dynamic. Each makes the other better. Each gives the other something they need.

So, I love you lady Gaga and Bradley Cooper. it has been a long time since a new film and a star have moved me to tears and, at the same time, created a tremendous excitement just watching them on the screen. I was getting a little worried there for a while, but they made me fall in love again with the movies.
Posted by FlickChick at 8:49 PM 8 comments: