This is my entry in the Circus Blogathon hosted by Critica Retro and  Serendipitous Anachronisms. Click HERE for more Big Top excitement!


"Sunny" started out with high hopes. It was based upon a successful Broadway show, had a score by Jerome Kern and Oscar Hammerstein and starred its original Broadway star, the great Marilyn Miller. Once sound films swept the nation, musicals and stage stars flooded the theaters.

Marilyn Miller was one of the musical theater's greatest stars and she seemed a natural for film. She was lured to Hollywood by Warner Brothers (Jack specifically, with whom she had a cozy relationship) and paid a then astronomical figure of $100,000 to film her greatest sage hit, "Sally." It was a smash and Warners quickly planned to film another of Marilyn's stage hits, "Sunny."

Sadly, by the time "Sunny" was ready for release, the onslaught of musicals (specifically bad musicals) resulted in a public backlash against the genre. Too much of a bad thing set "Sunny" back and the result was a musical without hardly any music. Since the music was the whole point of the show, movie-goers were left with a "Sunny" featuring a silly and paper-thin story (British circus performer loves an engaged man, stows away on a ship to America and marries another man to gain entry and then divorces said man and gets her guy) without the music to support it. To add insult to injury, the leading man (Lawrence Gray) is a pill. Imagine if it was Fred Astaire......

Still, "Sunny" has much to offer, chiefly the lovely Miss Miller. No matter how much Warners may have wanted to cut the musical numbers, it was unthinkable to put their star in a movie without several dance numbers. And this is where she shines. I offer you exhibit #1 below. When she says' "let's have some fun, you can see she really means it.

They also could not omit the show's hit number "Who?" Marilyn wasn't a great singer, but the poor quality of the sound doesn't do her any favors. Still, her star power gets her through. Here she is with the uninspiring Mr. Gray.

Personally, I found Marilyn's performance in "Sunny" even more appealing than her performance in "Sally." She comes across as quite an adorable and cheeky woman and looked lovely once she was adorned in her non-stowaway clothes. It's a shame that there was only one more film in store for Marilyn before she headed back to Broadway. I thought she had quite a nice comic touch when not trying to play the innocent.

Another joy is the inclusion of Joe Donahue as the hapless fellow who Sunny marries and then divorces. Joe was the brother of Jack Donahue, a favorite stage dancing partner of Marilyn Miller. While his film career was pretty non-existent, he and Marilyn pair comfortably in "When We Get Our Divorce." Since I can't find a stand alone clip of their dance, I am posting the entire film and ask you to go to 58:17 to see this delightful pairing.


Sadly, much of the music was cut cut from the film before release in the US. The existing version of "Sunny" is pretty tattered and badly in need of preservation. A full musical version of this film that included the entire original score was released outside of the US (where they apparently had not yet tired of musicals). Oh, if only this version would surface!
After one more (non-musical) film, Marilyn Miller returned to Broadway in the aptly named "As Thousands Cheer." Sadly, she would die in 1936 at age 37. Still, the legacy of the darling little circus girl, Sunny, still lives on. If you happen to be in New York City at the corner of Broadway and 46th Street, look up. She is there surveying her kingdom of Broadway. 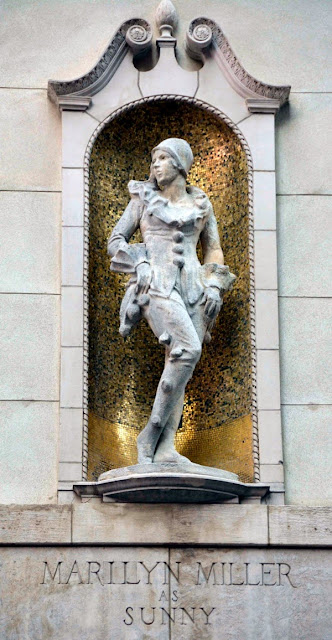 Interested in knowing more about Marilyn Miller? Check out "The Other Marilyn," by Warren G. Harris.