There is no shortage of tragic star stories from Hollywood, but few stars ever get to write of their own dramatic demise. 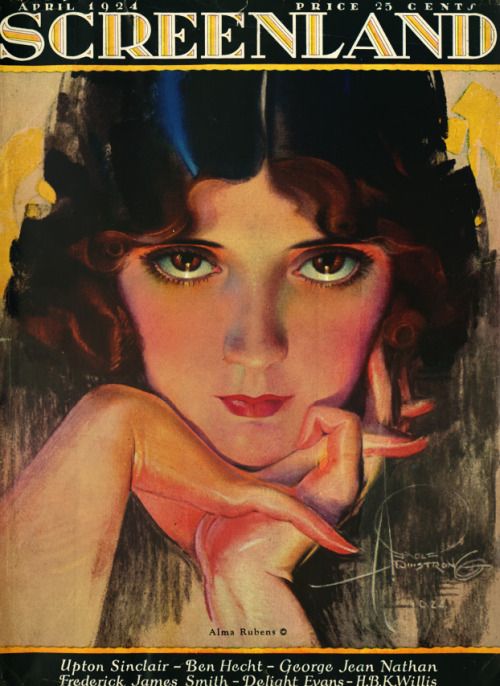 Alma Rubens is remembered not for her successful (but short) time as a movie star, but for the drug addiction that cut her career and her life short.
In a serialized autobiography, published in several newspapers and magazines in 1930 - 1931 and called “Bright World Again,” silent star Alma Rubens told her harrowing tale to the public. Beautiful, talented and married to sexy heart-throb Ricardo Cortez, Alma seemed to have it all. How could this stunning and successful girl go from glamorous star to pathetic addict in just a few short years?

Alma's story starts with a poor but loving childhood in San Francisco. From the beginning, her mother was the one constant and stabilizing force in her life. But Alma was a wayward girl. She had a strong sense of adventure and was easily tempted to stray off the path she knew was safest.  In order to help her family, Alma needed to work, but clerical or retail jobs were not for her. Her pretty face and form got her noticed and, by 1916, she was in the movies. An early marriage to the much older star, Franklyn Farnum, lasted only a month or so, with Alma claiming he dislocated her jaw. Poor little Alma, she seemed so gentle, but was always getting into scrapes.

Alma worked her way down from San Francisco to Hollywood, managed a contract with W.R. Hearst’s Cosmopolitan Pictures and married her second husband, Dr. Daniel Carson Goodman, doctor and prominent film producer.  In Hollywood, Alma began to live a lavish life style, with beautiful clothes, furs and jewels.  However, Alma was restless. And sneaky.  Like other stars (notably Wallace Reid), Alma’s drug troubles started when she was treated for an injury. Her addiction was swift and Alma spares no one, not even herself, in her harrowing tale of her swift and painful decline.

At the beginning of her addiction, Alma managed to maintain her career, divorce the doctor and marry Ricardo Cortez (in 1926). Meanwhile, she was very adept at finding doctors to provide her with more and more morphine, her initial drug of choice. As she became increasingly dependent on the drugs, she became unreliable, unprofessional and unable to work. Her contract with Hearst was dissolved. She worked for a while at Fox and Columbia, but mainly kept very busy selling her personal possessions to feed her habit (notably some silken undergarments to a drug-dealing maid). Mother and husband tried to help her.  She was admitted several times to private sanitariums, but Alma proved to be an unwilling patient. Several times she escaped, even wounding a doctor with a knife. Finally, her family had enough and committed her to Patton Institute, surely the model for any psychiatric horror story every filmed.  Truly, the Snake Pit would have been an improvement. At Patton she suffered, and suffered greatly. Her awful story has to be read to be believed. Her dignity and sanity were compromised. But, after 7 months, she was released and she swore she was done with dope.


But, Alma never could stay away from it very long. Truly, this woman’s appetite for drugs was astounding.  In an effort to jump start her career, Alma and her husband went to New York and appeared together in a Vaudeville act in 1930. It seemed that the public liked Alma and she always got good reviews for her work. So much more the shame that she just could not kick her habit. In New York she and Cortez split (although they did not divorce) and Alma sunk into the depths of depravity, going to drug parties,  giving into random sexual encounters and running from the cops. She sold everything she owned, including furs and the last of the expensive lingerie, and ended up rooming with other ladies who shared her struggle.


Time and time again Alma tried to kick the habit, but her addiction was too strong. In 193- she penned her story as a cautionary tale (and a bid to make some much needed money) and set off across the country to go home to California and her mother. She and a friend were travelling by car and she knew in her heart that if she didn’t leave New York and return home to her mother she would die. Her story ends with the hope that she will be able to achieve her dream.
Sadly, by the time Alma’s story was printed, she was dead. Arrested in San Diego on the suspicion of smuggling dope from Mexico she was jailed. Her mother came to her rescue, but by then, Alma had developed a cold that worsened into pneumonia. Her system, so weakened by abuse, could not combat the infection and on January 21, 1931, she was dead. It was confirmed that, at the time o her arrest, she was drug free.

Sadly, Alma’s screen achievements are largely forgotten. Her one foray into sound films, 1929’s “Showboat” (as Julie), is in tatters, with the sound missing.  Her fame rests on her tragic tale.


Alma’s story in her own words and a brief biography can be found in Gary D. Rhodes' and Alexander Web's “Silent Snowbird.”

In 2015, Patton opened a museum, a record of the horrors of the treatment of addicted and mentally ill patients in the early 20th century.  By 1930, over 2,000 patients who died at Patton were buried on an on-site cemetery. The cemetery was full in 1930. The unclaimed bodies of those who died after that date were donated to science.
Posted by FlickChick at 7:04 PM 10 comments: