Maybe it's the state of affairs all around us, but I've been in a particularly sensitive mood these days...for so many days, it seems. Almost anything can make me bust out in tears - usually something beautiful; a song, a moment from a film, a memory. And when it comes to comedy, I simply can no longer abide the joke cloaked in meanness. 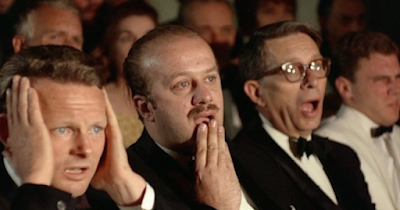 So, here's the funny story. When I saw the topic for the CMBA Blogathon, I jumped at the chance to select "The Producers," my go-to comedy that never fails to make me laugh. However, once I started to put a few thoughts down on paper, it all seemed vaguely familiar. And no wonder. I had written about this same film in in 2012 CMBA Comedy Blogathon and in the 2018 CMBA Outlaws Blogathon. What's that quote about insanity? 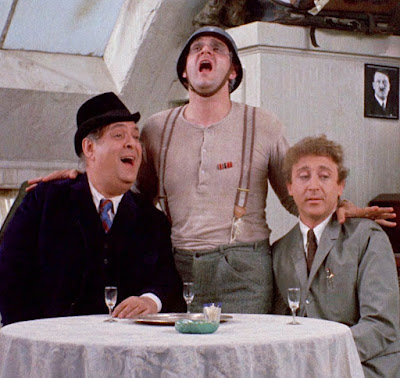 Anyway, I picked it yet again, so now I'm faced with the challenge of saying something different about it. I mean really, I felt I had said it all in 2 pretty decent articles. And yet here we are again - me, Mel, Max and Leo. So, here are the links if you feel inclined to read about the film:

This time I'm doing something a little different.

First, let me bow down in awe of the great Mel Brooks. Almost all of my comedy gods are gone, some long gone before my time. But, praise whoever, Mel is still here with us and I firmly believe the world is a more joyful place because he is here (that goes for you, too, Jack Nicholson, but that's a whole 'nother story).

Here's the great man accepting his Oscar for Best Screenplay (after some shtick from Sinatra and Rickles -ah those were the days when the Oscars were fun).

The tale of 2 swindlers who give us "Springtime for Hitler" is a love letter to the comedy traditions of vaudeville, burlesque and early television. It is humor put forth with the adolescent's complete conviction about what is funny. And who is braver and freer than the adolescent before the world of adults infects him or her with self-doubt? I am so grateful Mel never grew up. 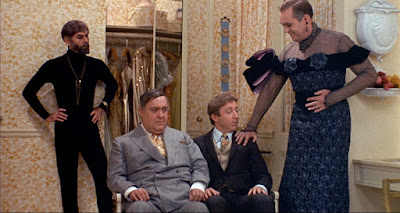 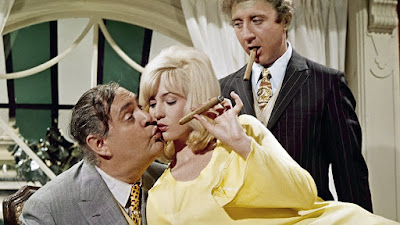 The secret ingredient here - and all great comedies have one of those, don't they? - is love. The important presence of Zero Mostel as Max is offered with love for all that he is here - and all that he went through in the past. His Max is outrageous, venal, a joyous liar and an entitled thief, but somewhere in there, there is love. Somehow, one feels he is loving the moment, no matter how perilous. There is also love between Zero and his Leo (Gene Wilder, so sweet in his first big role). Mel's humor is based in love. That is why we can laugh at Hitler. That is why we can laugh at 2 Jews ditching their swastika armbands in a trashcan after they secure the rights to Franz Liebkind's Nazi-fueled fever dream of a play. Deep in our hearts we want to believe love wins. 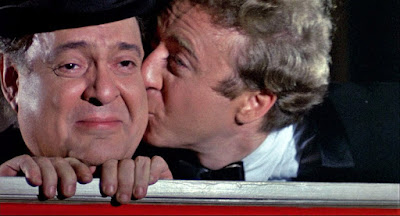 When our hearts are so broken by the world, it takes a loving heart to mend them. And a funny loving heart? Even better. Well, leave it to that great humanitarian Mel Brooks to give us so generously what we need. "The Producers" says come play with me, come revel in the bawdy, uninhibited humor that obliterates hipness and coolness. Cleverness is merely humor without humanity. Artificial Intelligence can be clever. It takes a human being to give us Springtime for Hitler: A Gay Romp with Adolph and Eva at Berchtesgaden. 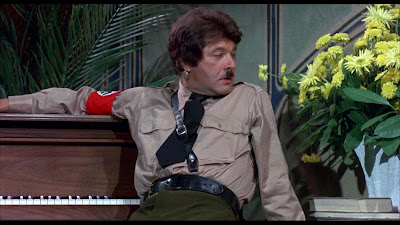 This is my contribution to the Classic Movie Blog Association's Laughter is the Best Medicine Blogathon. Click here for more needed comic relief. And boy, do we need it! 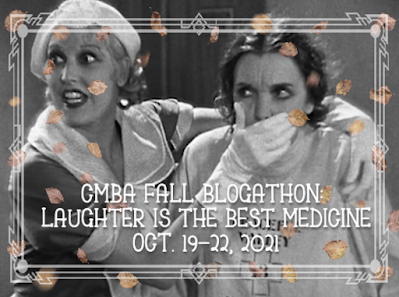