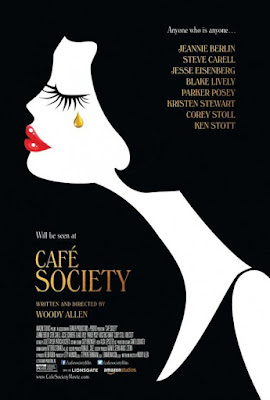 There I was, blissfully enjoying “Café Society,” Woody Allen’s latest film, on its own merits. The setting of Hollywood in the golden 1930s was a home run for me and the characters and plot were pure Woody – whose work I always enjoy. So, imagine the extra  jolt of pleasure when I started seeing similarities to one of my favorite films, Billy Wilder’s “The Apartment.”

Allen’s hero Bobby (played by Jesse Eisenberg, an acceptable Woody-stand-in) is a young man of ambition, wanting to leave the hum-drum fate that would surely be his by following his father’s footsteps in Brooklyn, to the glamour of Hollywood. Lucky for him, his uncle Phil (Steve Carell, who just seems too nice) is a big shot agent. Like C.C. Baxter, he is a young man who is eager to succeed.

After some false starts, Bobby finds a place in his Uncle’s office,  but the place he would like to be most comfortable is in the arms of his Uncle’s lovely assistant, Vonnie. Vonnie clearly likes Bobby and the 2 become good friends. Bobby wants more and Vonnie holds back. She has a boyfriend. And so, like CC Baxter waiting outside the Music Man for Fran Kubelik, Bobby waits for a romantic dinner with Vonnie. But both ladies had other plans.

I was riding along on a single track with Woody when the breath was knocked out of me a bit as Vonnie met in a darkened restaurant with her lover, who just happens to be Bobby’s Uncle Phil – Vonnie’s boss and Bobby’s, too. It was the same breathless reaction I had when Miss Kubelik meets Mr. Sheldrake for the first time. A little shocked, a little sad.

As Vonnie keeps her double life secret, both Bobby and Phil pursue her. Unlike the cad Sheldrake, Phil actually does leave his wife, but not before he does much soul searching (Woody is never as cynical as Billy Wilder).  In both films, an important item sets our clueless heroes straight. For CC Baxter, a broken compact reveals the heartbreaking truth that the girl of his dreams in having an affair with her married boss.

For Bobby, a framed letter love letter from Rudolph Valentino to an unnamed amour that sits on Uncle Phil’s desk provides the same shattering realization. In the end, Vonnie chooses Phil and Bobby’s hopes are crushed. What if Sheldrake had left his wife for Fran? “Café Society” presents an alternate view of “The Apartment’s” triangle, a photograph in negative.

The break-up only reinforces Bobby's need to return to New York where, working with his gangster brother, he helps run a fashionable night club. His rough edges get polished, his confidence grows and he even marries a beautiful shiksa goddess (whose name is also Veronica – go figure - and played by an impossibly nice Blake Lively). All is well (well, except that the brother is executed) when, years later, Phil and Vonnie visit the café and old memories, never far from the surface, are again stirred. It all culminates at a New Year’s Eve party, just like in “The Apartment,” but instead of a happy ending for the lovers, both are left with the melancholy longing for the road not traveled.

The choices made by the characters in both films determine the outcome. Phil chooses to change his life for Vonnie and his decision made her chose him. Sheldrake, tossed out by his wife, chooses Fran by default, but she chooses CC Baxter. Fran remains true to her self, while Vonnie changes (as most people do). While Woody is more romantic than Wilder, he is also a sadder and wiser realist operating in a sadder and wiser world. In 1960, perhaps there was hope that CC and Fran would make a go of it and stay the same sweet kids who leave us playing gin. In 2016, we know it is most likely that Vonnie and Bobby would not risk all for love without a gilt-edged guarantee.