The Cinemascope Blogathon: Move Over Darling (and Cary, Irene, Marilyn, Dean and you, too, Enoch Arden)

While 1963’s “Move Over Darling” can never top it’s inspiration source (1940‘s “My Favorite Wife” with the dynamic duo of Cary Grant and Irene Dunne), it stands on its own as a delightful piece of movie fluff. Good fluff isn’t easy. Fluff has to be light, airy and delightful. While many a film has aspired to just those qualities, they fall as flat as a heavy, stuffy and cloying soufflé baked in an oven full of cigar smoke. 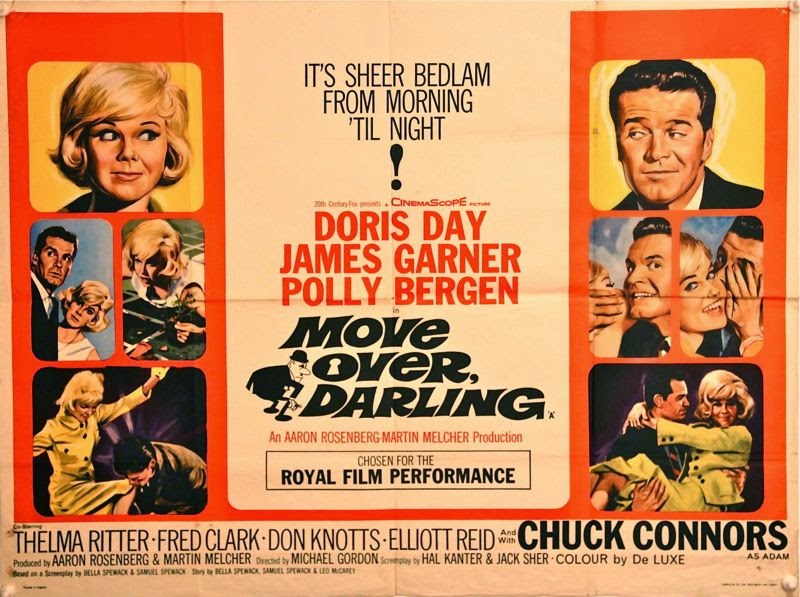 Based on the Enoch Arden poem (of a fisherman who is presumed lost only to return home years later to find his wife and family have moved on and are happy), Ellen Wagstaff Arden (get it? Arden) is presumed lost at sea in a plane crash. Fast forward 5 years and husband Nicky is ready to move on by having Ellen declared legally dead and marrying Bianca Steele (she of the clanging charm bracelet) the very same day. But wait! Ellen has been found, is alive and well and must hurry to get her family back before the new marriage is consummated. She manages to scuttle the neurotic Bianca, but Nicky must contend with the hunk named “Adam” who shared that island with his “Eve,” Ellen, for those lost 5 years.

I know – silly stuff, but representative of all that I love about Hollywood films. Sitting in the theater with my mom, I fell in love with Doris Day the minute I saw her. How did she manage to look so darn cute without benefit of modern beauty supplies?

Mother Arden is played by the incomparable Thelma Ritter. I don’t care what she is doing; she elevates the film by just being there.

Mother-in-law wants daughter-in-law back and the 2 become partners in crime against the unsuspecting newlyweds.

And look how pretty Doris looks once she is dressed in fashionable clothes. Once hubby sees her, he can't believe his eyes.

James Garner and Doris Day have great chemistry. Both are charming and beautiful, but totally comfortable and natural. Don’t be deceived by their ease with their material and with one another - these are film artists at work. It's never easy to make it all look so easy.

Meanwhile, back to the honeymoon that won’t happen……

Naturally, the reunion does not go smoothly. Nicky, that dog, has taken Bianca to the same honeymoon hotel that he shared with Ellen. And Bianca (the adorable and lovely Polly Bergen) will not go quietly. She wants sex on her honeymoon, and Nicky has a hard time putting her off (mainly because wife #1 is in the room next door with her ear to the wall). In order to calm Bianca down and find a good way to tell her that the dead wife has returned and he much prefers her, Nicky fakes an injury.

He returns home with his frustrated bride, only to find that Ellen is keeping an eye on them by impersonating a Swedish nurse who gives a wicked massage. Bianca finally has her fill with these lunatics and decides she should seek solace with her shrink.

At last Ellen and Nicky can reunite, except that Nicky finds out that Ellen was not alone on that island.  A series of deceptions ensue (with Ellen, fearing that Nicky won't be happy knowing she shared the island with a hunky Chuck Connors, trying to enlist the puny Don Knotts to play her island companion). See? The story is silly, outdated, and kind of dumb but with Doris Day, James Garner, Polly Bergen, Don Knotts, Chuck Connors, even John Astin and Edgar Buchanan - come on, it’s like a big old hug from a Hollywood comfortable shoe.

In 1963, at age 10, this film produced 2 scenes that made me laugh so hard I never forgot them. The first was the scene with Doris Day giving Polly Bergen a Swedish massage that turns into a jealous pummeling. The second was Doris driving through a car wash in a convertible with the top down. It tickled my funny bone then, and, frankly, still does. 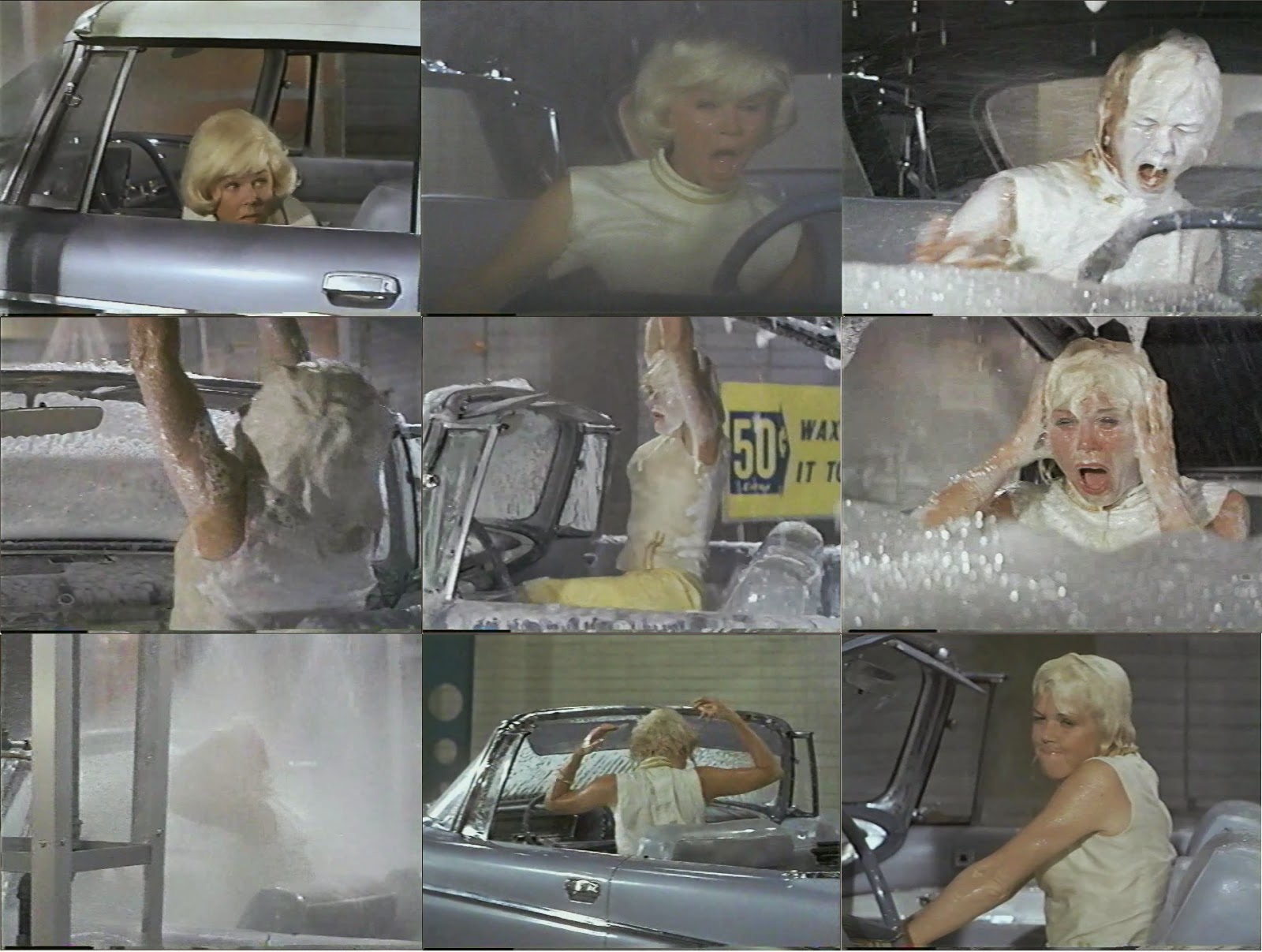 Aside from some fond memories, this film has some gorgeous shots of the pool at the Beverly Hills Hotel, where “Adam” works as a lifeguard.

Once Nicky learns that "Adam" is looks like Chuck Connors rather than Don Knotts, his imagination runs wild. Just what were Adam and Eve doing on that island for 5 years?

As most everyone knows, this was the last film Marilyn Monroe was making before she died. Only a bit of film was shot, but one can only wonder what might have been. 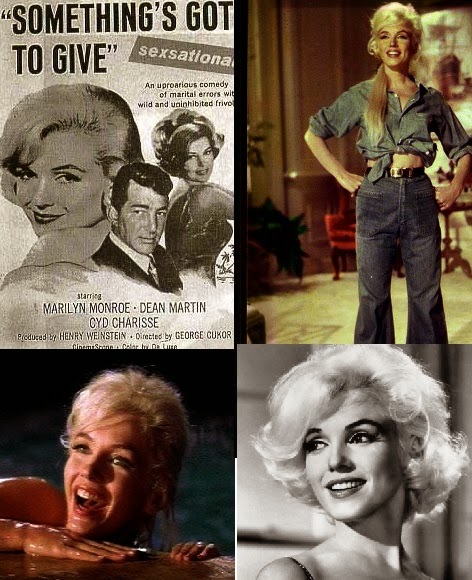 Her co-star was to have been Dean Martin, who begged off of the film when, after Monroe’s death, Lee Remick was cast as Ellen. Eventually we ended up with Doris and Jim – more wholesome, I’m sure.

There’s a kind of disturbing part of the story concerning the children. When Ellen appears to them, they have no idea who she is. What did Nicky do – burn every photo of Ellen?

Of course, all’s well that ends well and Nicky and Ellen and the little girls all reunite for one big pool party. By the way, Jim looked mighty nice in that bathing suit. Okay, so it wasn't "My Favorite Wife," but it was fun and in modern, colorful eye-opening Cinemascope - just the way we liked it back in 1963! 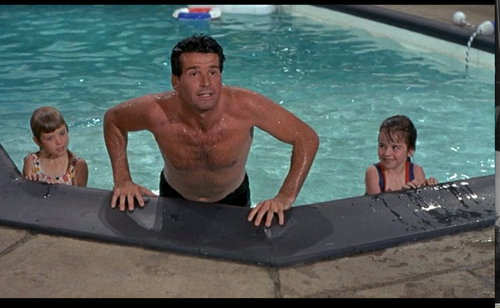 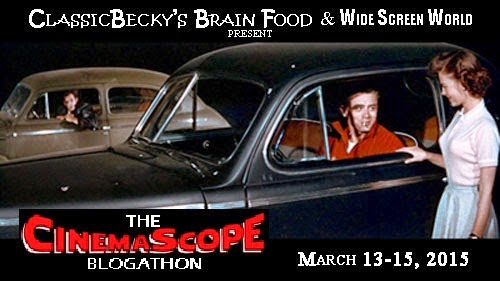 Oh those Russians - so passionate, so revolutionary, so ...Russian! This is my entry in the Russia in Classic Film Blogathon hosted by Movies Silently. Click here for a complete list of participants. 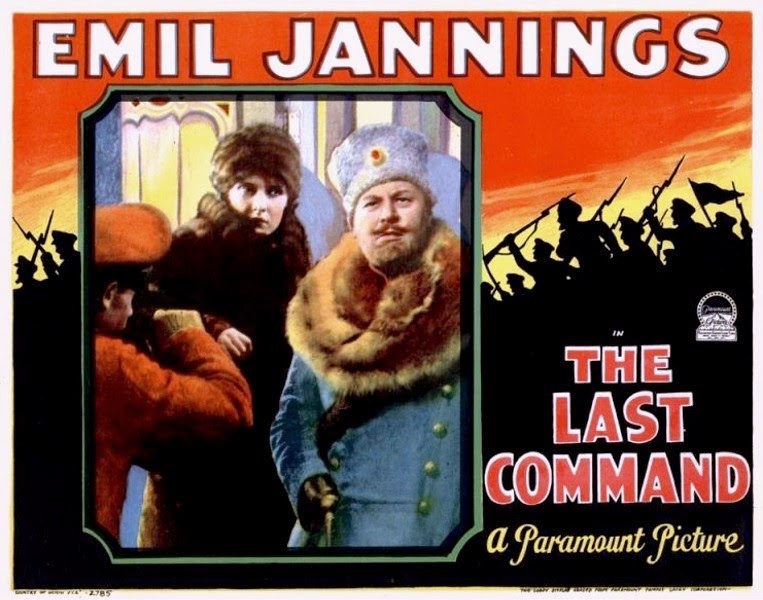 Josef Von Sternberg's "The Last Command" (1928) has it all: World War I, the Russian Revolution and Hollywood all rolled into one great film. Based (kind of) on a true story, "The Last Command" tells the story of a great Russian General/Grand Duke who falls victim to some Bolsheviks and ends up as a Hollywood extra working for $7.50 a day.

While thumbing through some photos in search of the right face for a small part of a Russian general, Hollywood director Leo Andreyev (William Powell) comes across a familiar face.  He instructs his assistant to call the man and have the extra report for work in his film.

The lowly extra (played with brilliance by Emil Jannings) suffers the indignities of the cattle call at the Hollywood studios. He appears to be a man who has suffered a great deal. As he gets ready to go on set, the old actor flashes back to Russia in 1917. No longer is he a desperate actor working for crumbs. Instead, he is Grand Duke Sergius Alexander, commander of the Russian Imperial army and cousin of the Czar. He is also the owner of a luxurious fur coat, coveted by his underling, and a riding crop.

The General is a bit of an arrogant elitist and treats his staff with disdain (in one of many ironic scenes throughout the film, we had earlier seen that director Andreyev treats his staff in much the same manner). When an underling is found wearing his beautiful coat, the General humiliates him, threatening to save the coat and shoot its contents if the offender ever dares wear it again.

Not only does the General have to contend with the daily stress of world War I, he also has to be mindful of the revolutionaries that threaten the very foundation of Imperial Russia. Passports are routinely checked to weed out these revolutionaries and 2 questionable passports cross his desk one day: one for the dangerous revolutionary Leo Andreyev and the other for the equally dangerous and extremely beautiful Natalie Dabrovna (Evelyn Brent). Both are working as actors who entertain the soldiers while surreptitiously participating in Bolshevik activities.
The General decides to amuse himself with these 2 and has them sent to his office. An angry exchange with Andreyev results in the General slashing the actor across the face with his whip. Andreyev is quickly whisked off to jail, but the General decides he would like to keep Natalie around as his "guest." To her surprise, she learns that the General is a man of honor who deeply cares for his troops and loves his country as much as she does. Her grudging respect eventually turns to love.

The train on which the General and his company, as well as Natalie, are travelling is intercepted by revolutionaries and Natalie, in an effort to save him, pretends to despise him and allows him to be humiliated. She helps him escape (returning to him the valuable pearls he had earlier given her; these will finance his way out of the country). While the General lies dazed from his leap off the train he watches in horror as the same train, carrying Natalie, veers off its tracks and plunges into an icy river.

Fast forward to Hollywood and a dramatic reversal of roles: Andreyev is the powerful director and Sergius is at his mercy. At last the 2 enemies come face to face. Andreyev hands the General a whip, telling him that he knows Sergious knows how to use it (ouch).

Sergius prepares for his role as the Russian General in the trenches, but something snaps. When an actor in the scene tells him his has given his last command, the General loses his grip on reality and imagines that he is once again on the battlefield fighting for Russia. After an impassioned performance, he collapses. Andreyev, who has no cause to be kind to him, assures him that the Imperial army has won. An assistant notes that it was too bad the old man died because he was a great actor. Andryev, understanding the love of Russia that binds them, replies that he was also a great man.

The film is totally Jannings' show. His power is undeniable and his performance was awarded with the very first Oscar for best actor (along with his work in "The Way of All Flesh"). William Powell is clearly poised for stardom and is convincing and alluring as the revolutionary turned Hollywood director. And speaking of alluring, Evelyn Brent is a perfect Von Sternberg muse as the complicated Natalie.

The love for Russia crossed class lines and continents, uniting Czarist and Bolshevik in a crazy place called Hollywood in this masterful and unforgettable Von Sternberg classic.