True Confessions: Why I Cheated on Cary Grant with Gilbert Roland

This is my entry in the Hollywood's Hispanic Heritage Blogathon, hosted by the delightful Aurora at Once Upon A Screen. Click here for more fantástico entries.


It's Your Lucky Day, Aurora!

My devotion to Mr. Grant is pretty well known. In fact, the hostess of this wonderful blogathon has, from time to time, tried to insert herself into our happy romance (I'm watching you, Aurora). Well, my dear, this is your lucky day. Today I am stepping out on Mr. G and he's all yours for 24 hours. (Oh, and by the way, he's cool with this, so enjoy).

I try very hard not to let an artist's personal story influence my ability to appreciate their art. For example, I don't think I'd like to share a confined space with Woody Allen, but I sure do like his films. I might not want Joan Crawford inspecting the cleanliness of my home, but, wow, I pretty much plotz over the lady on screen. And, look, I know there are some things that are just over the line, but let's not go there today. Let's just stay with this train of thought and not go off the tracks.

It took me a little while to zero in on the charms of Gilbert Roland. I think I first became aware of him as an older, but very handsome, actor who appeared in supporting roles. He always seemed to be around and, for some reason, I was very happy to see him whenever and wherever he showed up, both in movies and on TV. And then there was this: 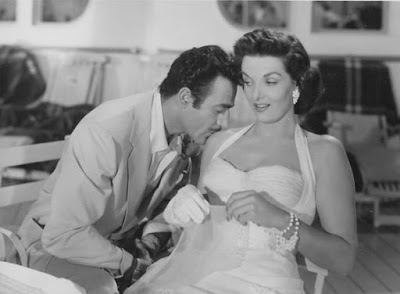 I was pretty gaga over Jane Russell a few years ago (still am), so I checked out "The French Line" and saw a younger version of that handsome Hispanic fellow, Gilbert Roland. He was a hottie! As Jane's french suitor (crooning "Wait Till You See Paris" in a creamy, dreamy baritone), he knocked my socks off, leading to that brain-throb well known to classic films fans as MUST KNOW MORE! (By the way, TCM, YouTube and Google are known antidotes: prior to these, only the Public Library and late night TV provided any relief).

So, I learned all about the handsome Mr. Roland. Born Luis Antonio Dámaso de Alonso in Mexico, he made his way(via Texas) to Hollywood at a time when the Valentino Latin-Lover type was in vogue. Luis became Gilbert Roland (allegedly the name is a combination of stars John Gilbert and Ruth Roland) and quickly worked his way up from extra to leading man. Apparently, his good looks were not lost on the ladies. One of his first big breaks came as Clara Bow's co-star in "The Plastic Age" (1925). He and Clara, both only 20 years old, became engaged, but their youth and Clara's bigoted creep of a father put the kibosh on the romance. He later had a flaming romance with Norma Talmadge (his co-star in "Camille") that set tongues wagging and enraged her husband, mogul Joseph Schenck (apparently Schenck threatened to castrate Roland, who then took to parading around in the buff at his club to demonstrate the empty threat).

Gilbert Roland survived the talkies and continued acting, mostly in large supporting roles, until 1982. A few of my favorites are  "The Bullfighter and the Lady" (1951), "The Bad and the Beautiful" (1952) and the crazy "Call Her Savage" (1931) with former flame, Clara Bow. He made a few films in the 1930s with Constance Bennett, who he married in 1941. While still married to Connie and while serving in the military during WWII, he apparently had a very secret affair with Greta Garbo (can you blame her?) This only came to light after Roland's death when a pair of GG's silk panties were found in his possession. Such a sentimental man!

Yes, Gilbert Roland was handsome and sexy, but he seemed to be more than that. There is something kind and compassionate about him in every performance, something that makes you feel as though he would be a loyal, caring friend. So, imagine how wonderful to learn that he was exactly that in real life. After divorcing Constance Bennett, he married again and remained married to the same woman for 40 years until his death in 1994. He was known as "Amigo" and that seemed a perfect nickname for him.

One of my favorite stories about Gilbert Roland is one about a letter written to Clara Bow many, many years after their affair. Clara, who had suffered with mental illness and much unhappiness, held on to this precious correspondence from a former lover but a forever friend:

I am truly sad that you don't feel well. Sometimes when I go to church and I think of you, I say a prayer. It will be heard. God hears everything.

You tell me that you long for your boys. I share your feelings. My daughters are with their mother in Wiesbaden, Germany. And there is nothing I can do, except cry a little once in a while.

It seems you are in my thoughts.
It's good to feel that way.
It's good I have never forgotten you.
God bless you.

For more about their brief affair but lasting friendship, click here.

So, for my money, Gilbert Roland was more than just a Latin Lover. He was the real deal - handsome and virile and truly, truly a gentleman and good person.

Marion Davies: Thumbs Up Or Thumbs Down? (Part 1)

While getting to know more about the work of Marion Davies, it became clear to me that I had to divide her work into two segments: silent films and sound films. This post deals with Marion's work in silent films. 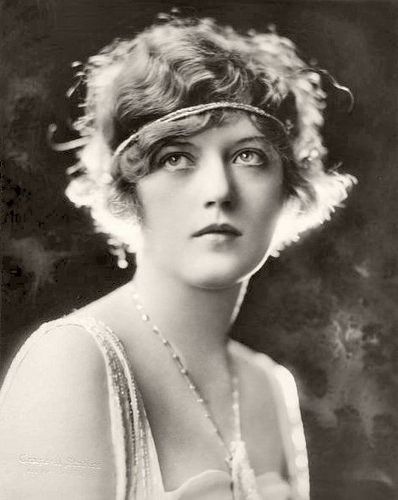 Let's cut to the chase: a HUGE thumbs up for Marion Davies' silent film body of work.👍


Marion's story is well known: New York stage actress catches the eye of William Randolph Hearst, becomes his life-long companion outside of his marriage, emerges as a big movie star in the silent era with his backing, as well as an important figure in the social scene in Hollywood (and San Simeon, Hearst's castle north of L.A.). Her reputation was enhanced by constant promotions in Hearst papers and forever tarnished by the common assumption that the character of Susan Alexander in Orson Welles' "Citizen Kane" was based upon her (Welles denied it).

Let's allow Marion's work to speak for itself. I viewed 4 of her silent films before writing this post, hoping to get to know this legendary actress a little better. 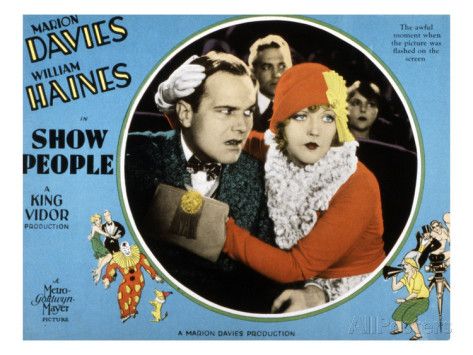 "Show People" is one of Marion's best known silent films. I had seen this film before, and had a good opinion of it, but on second viewing I confess I simply fell in love with her. While Hearst liked to see her in romantic, damsel-in-distress roles (that weirdly called for her to impersonate a boy at times), Marion's true talent was in her funny bone. As Peggy Pepper, she is so delightful it almost hurts. I wanted to just reach out and put my arms around her and give her a big hug. Oh, and the endless list of "A" list cameos is mind boggling. 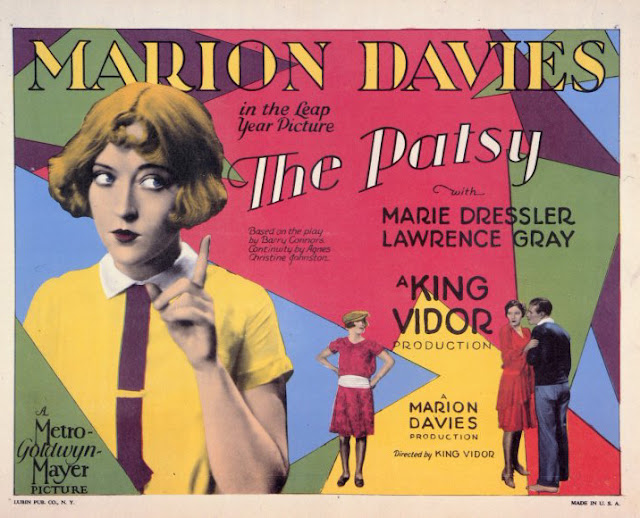 "The Patsy" is the other Davies silent film that has remained well-known and popular. And for good reason!

Marion's comedic flair again gets showcased in this Cinderella story of a less-beautiful sister (major acting challenge here) who is the better person. While Marion's character of Patricia Harrington seeks improvement through a number of funny self-help programs in order to appeal to the man of her dreams (who, of course, is engaged to her older, supposedly more beautiful sister), Marion wins our hearts and her man. Major highlights are Marie Dressler as the bullying mother and Marion's dead-on impersonations of silent stars of the day. 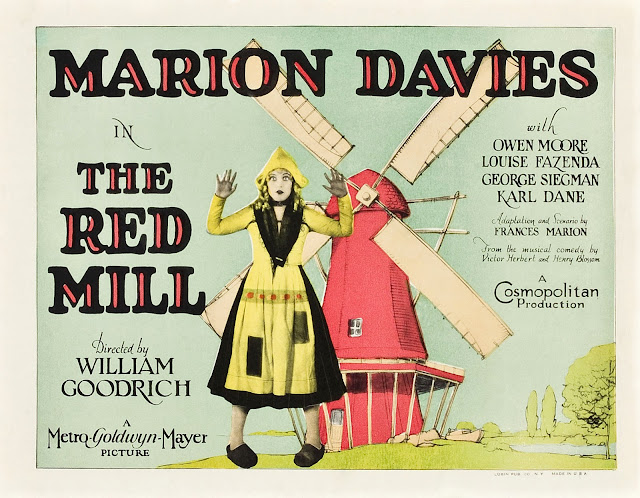 This film was a little more challenging. I can't say I was thrilled with the subject matter (thwarted love in old Holland), but Marion is, as always, adorable and amusing (Karl Dane and Louise Fazenda supply a great deal of the comedy). This film is also interesting because it was directed by Roscoe Arbuckle under the pseudonym of William Goodrich. It is ironic that Arbuckle found work in Hollywood in a Hearst picture after the Hearst newspapers effectively killed his career with yellow journalism. One has to believe that Marion's influence played a part in this. It was also interesting to me to see Owen Moore in a starring role. Known only to me as Mary Pickford's nasty first husband who stood in the way of her union with true love Douglas Fairbanks, I was quite impressed. He was charming and had a nice ease about him - not hard to see why Mary fell for him. 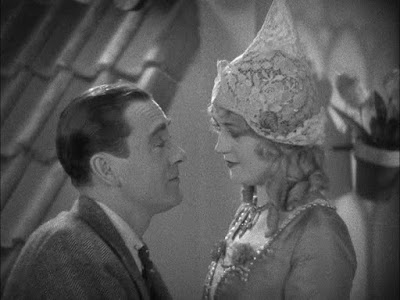 When Knighthood Was in Flower 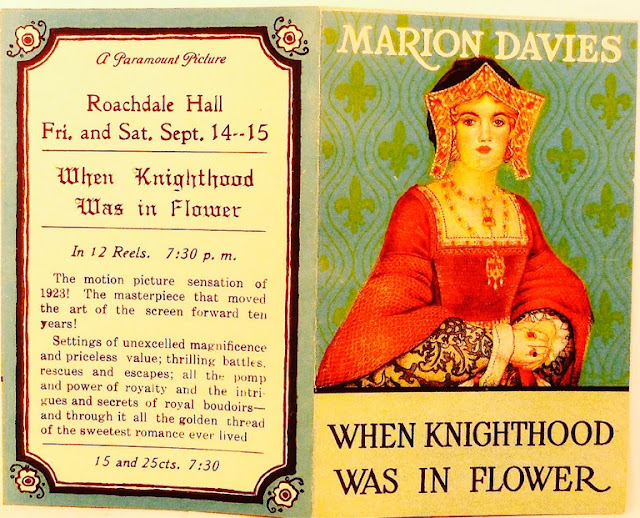 I saved the best for last, because this film was a total revelation for me. I was lucky to be able to see a newly restored version on the big screen with live accompaniment by the great Ben Model.
Filmed in 1922, "When Knighthood Was in Flower" was a mega production (reportedly costing up to $1,500,000) and represented Heart's full-throttle push to make Marion as beloved by the movie going public as she was by her adoring suitor. Verdict? It worked! Beyond the expensive sets and costumes, Marion's delightful personality and charm and talent shines through. She is everything in this film. Without her, it is just a lot, and I a mean a lot,  of stuff. If you ever want to surrender to the spell of Marion Davies, see this wonderful film. As Mary Tudor, she is downright adorable (I keep using that word, but there is no better one to describe her) while pursuing true love.

In 2017, the audience absolutely ate her up. Murmurs of appreciation of her beauty and talent continued throughout the film. So, in silents, big great big, unequivocal thumbs up for Marion Davies' silent film work. She clearly stands the test of time. 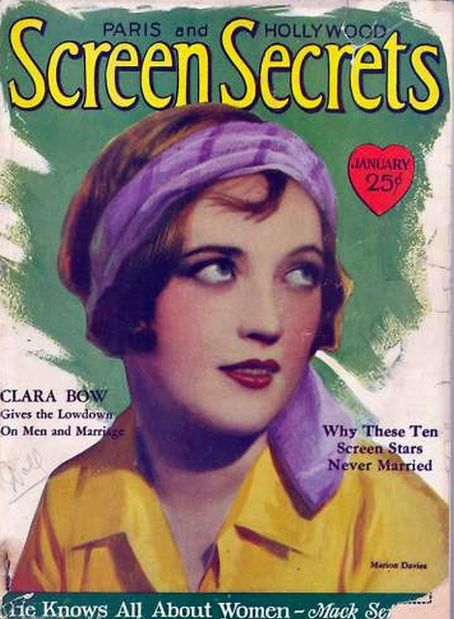 Next up: Marion Davies talks.
Posted by FlickChick at 12:55 PM 4 comments: