This is my entry in the CMBA Hollywood on Hollywood Blogathon. Click HERE to read more about films that focus on our favorite town in the world.

Before I ever saw Ann Sheridan,  George Raft and even Greta Garbo in a movie, I knew who they were because of the Warner Brothers Merrie Meoldies cartoon "Hollywood Steps Out." 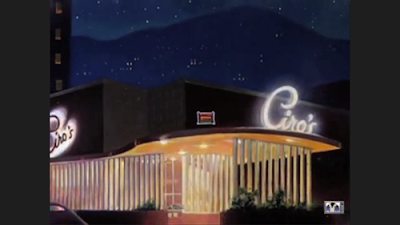 On a "typical" night at Ciro's, more stars than there were in heaven graced that famous watering hole. When I asked my mother "who's that?" she identified the star and their reputation as lampooned in the cartoon.

Ann Sheridan? She was known as "The Oomph Girl" because she had lots of sex appeal.

Greta Garbo? She was a Swedish star known for her big feet. Cary Grant? He used to say "Judy, Judy, Judy."
Speaking of Garbo, I love her reaction when Harpo gives her a hot foot:

Bing Crosby? He was a singer who liked to go to the racetrack. He is the guy who hosts "The Hollywood Palace."
George Raft? He was a tough guy actor who became famous flipping a coin. 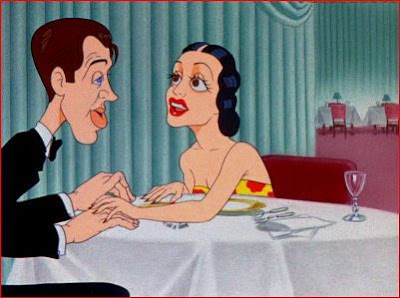 And a night at Ciro's would not be complete without these guys. I did not need my mother to identify them!
Naturally, a wolf (namely Clark Gable) is on the prowl, but his prey is not exactly who he thought "she" was!
There are many more stars and even an appearance "gee"man, J. Edgar Hoover!


In a way, this little cartoon was my introduction to a whole host of Hollywood stars and the mystique of Tinsel Town. It was all done with affection and admiration.

Please, sit back and enjoy this little gem. I just love it!


Voices were provided by this talented trio: