This is my entry in the What a Character Blogathon hosted by Once Upon a Screen, Outspoken and Freckled, and Paula's Cinema Club. Click here for more about our favorite folks who don't need star billing to shine.

For me, the best character actors are the ones who press that automatic happiness button that's wired in our movie-loving brains. As soon as they appear, you recognize them and the world - movie-wise, that is - is a better place. Like a cuddle under a warm blanket or the platonic hug from an old and dear friend, certain actors who operate below the star billing can provide us with a sense of reassurance. Once they appear, we know everything is going to be fine. And even if it isn't, well, we thought it might.

My introduction to the stars of classic films came through television. Older stars who worked in TV were identified by my mother (See Alice Faye on "The Hollywood Palace"? She used to be a great big star). When it came to movies,  I was a Warner Brothers gal from the get-go, chiefly because those were the only films my local TV station seemed to show. Plus, they really did have the best roster of supporting players, didn't they? So, it was only natural for me to recognize that guy playing an immigrant from some foreign land as good old Abner Kravitz from "Bewitched."

Warner Brothers cornered the market on New York types (my favorite type, by the way), and George was no exception. Having spent most the the 1920s and early 1930s on the stage, he committed to Hollywood in 1939 and somehow became everybody's favorite immigrant. Some of the roles played by this nice Jewish boy were an uncredited Soviet in "Ninotchka," Sascha in "Music in My Heart," Pasha in "Affectionately Yours," Igor Propotkin in "Out of the Fog," Nick Popoli in "My Wild Irish Rose," and Vassili Markovitch in "Silk Stockings." Two of my favorite George Tobias immigrants are Rosario La Mata in 1940's "Torrid Zone" and Nicholas Pappalas in 1941's "Strawberry Blonde." In both films he supported James Cagney, and they seemed to go together like peanut butter and jelly.

Somehow, somebody thought George would make a good Central American revolutionary in "Torrid Zone." Despite the questionable believability factor here, George plays his role with such ingratiating good humor and gusto that you just have to root for him to escape justice and live to fight another day.

The other part I adore him in is as Nick the Greek barber in "Strawberry Blonde." As the usual best friend he gets some very funny lines, my favorite being "boy how those foreigners murder the English language" in his heavy Greek accent while observing a German band singer. Noting that the beautiful strawberry blonde of the title (Rita Hayworth) would not have turned into a nagging shrew if he had married her, he states that "a woman who has 17 children got no time to nag."

In 1943, George got to show another side of himself in "Thank Your Lucky Stars," a Warner Brothers showcase of performers who donated their salaries to the Hollywood Canteen. Supported by Olivia de Havilland and Ida Lupino as jitterbuggers, George donned a zoot suit and, as always, gave it his all. For once he got support from "A" list leading ladies.

When not playing a fellow from some foreign land, George also turned up everywhere and anywhere as the good friend of the hero. Never a double-crosser, he was reliable and sympathetic, and when he sometimes met his demise as the script demanded, you can't help but miss him (thinking "Captains of the Clouds" here).

And then there was Mr. Kravitz. George did lots of television and when he landed on "Bewitched," well, what can I say? He was the fellow I was always happy to see - just like in the movies. 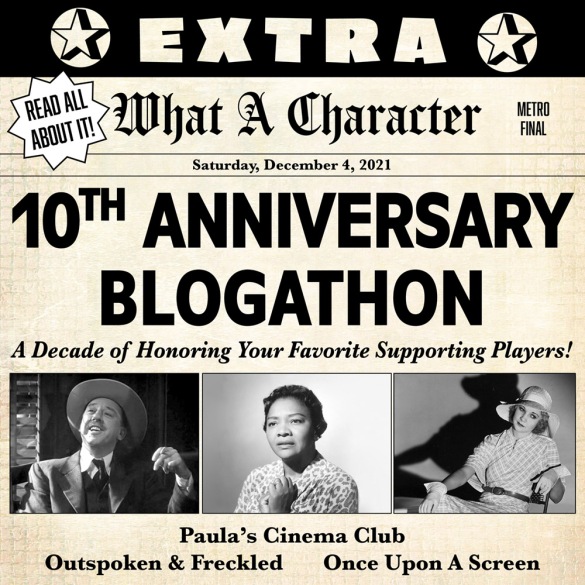 Posted by FlickChick at 7:25 AM

Email ThisBlogThis!Share to TwitterShare to FacebookShare to Pinterest
Labels: George Tobias, What a Character!

So happy to read about Mr. Tobias here. I love what you said about the familiarity and comfort of certain actors and he is at the top of the list.

A story. Setting Grade 4 during recess. The conversation turned to your favourite actors on TV. I said mine was George Tobias. Growing up in a movie buff family it was important we know those whats-his-name fellows by their names. The other kids looked at me like "I had lobsters crawling out of my ears." I told them he was Abner Kravitz and they said "Why didn't you say so?" I think I got the weirdo label that day.

I just saw MUSIC IN MY HEART when I did a tribute to Eric Blore not long ago and loved it thanks - in large part - to Mr. Tobias. What timing he had and, as you so eloquently state, he is often the funniest part of any movie he's in. I love, love this entry and all the details on Tobias, but I especially love how you open describing character actors in general and the why of what they mean to us. Spot on and it got me a bit misty. Thank you so much!

I loved George Tobias as Mr Greco in Margorie Morningstar as the owner of the Catskills resort who is always looking for gate crashes !.Reminded me of the hotel owners I encountered when I tried to sneak my cousins into a room!

Hi CW. As always, thanks for the kind comments. As one movie-nerd-weirdo to another - I get it!

Hey Aurora - thank you again for hosting. Can't wait to make the rounds and read the posts. Regarding the misty eyes - there seems to be a lot of it on this blog these days - what's happening???

Lawrence! Many, many thanks for stopping by and taking the time to comment. Marjorie Morningstar is one of my guilty pleasures. Gene Kelly was so sad and sexy here and Natalie Wood wore a mesh bathing suit that was to die for.

You're absolutely right- it makes me happy to see George Tobias whenever I see him, in a film or on TV. He definitely possesses that "character charisma." Thank you SO MUCH for joining our blogathon. Aurora, Paula, and I are delighted to have fun bloggers like you join in on this special event!

Many times I've wished George Tobias had more screen time in his films.

Thank you, Kellee for co-hosting this annual must-read event. I'm already thinking of a character for next year!

Hey Ruth - thanks for stopping by. Well, George Tobias might have been George Sanders' nicer brother.

Coincidentally, I seem to be running into George fairly regularly these days. Watched both Passage to Marseilles and Between Two Worlds very recently and have been watching Ninotchka with some frequency lately. All that to lead up to saying you have nicely nailed George - and the the sense of reassurance we feel when certain character actors appear (Felix Bressart is one who always soothes me). Great stuff, Marsha!

Excellent piece on George Tobias, whom I love, from Abner to all those quirky accent roles. Tops is his song and dance with Olivia de Havilland and Ida Lupino. Who ever thought up that? Marvelous.

Thank you, Obscure Trivia. I am enjoying all of the wonderful posts in this blogathon.

Ah, Lady Eve, I think it is virtually impossible NOT to run into George when watching movie of a certain age. He seemed to be everywhere.

Hi Jacqueline. Isn't that dance adorable? I'll bet they had fun doing it.

Perfect choice for the blogathon. Like you said, whenever George Tobias shows up on the screen he makes you feel as if everything is alright with the world. That face can't help but exude warmth and comfort wherever he is placed. I love that dance too, and will have to give it a rewatch soon! Thanks for a delightful read and remembrance!

George Tobias had such a nice face. I honestly can't decide which of his movies I like best--he did so well in all of them.

Thank you Classic Movie Muse. He sure did have "one of those faces."

Rebecca - ha ha - it seems it was all in George's face. Norma Desmond was wrong. Even after the silents, they still had faces.