The Reel Infatuation Blogathon: From Healthcliff to Hurstwood, I love Sir Larry

This is my entry in the Reel Infatuation Blogathon, hosted by Silver Screenings and Front and Frock. Click here for more crush-worthy posts (but hold on to your hearts).

Upon his knees he sank, pale as smooth, sculptured stone -
John Keats, The Eve of St. Agnes

I'm a child of the 60's, so all things British stirred my adolescent heart and mind. The Beatles, Hayley Mills, Carnaby Street, Slicker lip gloss and Twiggy, to name a few, fueled my imagination and longings. So, it was only natural that, one night while thinking I should see the local station's airing of Wuthering Heights, I should fall madly, deeply, hopelessly in love with the British hunk playing that devil, Healthcliff.
For those of you who don't remember life before Google, a girl had to to really be motivated to follow up on her classic movie star crush (especially if concerned a 30 year old movie and a star no longer considered "hot.").
Thanks to my local library and the trusty card catalog, I studied Mr. Olivier's filmography and patiently waited for Pride and Prejudice, Rebecca, Henry V and That Hamilton Woman to appear on TV.
I scoured the TV Guide every week looking for his films. Sometimes, they aired in the middle of the night. Luckily, I had a small portable TV in my room that allowed me my private early morning thrills in peace without disturbing the whole family.

I wasn't even jealous when I learned that he was once half of the world's most beautiful and glamorous couple in the 1930's and 1940's. He and Vivien were sublime together.
Along the line, I managed to stumble upon 1952's Carrie (like Wuthering Heights, directed by William Wyler), and it was then that my crush evolved into something more: my heart was broken by the beauty of his performance. The sadness and desperation of his portrayal of the ruinous autumnal love of George Hurstwood is something I can never forget and is one of my all-time favorite film performances.
Reel infatuations come and go (the memories of some still make me cringe - what was I thinking?), but I can't help but congratulate myself on the very good taste I displayed on this particularly massive crush.
Posted by FlickChick at 8:50 PM 7 comments:

Order in the Court Blogathon: Pandora's Box:The Guilty Face in the Mirror

This is my entry in the Order in the Court Blogathon hosted by the criminally wonderful Lesley at Second Sight Cinema and Theresa at Cinemaven's ESSAYS from the Couch. Click HERE for more posts. It's so much fun, it feels like it should be illegal! 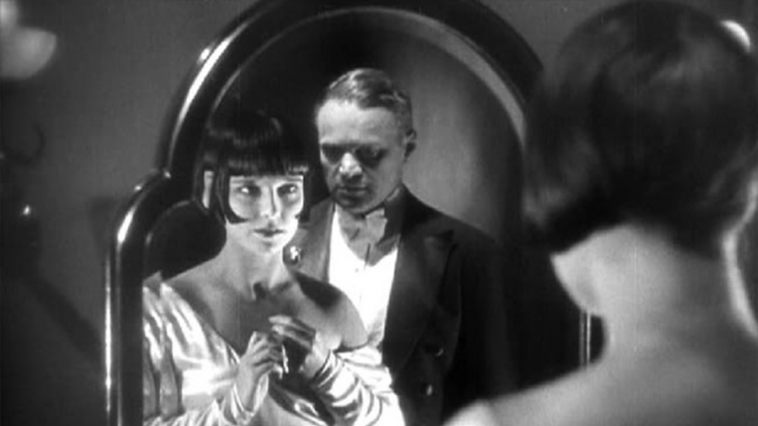 Guilty or innocent? Usually, that's what the jury must decide about the person on trial. But sometimes, the guilty are not placed in the witness box. 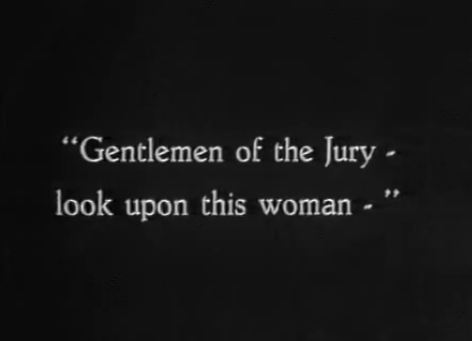 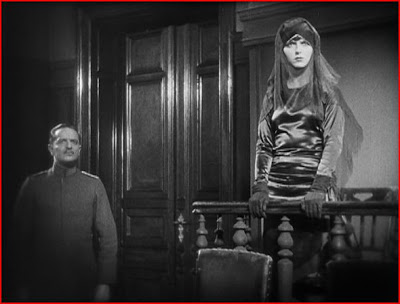 Ladies and Gentleman of the blog-reading public, look upon these men. 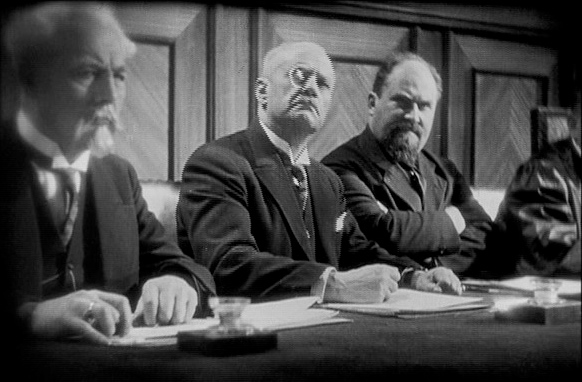 Upstanding men of the court and jury, all, and all are convinced that if a woman drives them nuts, it must be her fault. And so, in 1929's "Pandora's Box," the innocent becomes the guilty party.

Yes, Lulu is a tramp, and a darn good one. You see, she was raised for it by the odious Schigolch, the pimp who most likely is her loving pa. But, Lulu does not resist. In fact, she excels in the family business. So much so that she attracts the attention and lust and obsession of the middle-aged, oh-so-respectable Dr. Schon.  Truly, she brings out the beast in him. 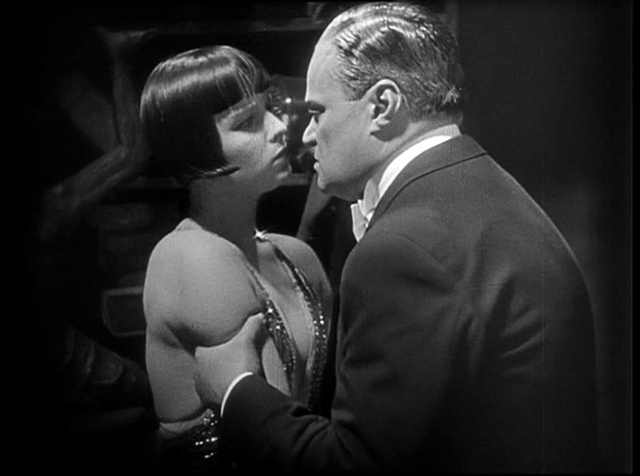 The raging beast that is Schon’s shameful desire leads him to the conclusion that Lulu should kill herself and remove the temptation from his life. Girls and boys – you’re following this, right? But, Lulu accidentally shoots Shon in a struggle. Was it an accident? It appeared to be so, but, really, I don’t blame the girl if she sort of aimed the gun at his gut. 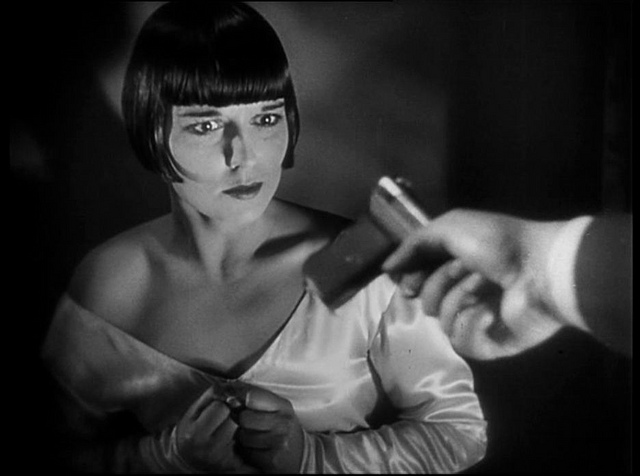 Her trial is a sham, but the court room scenes are brilliant. Lulu, looking like the innocent little hottie she is, pleads her case. But it is clear that those high-minded hypocrites only see Schon as a member of their boy’s club. They look in the mirror and recognize Schoen as one of them: established, respectable, a pillar of the community. Therefore, the tramp must be guilty. 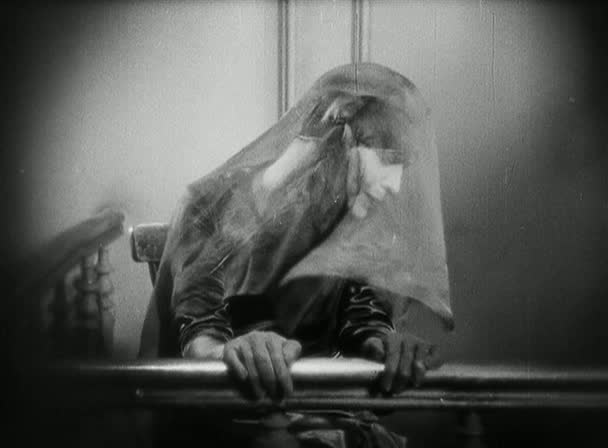 Director G.W. Pabst parades their misogyny for all to see and they are resolute. Lulu has her supporters: her lover, Alwa (Schon's son), the Countess Geschwitz who developed a real yen for Lulu, and other sundry past lovers and reprobates who live on the lower rungs of society. But, they are viewed as the undesirables, even though the pillars of society desire their prize, Lulu. She is sentenced to 5 years in prison for her crime, but her friends pay no heed to the law. The deck is stacked against them and they know it. They spirit Lulu away from the courthouse amid a false fire alarm and she and Alwa are helped out of the country by their friends. They eventually land in London, where Lulu, desperate, gets picked up by Jack the Ripper, another charming fellow. 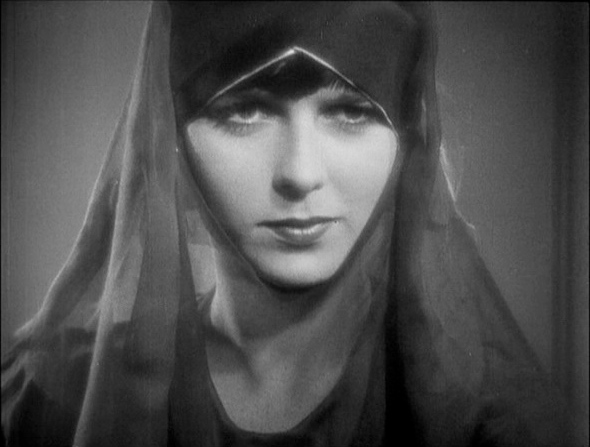 Louise Brooks has been praised mightily for her performance, and rightfully so. She and Pabst create a pleasure-loving innocent who means no harm, but continues to be a lightening rod for bad things happening to bad (or at least questionable people. One can never be quite sure what is going on with Lulu. She is neither good not bad, innocent not guilty. She just is. She comes to her lovers as a blank piece of paper. Her story is written by the men who are disgusted with themselves by their desire for her. They look in the mirror and only see a victim, never a perp.