This is the second in the "Bitches and Blaggards" series; monthly posts devoted to my favorite movie bad girls and rogues. A bitch is a selfish, malicious woman. A blaggard is a villain, a rogue and a black-hearted man. Both are bad, both are devastatingly alluring. 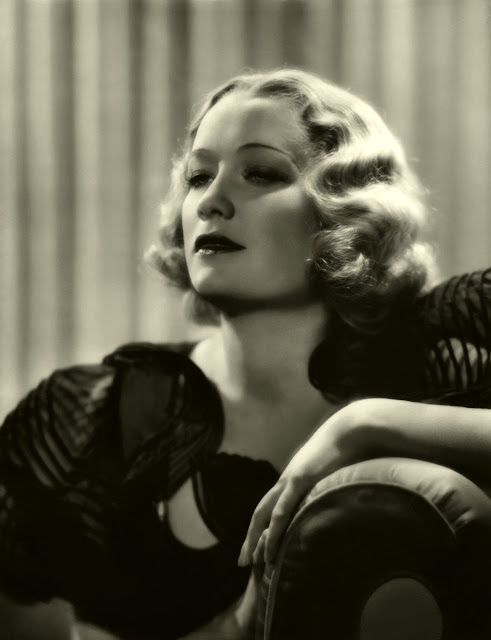 The reaction to Miriam Hopkins is usually one of you either love her or hate her - no in-betweens. Regardless of your feeling for her, it's hard not to admire the elevated level of bitchiness to which Miriam could rise in some of her  portrayals. Even when she wasn't quite a bitch, she sure seemed like one.
Miriam's bitch-career falls into two distinct periods - pre and post "code." The pre-code Miriam was often a saucy minx; a morally questionable cutie with spice and zest. Post-code Miriam had the minx sucked out of her. Apparently, a minx without sauce equals a bitch.
I would never classify Bette Davis as an all-out bitch. Although she played some very nasty ladies, with a few exceptions Bette always had the sympathy of the audience. Miriam, whose delivery was compared to "cracked ice" by film historian David Shipman, rarely played for sympathy. Like all good bitches, she was completely self-sufficient and focused on the mission at hand.  Her pre-code Becky Sharp, Lilly of Trouble in Paradise and Gilda of Design for Living, while not full-fledged bitches, are not burdened by any doubt whatsoever. They know who they are, make a play for what they want, are awfully cute doing  it, and, win or lose, move forward. A favorite of Ernst Lubitsch, Miriam was given some very choice roles in the early 1930s.
Post-code Miriam's bitch persona blossomed. And, just in case there was any doubt, she was actually dubbed a bitch by Bette Davis, who famously feuded with Miriam in 2 of her best films. 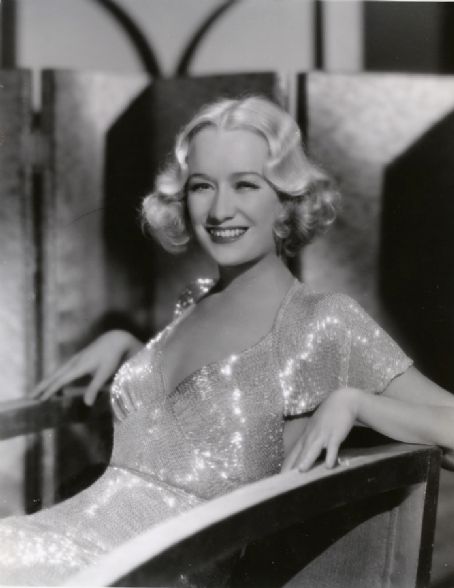 The Old Maid (1939)
In Miriam's first film with Bette Davis, she scores points for bitchiness as the spiteful Delia who wrecks Charlotte's (Bette Davis) chance for respectability and tries to steal her daughter's love, to boot. All's well that ends well, but the two divas antics off screen became legend. Bette resented Miriam's shameless scene-stealing and Miriam was convinced that Bette had an affair with her husband, Anatole Litvak. While Delia ultimately does the right thing and reunites mother and daughter, Miriam's bitchiness in 95% of the film is the real treat.
Old Acquaintance (1943)
As the jealous, trashy novelist to Bette's refined and elevated (but unsuccessful) author, Miriam is a dream (or nightmare, depending on how you look at it!). Her Millie is a scheming, devious bitch. But, while not quite BFFs, she and Bette eventually reconcile while the claws are just barely concealed. You just want to slap her - and when long-suffering Bette shakes Miss Miriam within an inch of her life - well, you just know how she feels!
Another great later bitch role for Miriam was Julia Hurstwood in 1952's Carrie. As the rejected wife of Olivier's Hurstwood, she refuses him the divorce he so desperately wants in order for him to act out his autumnal passion for the much younger Carrie. But really, why should Julia give up her social status just because her husband was having a mid-life crisis? Sometimes, a bitch has gotta do what a bitch has gotta do!
Warren William 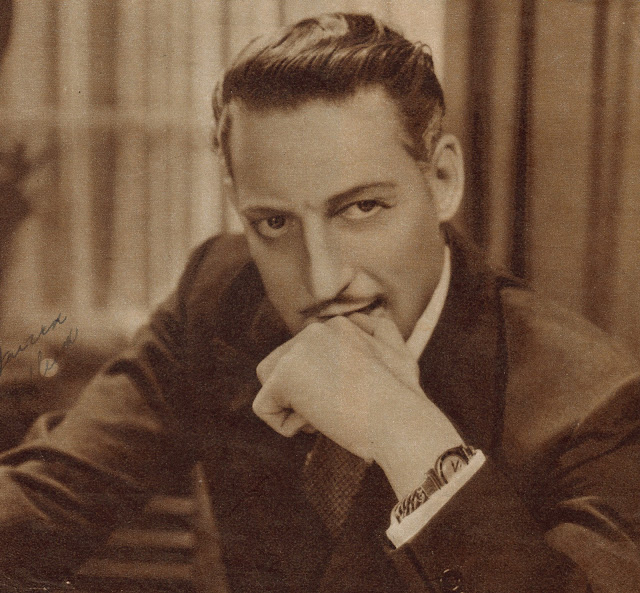 Unlike Miriam Hopkins, Warren William's best blaggard-roles were pre-code. Prior to 1934, William was a rogue, a scoundrel, and an unscrupulous wolf. After the imposition of the code, he lost most of his mojo and became an  honest and, ultimately less interesting, fellow.
An imposing presence who resembled John Barrymore's slightly sinister brother, Warren William sometimes was called upon to play the good guy, but he was oh-so-much more fun as the embodiment of depression-era urban corruption. William's pre-code career is filled with nasty blaggards. Two of his best were The Mouthpiece and Employees Entrance.
The Mouthpiece (1932)
As corrupt city-slicker attorney Vince Day, William is in full blaggard bloom beating the system, living it up, making the innocent pay while the guilty go free. While cheating an equally dishonest man, William's Day is told "You're an unmitigated scoundrel," to which he replies, "Thank you, but I find it much nicer than being just an ordinary one."
As the successful mouthpiece for underworld criminals, Day lives it up with booze and broads. 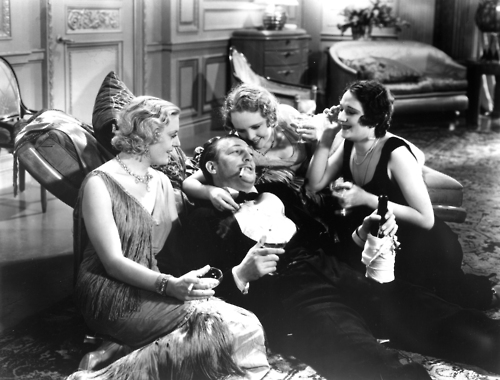 Alas, the nice girl he is trying his best to seduce rejects him. Why do these scoundrels always fall for the virtuous girls? The story has him going straight (eventually), but he really was much more fun before being stupidly stung by Cupid's arrow.
Employees' Entrance (1933)
William at his blaggard best! As the soulless Kurt Anderson, he is the department store magnate from hell, a shameless seducer of women, abuser of employees and all-around creep. This film is pre-code at its most bitter and cynical. Poor little Loretta Young, down and out in the Great Depression, sleeps with Anderson to get and keep her job. Alice White frankly acknowledges her employment position as one of the horizontal nature - being the company on-call girl for entertainment purposes only. They are a sleazy, breezy bunch, and William is the king of the urban jungle.
After the enforcement of the Production Code, William kept busy, but he was never again quite as thrilling as he was in the heyday of the nasty man. For more information about the wonderful Warren William check out www.warrenwilliam.com.


Coming in March: Gail Patrick and Clifton Webb
Posted by FlickChick at 7:47 PM

wonderful blog! I really love it! Especially now, after I've seen the artist I became a little more interested in the early films and your blog is literally a chamber of secrets for them! Great discovery!

Hello, Amelie - I am so glad you found me here in the dark! I am so thrilled that you liked The Artist - I hope it opens a new-old world for many film lovers!

Another great Warren William blaggard role is "Skyscraper Souls" (1932 with Maureen O'Sullivan). I absolutely love it for all the Art Deco sets! And again, it's one where the bad guy falls for the virtuous ingenue and tries to reform.

Great to see someone who loves these movies and actors as much as I do! :)

Elizabeth - yes - that film fits right in there with William's nasty man persona! We was a very interesting actor - and appears to have been a very nice man in real life.

I like this series so much. I can't stand Miriam Hopkins, but she played bitchy well. And, you're right about Warren William being much more interesting pre-Code.

Thank you, Kim! It's true - the baddies are just so much more fun! Best to give into this in reel life and not real life, though!

I loved this blog. I love the pictures of Miriam and of Warren. I loved Miriam because she was so "bitchy"....

Aww, she was a bitch, but she had her reasons!

Thanks so much for the link to my Warren William site. It's always great to see him get covered like this! You picked two of my favorites of his pre-code work to focus on. So glad you managed to see The Mouthpiece, it hasn't aired on TCM in a long time and isn't in print anywhere, but as Warren's breakout role it deserves more viewers. Thanks again!

PS: Count me amongst the love Miriam Hopkins crowd.

Cliff - your site is wonderful. I saw "The Mouthpiece" ages ago and never forgot how sleazy WW was in that!

Oh yes, both Miriam & Warren were much more interesting in full-blown nasty mode than striving for sainthood. You make a brilliant analysis of 'Employees' Entrance' and both William's cynically manipulative character and how both Young and White must accommodate themselves to the male urge (and I like that the ending doesn't soften William's character); it's one of the most acidic of the pre-Code films. I rather like Miriam in what you call her 'minx' stage (to which I would add her Ivy from the 1932 'Dr Jekyll & Mr Hyde'), but she's certainly fun with her claws out later on.

Thank you, Grand Old Movies. Employees Entrance really is an amazingly cynical film - kind of makes you want to take a shower after seeing it.

I love Miriam Hopkins in the film, The Mating Season, she gave such a comic performance as Gene Tierney's character's mother.

Dawn - Miriam did some nice sympathetic roles as she got older (I am thinking of "The Heiress," too), but as a young woman she could biatch with the best! I would have loved to been a fly on the wall when she and Bette Davis were working together!

Unlike Mary Astor, your choice for January and an actress I adore, I admit my sentiments toward Miriam Hopkins fall into the “can’t stand her” variety. Miriam Hopkins was such a strange dichotomy, she was as cute as she could be and had a sassy personality to match. I don’t know just what it is about her that annoys me so, but I can’t imagine any of her roles being taken on by another actress. I’ll admit it is rather impressive her characters could make Bette Davis, the grand dame of bitchiness, frequently seem bland and cowering by comparison. Regarding Warren William, I couldn’t do better than quote you, “An imposing presence who resembled John Barrymore's slightly sinister brother”. A great observation as both actors had an element of dashing elegance and eerie deviltry about him. Warren William is always fun to watch, whether he was the opaque lech in “Under Eighteen” (1932) or the self-righteous prig in “Gold Diggersof 1933”, and all of this done with that voice of honeyed velvet.

@ Gypsy - Miriam Hopkins was extremely lucky that Lubitsch was so fond of her and gave her some very excellent roles to solidify her reputation. I find her interesting - but cold. Warren William is extremely interesting to me - and he was so much better being mean than stuffy & pompous!

I'm not always sure I love Miriam, although she's almost always good. I do enjoy watching those pre-code Warren Williams. He's dependable. (Especially in a sleazy role.)