Marlene Dietrich - In Her Own Words

A review of the new book "Marlene" by Charlotte Chandler.
I approached "Marlene" by Charlotte Chandler with lots of preconceived notions about Marlene Dietrich. The positives: gorgeous, glamorous, tremendous star, great cook, good mother and war hero. The negatives: remote, superficial and maybe a tad self-involved. I had read her daughter's book, and was glad to learn she was a loving mother (as well as read about all of the juicy intimate details that were included), but I still wasn't 100% swayed into Marlene's camp.

"Marlene" reveals the legendary star as an older woman looking back on a fabulous life. Chandler had the opportunity to interview Marlene in her Paris apartment in the 1970s. She is mostly adorable: warm, funny, a little outrageous and as honest as she feels like being (which sometimes is not very honest at all). She understood her product, protected it, respected it and lived a life of glamor and depth. In her Paris apartment that she rarely left, she holds court and talks abut her favorite subject: Marlene Dietrich. And why not? No false modesty here. She was as delightfully enthralled by this glamorous creation as the rest of the world.


Chandler fills in the gaps with some biographic facts to keep the continuity going, but the book is largely Marlene in her own words, supported by reminisces by the many luminaries who adored her (and some who clearly did not). Some of Chandler's choice subjects include:
Leatrice Gilbert Fountain: The daughter of silent film idol John Gilbert, she paints a loving tribute to Marlene was a woman who not only brought happiness to her father's last days, but also treated his child with great kindness.
Bette Davis: Bette's great recollection of Marlene is of the time they spent working the Hollywood Canteen, a haven for servicemen during WWII and a place where they could get up close and personal with film stars. Bette's recollections of Marlene's cooking and willingness to get down on her hands and knees (always with a hairnet) to scrub floors are priceless.
Douglas Fairbanks, Jr.: Fantastic stories told by Doug, who was her lover for five years. Always a gentleman, he has many funny, sentimental and touching stories, all told first-hand to the author. His interviews are a real treasure.
Fritz Lang: Marlene's fellow German director of "Rancho Notorious" and not a fan.
Burt Bacharach: Fun tales from "On the Road With Marlene."

Some familiar territory is covered, such as her "unique" open marriage, her artistic relationship with Von Sternberg and the hand he had in the initial creation of the Dietrich image from "The Blue Angel" to their spectacular Hollywood collaborations, and the many love affairs with famous people (Jean Gabin, James Stewart, John Wayne to name a very few).


The book moves along at a good clip, letting Marlene tell the bulk of her story. She is most endearing when speaking about her happy childhood in Berlin (her mother's family ran an elegant jewelry store, so love of gems was in her blood), her love for her daughter, and her war effort.
Behind this glamorous creation, there was a very real woman. In her heyday, she never tried to hide this. Marlene was always upfront about having a child at a time when sexy movie stars were not supposed to be mothers. She sacrificed her 36 pieces of Hermes and Louis Vuitton luggage (but not the endless sets of dime-store fingernails) to pack light and entertain her beloved "boys" in uniform.


Much of Marlene's power and strength seems to have come from a childlike self confidence. She really seemed to believe she could do anything. The half-baked plot to kill Hitler while she is naked, related by Fairbanks, is a highlight. But when it came to the Nazis, her sympathies were in the right place. Her extraordinary effort on behalf of the Allied servicemen is well known, but, in her own words, she lets you know how near and dear it was to her heart and just how much it cost her to be reviled by her own countrymen as a traitor.


Because her image was so concentrated on an other worldly beauty and glamor, the aging process was especially difficult for Marlene. When movie offers no longer came, she carved out a second career as a highly successful nightclub chanteuse. Here the illusion was easier to maintain and no close-ups were required.
A real highlight of the book was the extensive interview with screenwriter Joshua Sinclair , who worked closely with Marlene on her last film appearance in 1978's "Just a Gigolo." This story is worth the price of the book. Told with great affection and admiration, Dietrich's swan song is documented with humor, pathos and respect.


Marlene was by no means a walk in the park. Her back-handed, passive-aggressive comments about her husband's lifelong mistress are eyebrow raising to say the least. She was the uber-female and embodied all of the maddening qualities that go with that.


Ultimately, I ended up feeling a little sad for Marlene Dietrich. Although an intelligent woman who made a tremendous amount of money, she wound up without the means to maintain her lifestyle in her old age. To her credit, she was incredibly generous to her friends and family. And, I must admit, her devotion to extravagance and quality simply because it was what she wanted, endears her to me. Mary Pickford once said "I think Oscar Wilde wrote a poem about a robin who loved a white rose. He loved it so much that he pierced his breast and let his heart's blood turn the white rose red. Maybe this sounds very sentimental, but for anybody who has loved a career as much as I've loved mine, there can be no short cuts."  It seems Marlene loved the Dietrich image and product too much, so much so that it cost her an engagement in life in her last years. But, she wasn't complaining. For her, the success, the luxury, the love affairs and the excitement had all been worth it. What was not worth it to her was to appear on the streets of Paris as an old woman no longer beautiful and have that photo splashed across the newspapers for all to remember. She wanted to be remembered as the movie star Marlene Dietrich, a goal she achieved. 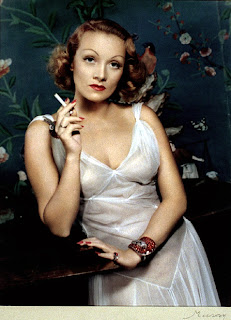 I think I'll go watch a double feature of "Shanghai Express" and "Destry Rides Again" to enjoy the Marlene Dietrich its creator wanted us all to enjoy, admire, adore and applaud.


"Marlene" is available at on-line and real bookstores. I found it to be entertaining, well written, and had just enough new material to shed a new light on a very well documented, but endlessly fascinating, subject.

Great review. Makes me want to read the book. There was a documentary about her on tv. They had an audio clip of her talking with her mother after not being able to communicate with her during the war. Her mother lived in Germany. I was so touched by Marlene's vulnerable, sweet voice saying "Mummy"..or "Mommy".. when she first greeted her mother after not speaking with her during the war.It was the voice of a little girl.

Thank you, Mary. Although she was a very powerful presence, there was something quite vulnerable about her (part of the secret to her charm!).

This is a great review! I really want to go out and buy this book now. I never have known much about Marlene but have always been interested in learning more.

As an interesting side note about her WW2 work, my grandfather saw her perform and she was playing a string base between her knees or something like that lol.

JN- Marlene was actually playing a saw for the troops! She was quite versatile, wasn't she?

I love Marlene and your review of the book makes me want to go out and buy it.
Great review. I loved it.

Thank you, Diane. She is a fascinating subject.

Flick Chick? Can you contact me at starlightreporter@vintageallies.com ? Modernaire Jolene would appreciate it...

Beautifully-done article about the book and the woman. Dietrich was never a favorite of mine, but her beauty and impact on film are undeniable. An affair with Douglas Fairbanks Jr., huh? I could be jealous of that....

I agree, Becky - I was never an enthusiast. Her life, on the other hand - wow!

Dietrich, as most know, was bisexual, with an array of lovers of both genders. According to an earlier biographer of Marlene's, she tried to woo several of her Paramount actress stablemates to her bed, including two who had little interest in lesbianism:
http://carole-and-co.livejournal.com/346936.html

(Incidentally, does the new Dietrich book say anything about her relationship with Lombard?)

Barely a mention of this topic in the book. Since the author filled in the details around the interviews with Marlene - and this wasn't something I guess she wanted to talk about at that point in her life - it was pretty much left out.

I've never heard of Marlene Dietrich's romance with Carole Lombard! Maybe I should finally read the Spoto bio I picked up from the thrift shop. According to the Dietrich bio by her daughter Maria Riva, Dietrich didn't find Lombard terribly attractive. If I recall correctly, Dietrich considered Lombard's looks very American and equine. By the way, FlickChick, you summarized Chandler's bio in a way that highlighted all its most engrossing aspects. Have you read Maria Riva's biography? It'll give you an entirely different perspective of Dietrich. -- Joseph

Thank you, Joseph. Yes - I did read Maria Riva's book and nothing could come close to that. I thought this book was interesting for Marlene's own words (thought with Marlene, you have to make allowances for the liberties she took with the truth).