What More Is There To Say About Cary Grant? 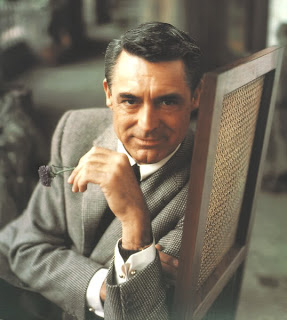 Is there anything left to be said about Cary Grant? As time goes by, he is probably the most popular, most enduring and endearing of all classic Hollywood stars. We love him and have praised him and will continue to praise him to the skies. We never tire of him. He could do it all and I can find no fault.

Well, maybe one: being human, he could not appear in every movie ever made.

What if Cary had been able to appear in some classics that were, of course, diminished by his non-participation? Here are a few that, personally, I think would have been immensely improved by his presence.


1. GONE WITH THE WIND
Leslie Howard as Ashley Wilkes just never did it for me. How could Scarlett possible prefer him to Clark Gable? Now, no one could possibly replace Mr. Gable as Rhett Butler, but if Scarlett had to choose between him and Cary, that would have presented Miss O'Hara will an almost impossible dilemma! Since Howard was allowed to maintain his British accent, Cary would have been just as plausible. Imagine the scene in the orchard when Scarlett and Ashley throw caution to the wind and share a passionate kiss? Or the scene when Scarlett kisses Ashely before he goes off to war (while poor wife Melanie is upstairs, taken to her bed)? Or the scene of Scarlett's scandalous abandon when she reveals her love to Ashley in the library at Twelve Oaks?  If only.....

2. LOVE IN THE AFTERNOON


Gary Cooper just seemed too old for such a young Audrey Hepburn. He was only a few years older than Cary, but seemed much older at that point and much more world-weary. We know that Cary and Audrey had great chemistry (demonstrated six years later in "Charade") and Audrey being swept away by a six-years younger Cary would not only seem perfectly understandable, but wouldn't have that faint whiff of something-not-quite-right-here about it. The delicacy required in the scene where she hides in his apartment would have been cake for Cary; the scene in which he pulls her into the train fraught with more romance. And I do believe that future father-in-law Maurice Chevalier would have been much more pleased. How unfortunate that Billy Wilder and Mr. Grant never hooked up.

3. MILDRED PIERCE
Cary could be sinister, too, and superficial. What fun it would have been to see him ping-pong back and forth between Joan Crawford and Ann Blyth in "Mildred Pierce." Oh, Zachary Scott was alright, but in the person of Cary Grant we could believe these 2 women doing almost anything to get him and keep him.
Joan and Cary would have been quite an interesting star cocktail, especially in this movie. Joan was at her best and Cary would have to have been at his most charming and caddish to keep pace.

4. WITNESS FOR THE PROSECUTION
Tyrone Power is very good in this film. He plays against type, but I can see him acting. Cary Grant could have aced this oily conman who had a way with the ladies and made it seem like second skin. Power was fine, but not quite sincere. Cary would have you believing in his innocence (even though you knew he was guilty). He would have been more than a match for Marlene Dietrich at her duplicitous best, and the scenes between Cary and Charles Laughton make for delicious contemplation. Billy Wilder: why did you never call Cary?

5. SABRINA
Another case of a too-old, rather joyless man for the sparkling Audrey. While Bill Holden was perfectly believable as a crush, it was a little (OK -VERY) hard to swallow Humphrey Bogart as her ultimate love interest. Bogey looked old and acted old. I know the character was supposed to be stodgy, but think how much fun an older version of Cary's "Bringing Up Baby" professor would have been here. He would have really given Bill a run for his money and Audrey's eventual swan dive into love would have seemed inevitable. Their dance to Isn't it Romantic? would have been a classic. Another case of Billy Wilder needing Cary Grant.

I have a hard time coming up with any great role that Cary Grant could not have played. Hamlet? Abraham Lincoln? The Wizard of Oz? I believe in Cary Grant! He might not seem right at first, but I am sure he would have found a way to make it his own. Well, a girl can dream, can't she? And who better to dream about than Cary Grant, who, night after night, continues to star in countless dreams around the world.

Posted by FlickChick at 6:40 PM

You missed your calling. Casting director would have been a good fit! Great post. Fun to read and imagine.

It's easy to cast brilliantly when you have Cary Grant!

One film I wish Cary Grant had taken part in -- with no offense intended to the man who actually had it, Robert Montgomery -- was in the 1941 "Mr. & Mrs. Smith." We know Cary worked well with Hitchcock (although romantic comedy wasn't Alfred's stock in trade), and the mind reels at the potential comedic chemistry between Cary and Carole Lombard. (Yes, they had teamed for "In Name Only" two years earlier, but shouldn't the king and queen of the screwballs have reigned together in one film?)

I wrote about "Mr. & Mrs. Smith" this week as part of the Hitchcock Blogathon at the Classic Movies Blog Association; you can read the entry at http://community.livejournal.com/carole_and_co/373703.html

Hurray for Archie Leach(Cary Grant's real name)! I especially loved the references to him in one of "Leverage's" episodes. My dad told me about how he had seen Archie Leach perform at St. Louis' Muny Opera before he became Cary Grant. Makes me wish I could've been there.

Your blogs are fantastic. Can't wait to see what you have to say about my heartthrob Errol Flynn!

Most excellent blog! I was thinking about "Love in the Afternoon" not long ago...maybe it was airing on TCM...and thought the same thing, "if only the older man were Cary Grant, I could believe Audrey's interest in him..." I wouldn't have minded Cary in James Stewart's role in "Bell Book and Candle" - again, it's that he was so youthful for his years and Stewart looked too old for Kim Novak. Of course, Cary could easily have been an early James Bond (and I've heard he was offered the role + that "North by Northwest", "To Catch a Thief", "Notorious" all influenced the early Bond films in one way or another). I agree w/VP about "Mr. & Mrs. Smith" - Lombard and Grant were sensational together and would've improved Hitchcock's only screwball comedy immensely.
My favorite of your substitutions was "Gone with the Wind." No one would've questioned Scarlett's dilemma had Cary been in the picture.

I just learned about your blog from Robin ~ The Decorating Tennis Girl. We both love vintage films. I am glad to meet you!!

So glad you found me here and I hope that you enjoy the posts!