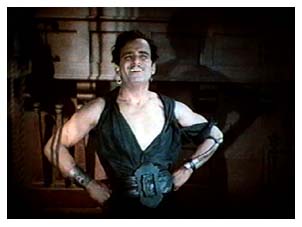 When we consider the word "romance" or "romantic" we usually think of romantic, sexual love. In the silent era, the great  romantic male lovers were Valentino, Gilbert and other smoldering latin lover types. We usually don't think of Douglas Fairbanks, high-spirited, happy-go-lucky adventurer, as a romantic star. However, if we think of romance as:
"a fictitious tale of wonderful and extraordinary events, characterized by a nonrealistic and idealizing use of the imagination," (a definition from a web-based dictionary)
then I make the case for Douglas Fairbanks as the most romantic movie star. Ever. 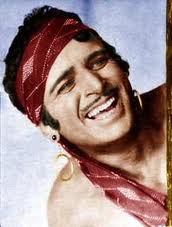 How fortunate for Doug and for filmgoers that his exuberant spirit and the silent film collided. How lucky for silent films, this most personal form of entertainment that speaks directly to the child in us and the child's love of make believe, that they and this joyful man-child found one another at just the right moment.
In Doug's hands, the romance of adventure, high spirits, of heroes and damsels of old, were tales that were lovingly told with an open heart and a sweeping vision that could only have found a voice in silent films. His youthful view of the world and the youth of the medium, combined with the giddy, youth-worshiping twenties, produced films that spoke to the hours curled up with Robin Hood or The Arabian Nights, alone with nothing but a book and an innocent imagination of a world where anything is possible; a world of beauty where good always triumphs,the hero is dashing (always) and the damsel is beautiful and in distress. It is a world of action and possibilities, of chaste kisses, full hearts and happy endings. 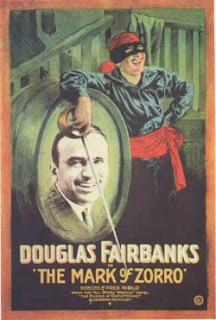 Who better than Doug to sweep us away on a magic carpet ride?
Douglas Fairbanks was a great artist who knew exactly what he was doing. He infused his work with enthusiasm, joy and romance, all with the sole purpose of creating magic and enchantment. He loved the movies. When faced with the dreary, mechanical vision of a sound stage for talking pictures, Fairbanks tuned to his colleague, Art Director Laurence Irving, and said "Laurence, the romance of motion picture making ends here." Limits, the sad reality that ushers in maturity, had been set. Things would never be the same. 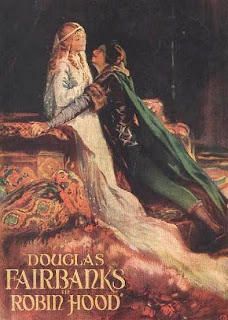 The world moves on, we age and the little child in us moves ever farther away. Even Doug grew older and lost Mary, Pickfair and stardom. Nevertheless, he, and the great silents, gave us a portal to that eternal child. What a relief to find a way back to romance and innocence through Doug's pure artistry, athleticism, vision and joy. For those of us that think this is what the movies are all about, there is no greater star than Douglas Fairbanks.
Posted by FlickChick at 6:59 PM

Hi FlicChick,
I recently saw the Mark of Zorro on TCM and liked it so much, it inspired me to use clips to put together a promo video for my Improv troupe. Folks can check it out here and let me know what you think:

Very good about Doug, thanks

Glad they have a collection of DVDs of his work. Don't get to see him too much on TCM.

Great piece on Letitia Fairbanks' uncle Doug - thanks ever so much for posting! I found you by following Movies, Silently and Gwen Kramer's Leiber award. Congratulations, a well-earned prize!

As you are clearly a Douglas Fairbanks fan, you might be curious to check out his niece's 1941 fairy tale that we (the family) have just published now in 2013. Letitia (my stepmother) began work on Princess April Morning-Glory on Dec. 11, 1939, her 26th birthday and the night her uncle Doug died. She wanted to produce a piece of art mixed with literature that would honor the exuberant spirit that had been Douglas Fairbanks. We think she succeeded in spades.

Thanks for your lovely piece on uncle Doug - Letitia would have loved the internet, and your piece, too!