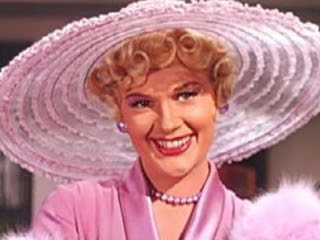 This is my entry in The Classic Movie Muse's Singin' in the Rain Blogathon. Click here for more of that glorious feeling.
Yes, loyal fans, we are still here. No matter how hard her enemies try to destroy her legacy, Lina Lamont's fans will not rest until the truth is known and Lina is awarded her proper place in the history of film.
Just as John Gilbert's legacy was harmed by those who sought to destroy him, Lina's reputation has suffered. For those not familiar with Mr. Gilbert, he was a huge star whose career was destroyed when his enemies made his perfectly adequate voice seem inadequate when talkies changed movies forever. Once the great lover of Greta Garbo, Gilbert made powerful enemies and - poof! -  bad sound, bad scripts, good-bye. Garbo, on the other hand, had scripts tailor-made to her vocal abilities and the best directors, sets, co-stars and costumes. Funny how that happened.
Lina's story is not unlike that of John Gilbert. From 1923 - 1929, Lina Lamont was Monumental Pictures biggest and brightest star. Women copied her and men longer for her. She especially excelled in historical romances and, once paired with Don Lockwood, was one half of a screen duo that rivaled the aforementioned Garbo and Gilbert. During the height of her popularity, Lina received more fan mail than Swanson and graced the covers of more magazines than Bow and Brooks - put together!
Naturally, Lina was Monumental's highest paid star. When talking pictures took over, the "masterminds" (as Norma Desmond called them) saw a way to force Lina to take a giant cut in pay. They did virtually nothing to prepare her for talking pictures, giving her only a few lessons with a half-baked vocal coach. MGM not only gave Garbo time to get up to sound speed, but also waited until they found just the right screenplay for her talkie debut ("Anna Christie"). Poor Lina was forced to transition at the snap of a finger from the silent "The Dueling Cavalier" to "The Dancing Cavalier," which showcased the much lower-paid Lockwood's strengths and set the stage for Kathy Selden, the chippie who was sleeping with the star, to claw her way to the top on Lina's back.
Lina was also falsely accused of being a "dumb blonde." Lina was a high school graduate with straight "B"s. Her business savvy was legendary. In fact, Mary Pickford was known to admire Lina's negotiating tactics.  But besides being Monumental's highest paid and most glamorous star, Lina also had a keen, inventive mind. Not many people know this, but Lina Lamont was the real inventor of the internet.
Others stole the credit, but those who know Lina's keen interest in electronics and gossip know that she was in the forefront of merging technology with up to the minute information. Even today, the 512 x 512 pixel standard test image is known as a "Lena." Coincidence? We think not.

Fans of fashion know Lina as one of the best dressed stars in Hollywood. Whether it be in a period romance, as in this sumptuous costume from "The Royal Rascal,"

or this chic and modern monkey-fur trimmed jacked, Lina knew how to accessorize and always looked better than any star in the room. 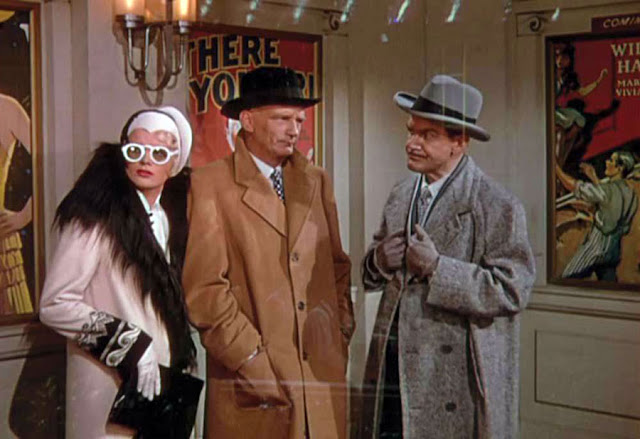 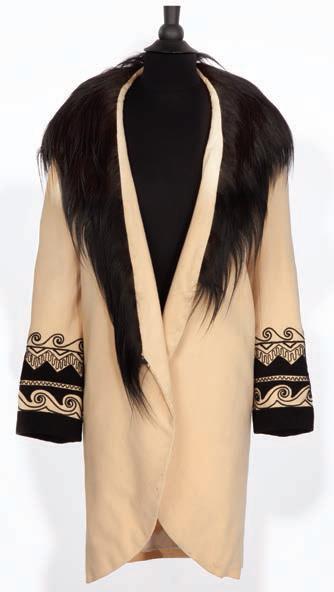 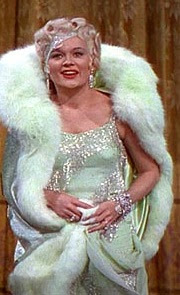 So, here's to you, Lina Lamont. Your fans still love you and will never rest until you have been recognized as the ultimate shimmering, glowing star in the cinema firmament.
They have rediscovered Louise Brooks. Now it's time for a Lina Lamont revival!
Posted by FlickChick at 12:01 PM

Email ThisBlogThis!Share to TwitterShare to FacebookShare to Pinterest
Labels: Lina Lamont, Singin' in the Rain

What a superb tribute to this long gone but not forgotten star. Lina Lamont forever!

Ah, now you've got me dreaming about those fan magazines with Lina Lamont covers...Thank you so much for bringing our girl to the blogathon through your fabulous post, Flickchick. It wouldn't have been a proper blogathon without this shimmering, glowing star making her appearance!

Thank you for the kind words, Movie Muse, and for hosting this blogathon. The contributing bloggers are doing this great film proud.

It's kind of funny seeing Lina's French Revolution dress without the giant foundation garments--it looks totally different. And the parallel you drew between Lina and John Gilbert was a really interesting point. Almost makes me want a "Singin'" sequel to see where she ended up. Almost. :-)

Some haters say Lina was dumb or something, but you proved them wrong with this tribute! Bravo!

I simply knew you were going to write about Lina, being Lina Lamont's biggest fan and the president of the Lina Lamont Fan Club. Lina Forever!
Cheers!

This is completely awesome!!! I love it. Especially tossing in things like Lina invented the internet :-) Clever post!

BTW, I tagged you here with the "Running Wild in Impractical Outfits" tag. Play if you want to!