High Noon: The Cowards Among us

So, this is what happened the other day.

For some strange reason, the theme song from "High Noon," the 1952 western, invaded my brain. Now, you should know that I am not a western fan by any stretch and this song is never one that is on my playlist. Still, it persisted, first in the shower and later over coffee.
Now, normally I would push it out as best I could and go on about my day. But this time I decided to listen. Maybe the universe was telling me to watch that movie. And so I did. And so I was  - what - blown away? Impressed? Kind of shattered and overwhelmed with the love of the power of film.
Like I say - I'm not a big western fan, but "High Noon" is a morality parable disguised as a western. I think I know that is the case with many westerns, but I really don't like to see horses fall down, so....
Anyway, back to "High Noon." Somewhere in the recesses of my movie brain, I knew this story was a commentary on the 1950s blacklisting of writers with supposed communist ties.
And, truth be told, I am not a big fan of the older Gary Cooper. The ick factor of "Love in the Afternoon" still lingers for me. But it is his weariness that comes with age that makes him so perfect for the role of Will Kane. I read that John Wayne was the original choice for the role and that he turned it down because he disagreed with the overt politics of the story. Thank goodness he did. I doubt Wayne would have conveyed the honest desire to retire and ride off to open a store with his new bride (although what man wouldn't be tempted to run off with Grace Kelly?). And just in case you're feeling none to kindly (western influence seeping in here) towards the Duke, he was mighty gracious in accepting Cooper's Oscar for the role.
Beautifully and simply filmed with nail biting suspense as the clock ticks towards high noon and Kane's moment of truth, the question looms - who will stick their neck out for what is right? Who will risk everything for the truth? Who will stand with those who have stood for us? 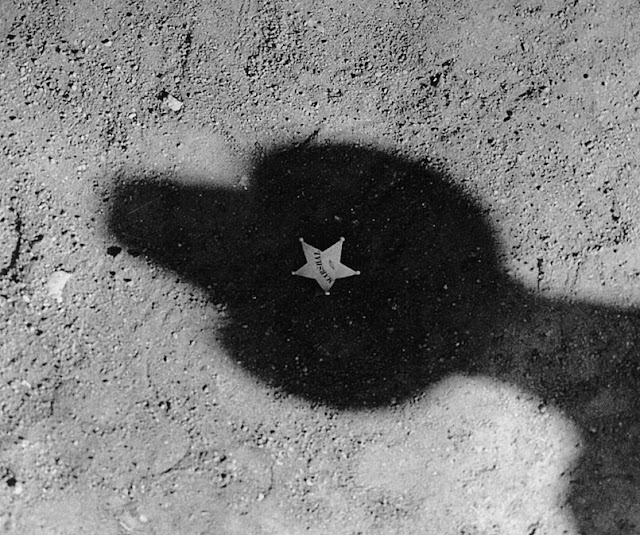 What would you do? May we never stop asking the hard questions.

I doubt I'll be facing down any gangs of desperados in the near future, but I do think we get daily opportunities to be heroic and take a stance, to risk ourselves a bit for the sake of each other and what's right.

I sure hope you won't! I just hope if I do I'm more Will Kane and less like those craven townsfolk.

I am a major western fan, but I never think to put High Noon on my favourites list. That is not because I don't revere the film, but that I don't think of it first as a western. It stands alone, like Will Kane, in its own category of a movie that draws you into its world and makes you think about your own.

Thanks, CW - which is probably why I like it. But, aren't most good westerns morality tales in some forms? Or maybe just the ones I like,,,,,

Great, now I'll have the song in my head for a day or two - and I'll have to fight the urge to rewatch High Noon!
Jokes aside, your post is great. A lot has been written about this film, but it's always great to reinforce its importance and how it stands up the test of time.
Kisses!

Wayne was indeed very gracious about accepting the Oscar for Cooper. Thanks for sharing that clip.

As much as I like John Wayne's acting abilities, I agree Cooper was the better choice. His character added to the tension, and at times you wondered if he might just Pack It In after all. I don't think Wayne would have been that subtle.

But as for Cooper and the Ick Factor of Love in the Afternoon, I completely agree!

HI Ruth - yes - Wayne could never have imbued the part with such inner conflict. He would have been itching to shoot it out - Grace Kelly or no Grace Kelly.