This is my entry in the Pre-Code Blogathon, hosted by Pre-Code.Com and Shadows and Satin. Check both sites for more audacious entries! 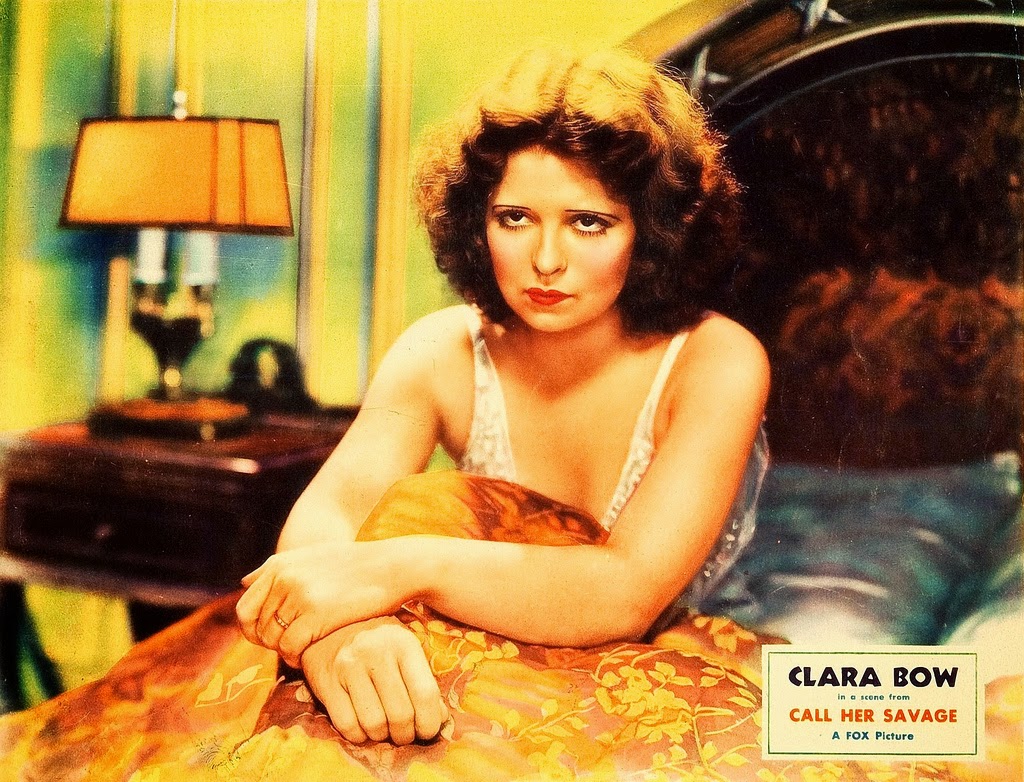 I used to get a real kick out of this film. It is loaded with pre-code antics up the yin-yang. But now, I can't help but view with a little sadness, too. 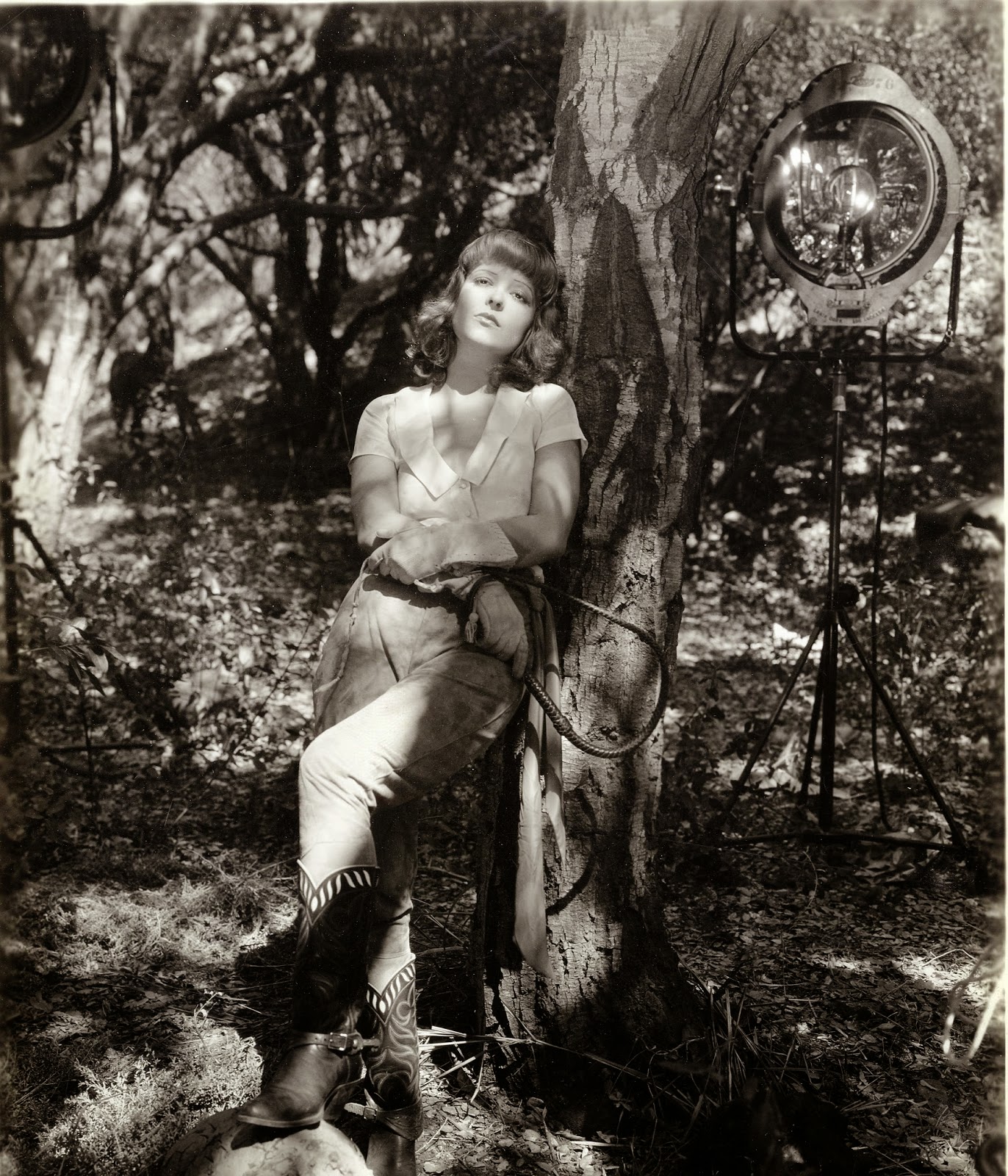 Don't get me wrong. "Call Her Savage" (1932) is what enforcement of the code was all about. Bestiality (implied), prostitution (almost), a dead baby, a cat fight, a gay cafe scene, lingerie and an alarming lack of said lingerie: it's all there. For those not familiar with the film, here' the story in a nutshell: 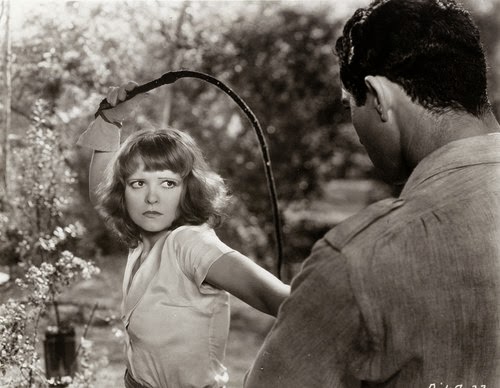 Nasa Springer (Clara Bow) is an uncontrollable wild child. we know this because she whips a snake and a (pardon the expression, but it is much in evidence here) half-breed named Moonglow (Gilbert Roland). Nasa also leaves her house without her foundation garments, frolics herself into a kind of sexual frenzy with her Great Dane and, worst of all, her papa frowns at the sight of her.

In fact, scowling pops and the beau he had planned for her are such a drag that the spirited Nasa beats it out of Texas and makes for the bright lights of Chicago. There she marries a beast of a husband, has a baby, loses the baby in a fire and almost succumbs to the streets. She fights back from the depths and manages to give ex-husband Larry Crosby (Monroe Owsley) and rival Sunny De Lane (Thelma Todd) a chair over the head and a good hair pull, respectively. 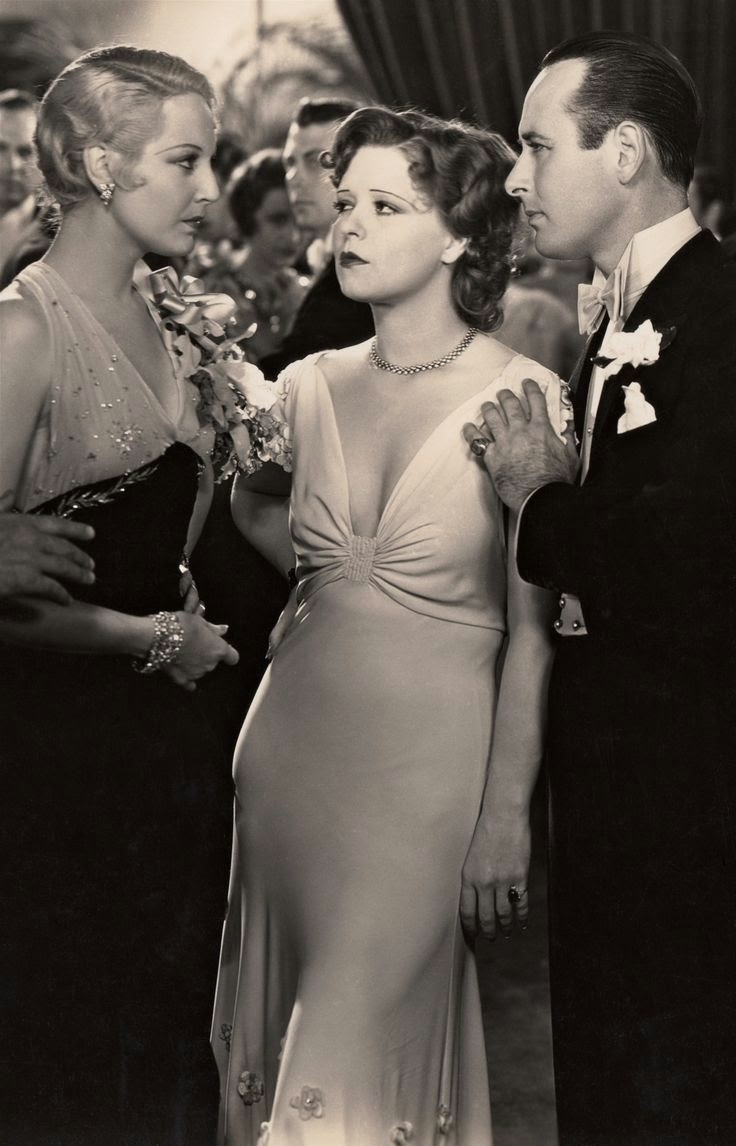 When Nasa learns that her mother is ill, she returns home to Texas. Now, be mindful that early on in the film mom seemed to have had a cozy relationship with a Native American. On her deathbed she confesses all to Nasa: the source of her wildness, her savagery is the half of her that is not (gasp!) white. Yes, mother dallied with an American Indian (old scowly-face isn't her father after all!) and Nasa is a half-breed. That explains it all! And to put the cherry on top of the cake, Nasa can now live happily ever after with Moonglow because now the races are not mixing. Yay!

This is all pretty heady pre-code shenanigans. What makes it sad for me, and what I missed earlier, is the cruel exploitation of the brilliant Clara Bow. A great silent star whose  mental and emotional states were fragile, Clara was the victim of scandal and scurrilous rumor, innuendo and outright lies. The opening scenes are shocking, outrageous and a crass exploitation of Clara's past and reputation (rumors of sex with her dogs was one of the most cruel things said of her). It was a comfort to her to have former lover and loyal friend Gilbert Roland as a co-star. Roland remained a supportive and gentle pal to Clara for the rest of her life. 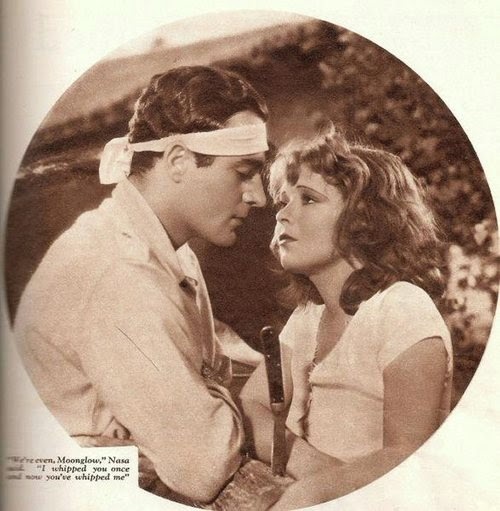 The film never really gets out of the gutter (which is one of its chief pleasures), but, in spite of this, Clara rises to the occasion and proves herself to be a fine actress. Her performance is saucy, sexy, strong and touching. Her voice is good and she is always in control of the many emotions she portrays. Monroe Owsley also turns in an interesting performance. He was an interesting actor who died much too soon.

I suppose this film can be viewed as one that strikes a blow for women's independence, since Nasa defies her father and the arranged life planned for her to strike out on her own and follow her heart, but in telling this story, the film exploits the life of the woman on the screen. Clara Bow was 27 when "Call Her Savage" was released. She made one more film and then retires. She had had enough. 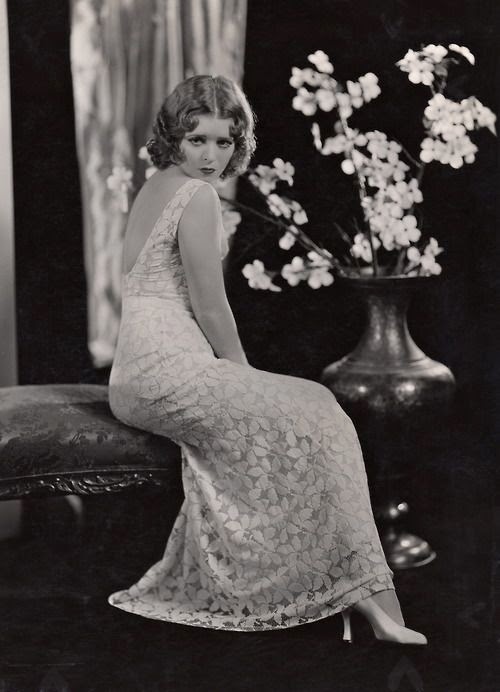 "Call Her Savage" is a pre-code extravaganza that is no better than it should be, but it hurts my heart a little to watch it. 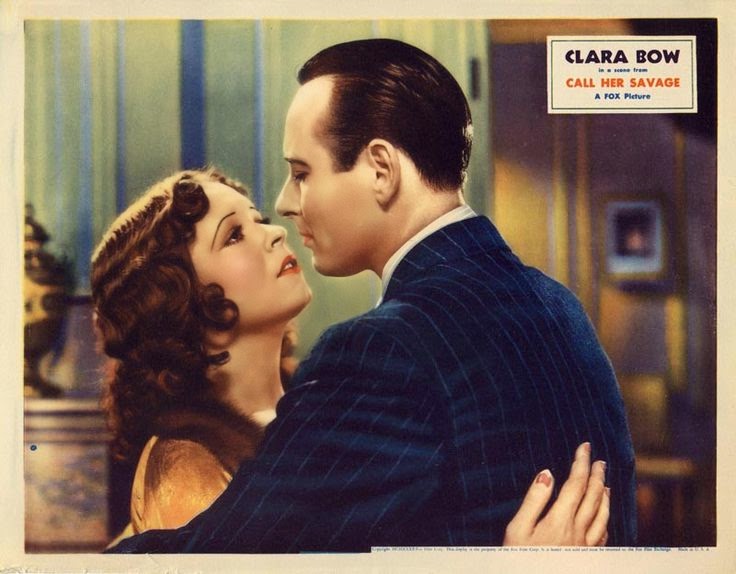 Posted by FlickChick at 9:03 PM

I greatly enjoyed your post, Chick -- I haven't seen this film in years, but I want to dust it off now and check it out again. I appreciate you sensitivity about Clara Bow, who really did seem to get a raw deal in many ways. BTW, I had no idea that Monroe Owsley died so young! Thanks for this ideal pick and great contribution to the blogathon!

Thank you, Inge. Poor Clara- she was always so happy on screen and so unhappy off screen.

Karen - thank you for hosting this totally awesome event. It will take me 2 weeks to get around to all of the posts.

Great post! I find Bow's films hard to watch as her off-screen sadness always seeps into her roles. That's not to suggest she's not a competent actress - she is! - but some of the tragedy always seems to be in her eyes. Or maybe that's just me!
But I do agree that this is one of the most challenging pre-codes. It ticks every box you can think of!

This film would be a bit sad, for all the reasons you mentioned. This was a beautifully-written and touching tribute.

Hi Ruth - it is jam packed with pre-code doings, but I agree with the previous comment - there is, in her talkies, an air of sadness about her.

Very interesting! I must admit, I never saw a Clara Bow's film. Maybe I should start with this one!

Phyl - isn't that dress lovely? I chose it because she looks so elegant and so non-Nasa Springer in it.

Wonderful World - Clara was a great star. Her silents really showcase her star power - "Mantrap" is my favorite.

Wonderful review! This is another Clara Bow film I've got to watch, and I'll pay attention to what you said. I feel bad for how Clara was treated in Hollywood, poor, fragile girl.
P.S.: I hope you had a wonderful time at TCMFF!
Kisses!

Thank you, Le. Yes - I had a wonderful time in LA - and yes, Clara was a fragile girl so ill used.

Hey, Marsha! I was talking about my new book, a dark historical novel. Seen I hope to start writing adn publishing in English through Amazon Kindle ;)

Marsha -- Thanks for your take on this over-the-top movie. Bow only made one more movie after this, the dull Hoop-La, but it ends with Bow in one of her most luminous moments, a look of freedom and joy on her face. Bow left film on her own terms, and there's something admirable about that.