Welcome to 2013 - a year of scandals at A Person in the Dark. Yes, I love movies, but I confess I am a sucker for those juicy Hollywood scandals of old.

May's scandal: Mabel Normand and Edna Purviance party down!
Poor Mabel Normand! Trouble seemed to just follow the high spirited and beautiful comedic actress wherever she went. First, her engagement with erstwhile suitor Mack Sennet was busted up, literally, when Mabel caught Mack in a compromising position with actress Mae Busch, who conked Mabel over the head with a vase and put the poor dear in the hospital. She then engaged in an affair with Samuel Goldwyn that may or may not have produced a stillborn child. Next, she had the very bad luck to be the last person (except the killer) to see doomed director William Desmond Taylor alive (Click here for more about the 1922 Taylor murder). Although Mabel was never a real suspect, tales of drug abuse surfaced and her reputation was badly tarnished.

Mabel had managed to make a comeback in 1923 (working with Sennet again) with 2 popular films – “Suzanna” and “The Extra Girl” – but on New Year’s Day 1924 trouble again found Mabel.


Edna Purviance is chiefly known as Charlie Chaplin’s leading lady from 1915-1923. Not only was she his love interest on the screen, for some time she served as his love interest off the screen. Charlie being Charlie, Edna was eventually replaced by a younger model. But, Edna didn’t let any grass grow under her pretty feet.

Courland Dines was a socialite and business man who was sweet on Edna and even sweeter on booze. After a second divorce in 1923, Dines went west to to seek a fortune in oil.  There he met Edna and her pal, Mabel, and a happy little threesome was formed. Courtland’s parents were not so pleased that he was dating an actress, but he and Edna and Mabel were just having a swell time together.
New Year's Day found Edna and Mabel at Dines' apartment. Around 7 p.m. Mabel's chauffeur, Horace Greer, showed up at the apartment, later stating that he had been called to pick up Mabel and take her home. For reasons that were never clear, Greer thought that Mabel was being held in the apartment against her will. Pretending to be a deliveryman. Gaining entry to Dines' apartment, Greer found Mabel on the couch, Dines sitting at a table and Edna in the bedroom (allegedly powdering her nose). According to Greer, when Mabel reluctantly agreed to leave with her driver, Dines tried to prevent them from leaving by threatening to hit Greer with a liquor bottle. Greer's reaction to this was to shoot Dines three times. With Mabel's gun. Ouch.
Throwing her powder puff aside, Edna rushed to the living room to find Dines shot and without a bottle in his hand. Instead of calling an ambulance, the 2 ladies and Greer got Dines into bed and tried to provide some first aid. This, apparently, didn't go too well, and, Greer decided to leave the patient and drive to the nearest police station, where he turned himself in. This prompted both the police and the medics to descend upon Dines' abode, where the wounded one was found bleeding and smoking a cigarette. The press described both Mabel and Edna as elegantly dressed and "excited" (which was a code word for one gimlet too many). 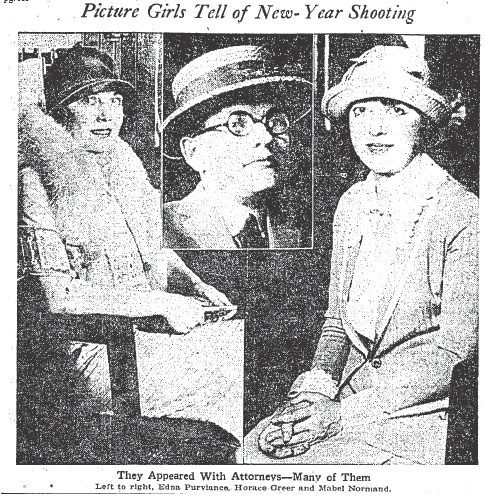 It was never really clear why Greer shot Dines. It was speculated that he had a secret crush on his employer, but Mabel denied it. Courtland Dines pulled through just fine and declined to appear in court at Greer's trial (claiming he was too drunk that night to remember what happened). While Greer refused to testify in his own behalf (for fear of harming Mabel), both she and Edna were painted as examples of Hollywood's worst behavior. The scene at the apartment was described as a debauched and drunken affair with - gasp - Dines only in an undershirt. Greer was acquitted (but arrested 2 hours later for possession of liquor).

After the Fatty Arbuckle and William Desmond Taylor scandals, the public saw this as yet another example of Hollywood's wanton ways. Mable's films suffered at the box office and Edna's film, Chaplin's "A Woman of Paris," also suffered because of the scandal.

Trouble always seemed to find Mabel, who succumbed to tuberculosis in 1930. Edna retired from film and, while she didn't marry Courtland Dines, she did have a later happy marriage to airline pilot and executive, Jack Squires. Courtland Dines went on to marry a total of four times before dying at age 55 in Denver. 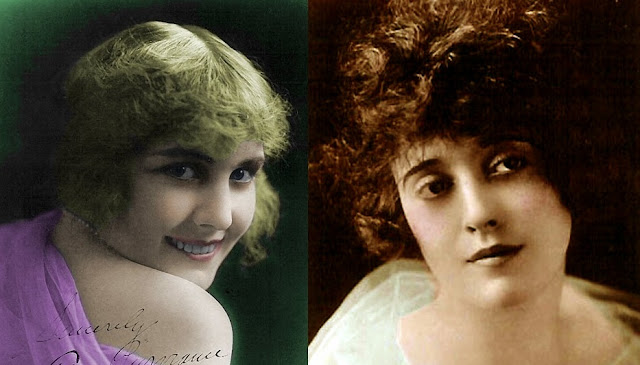 For a loving tribute to these fun loving ladies, see 1987's "Good Morning, Babylon," and Italian film about brothers who come to Hollywood to work on D.W. Griffith's massive sets for "Intolerance." There they meet and fall for two beautiful and struggling actresses named Edna and Mabel.

Sounds like their lives were way out of control.

They were just 2 high spirited girls high on spirits!

Hey there! I nominated you for the Liebster Award!
http://moviessilently.com/2013/06/04/the-liebster-award/

Gorgeous post! I love the idea of exploring these old stories

My first post on your blog and really it is just to say thanks for your Nice Post And Shairing
You always pick such interesting i visit your blog regularly for updates!
Loved your description of it.
Thank you for picking this one.
http://goldjewellery2.blogspot.com/

Oh Gwen - thanks ever so much!!

greatbaz - thank you - I love them, too.