Joan Crawford: A Face and a Whole Lot More in "Our Dancing Daughters"

This is my entry in the Joan Crawford: Queen of the Silver Screen Blogathon, hosted by Pale Writer and Poppity Talks Classic Films. Click HERE for more Joan.

"Joan Crawford is doubtless the best example of the flapper, the girl you see in smart night clubs, gowned to the apex of sophistication, toying iced glasses with a remote, faintly bitter expression, dancing deliciously, laughing a great deal, with wide, hurt eyes. Young things with a talent for living." F. Scott Fitzgerald 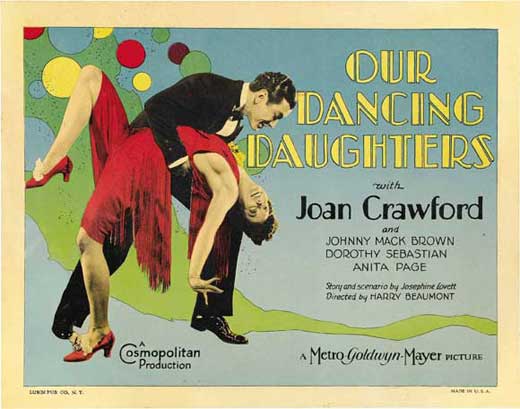 1928's "Our Dancing Daughters" is generally accepted to be the film that made Joan Crawford a star. Since 1925 Joan had been toiling away at MGM first appearing as Norma Shearer's double in "Lady of the Night," and quickly working her way into supporting roles with important stars by the end of the same year. As Norma Desmond rightly proclaimed, silent stars had "faces," memorable canvases of expression that provoked emotion in the audience. With her large, expressive eyes and classically contoured face and profile, Joan clearly had a "face." But soon, film stars would need more than a face.

"Our Dancing Daughters" is the story of 3 flapper girls friends, all part of the "smart set." They go to parties, laugh a lot and flirt with boys.


Diana Medford (Joan Crawford) is known as "Dangerous Diana," and is the leader of the pack. She is a good-time girl on the outside, appearing to be free and easy, but her frivolous persona masks a virtuous heart. Female virtue is really important in this film.

Beatrice (Dorothy Sebastian) is the fallen friend who must always, always pay for her transgression.

Ann (Anita Page) is the outwardly sweet and virtuous girl who is anything but. Schooled by a materialistic mother that money and prestige are all that matter, Ann is on the hunt for a wealthy husband. 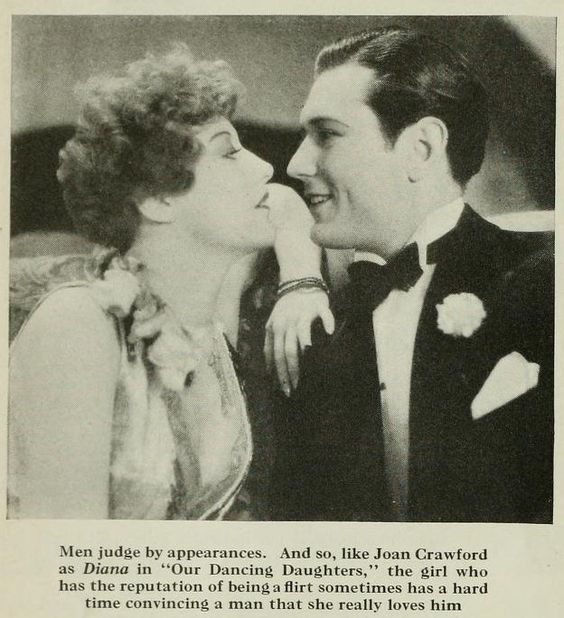 Naturally, Diana and Ann fall for the same man (Johnny Mack Brown as Ben). Although he really loves Diana, he is fooled by her outward devil-may-care attitude and Ann's sweet and seemingly innocent demeanor. He picks the girl he thinks to be most virtuous. Beatrice, meanwhile, marries Norman (Nils Asther), the man who loves her but can't seem to get past the fact that he was not "the first." By the way, Nils Asther had one of the best sneers in the movies.


Ann and Ben's marriage breaks Diana's heart and she decides to go away for a while. Meanwhile, Ann scorns her husband and is unfaithful. Ben, having enough of her lies, decides to go to Diana's farewell party. There, he and Diana reaffirm their love for one another and are confronted by a drunken Ann, who doesn't want her husband but wants the luxurious life he gives her. After a drunken outburst, she takes a fatal head first tumble down a flight of stairs and paves the way for Diana and Ben to finally get together.

Joan Crawford's star-making role revealed a fresh, youthful and compelling performer. Her face beautifully expresses every deeply felt emotion and, truly, you can't take your eyes off of her. I'm reminded of a quote by Louise Brooks who said Joan danced like a lady wrestler. She does put a lot of muscle in her dancing, but it's her acting and her presence that captivate.

A word about Anita Page


As fabulous as Joan is in "Our Dancing Daughters," the film is almost stolen by the tremendous performance by Anita Page as Ann, the girl with cracked ice in her veins who was sinfully abused by her materialistic mother. Of the 3 leading ladies, her's was the sweetest face that masked the blackest heart and she played her part brilliantly. After a great start to her film career (she also starred in "Broadway Melody"), it slowed to a halt in the 1930s.

By 1928, the film flapper had been firmly established. She was young, fun loving and carefree. After the sadness of World War I, gaiety, even forced gaiety, ruled the day.

Louise Brooks, with her famous bob and insolent look, was a perfect embodiment of the abandon, desperation and decadence of the 1920s.

Clara Bow, the most famous flapper of all and ever-famous as the "It" Girl was always fun-loving and always strong, but soft, and always had a hint of sadness about her.

Coleen Moore, one of the first film flappers, was also a fledgling flapper. She was tasting the joy of freedom, but only dipped one toe in the pool.

Constance Talmadge was, as Fitzgerald called her, "a flapper de luxe." She was fun and sophisticated and just slightly out of reach.

None of these actresses were able to carry their success of the 1920s into the 1930s.

And then there was Joan. 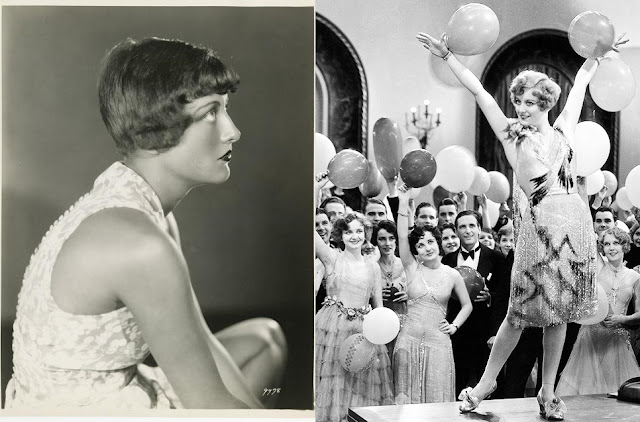 Joan Crawford was the one film flapper who was able to transition from the carefree woman to the free woman of cares. She successfully crossed the bridge between girlish flappers and full-fledged women of strength and freedom. She was oh-so-like the others, yet oh-so-different. 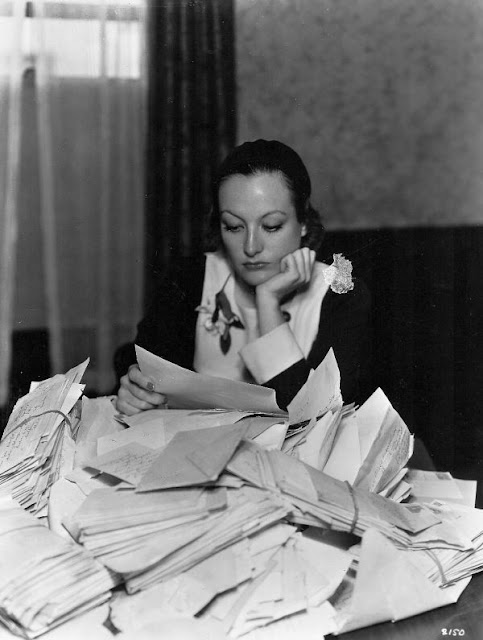 As we know, Joan got lots of fan mail and she took her fans seriously. Somehow, I suspect much of that mail came from female fans. She was the woman every modern girl wanted to be: strong, self-possessed and independent, but willing to surrender to romantic love. She was smart and competent and  yet, somehow always had to pay a price for that. Hmmm.. I have a feeling Joan would still be fighting that same battle today. Oh, and may I add that throughout her storied career spanning many different looks and styles, Miss Joan Crawford was always extremely well groomed and well dressed. She knew the importance of the full package and we, her fans, are grateful for her devotion. 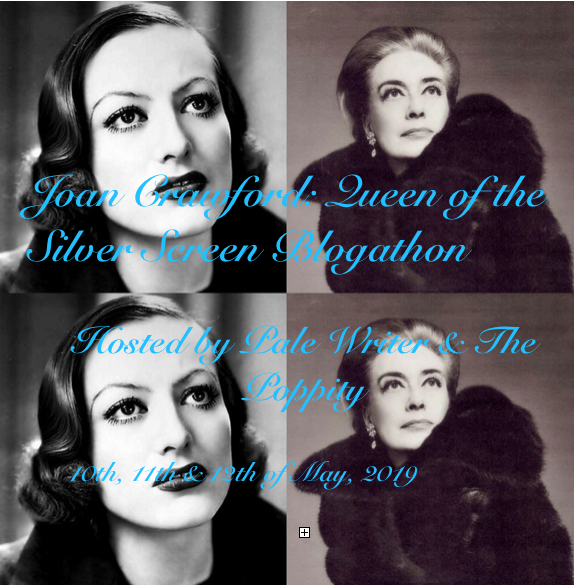 Posted by FlickChick at 8:07 PM

Magnificent work, Marsha! :-D
I first saw 'Our Modern Maidens' and really enjoyed it but not was not completely blown away until seeing 'Our Dancing Daughters'. The story is really quite compelling and brings you emotionally close to the characters. Diana is probably the most outwardly carefree role I have ever seen Joan play although inside she is a sensitive young woman whose feelings are true. It was painful to see her hurting but amazing to see Anita Page play against type as she did. This was quite a gutsy movie for the time, making it understand how it would have such an effect on Joan's career.

Thank you so much for contributing to our blogathon! :-)

Your article is fantastic! A fine look at the flapper and Joan's place in the film phenomenon that accompanied that girl.

Re: your comment on Joan's always perfect grooming for her fans. It's a bit of a drag sometimes. I always feel that even my clean pajamas are not good enough to watch the Queen.

Erica - many thanks for co-hosting the blogathon. It is unusual to see a carefree Joan, but the 1930s pretty much did away with carefree.

CW - thanks for the kind words. And yes, Joan set a high standard for outside-the-home attire. She puts us all to shame. But, may I add that you should wear clean PJs when watching Miss Crawford.

While I was reading your fab essay, I wondered why on earth I hadn't yet seen this film – especially since I claim to be a big Joan Crawford fan.

I liked how you compared her career to four of her contemporaries (Clara Bow et al) and how Joan was the only one to successfully weather everything that went on in the industry in late 1920s and early 1930s. She truly was devoted to her fans, and her work, and – like you – I am grateful.

Hi Ruth. Joan had a truly amazing career. She is the true definition of a survivor. You should give this film a look - she is so young and full of potential. it's fun to imagine her at that age.

Such a special actress and you write a beautiful article detailing such an important film in her incredible career. It's a shame that there's too much focus on the gossip and scandals (particularly with Mommie Dearest) rather than her screen work - but I guess that comes with the territory. I only saw Our Dancing Daughters a couple of months ago and loved seeing her in a different era to what we've been accustomed to - and especially a silent film! Always been a little in love with her to be honest :)

Great article and look forward to reading more of your work!

Fabulous post with your usual insightful writing and fine illustrations. After this tour de force, Joan deserved a wardrobe by Adrian and her name above the title! Thanks for another winning work.

Thank you, Paul. Glad I found your site, too.

Inge! Many thanks. There is a post about Joan and Adrian that I am on my over to read. I know he was simpatico with Garbo, but I love his Joan creations.

Oh this is fantastic. Love the flappers segment and you are so right about everything you said about Joan. Great stuff!

Thank you, Carol. I do love those flappers.

Diary of a Movie Maniac said...

Love the flappers too. I tend to forget what a great dancer Crawford was! She had great legs! :)

I want to watch this film so much! I only haven't got the time to do so!
I loved the last paragraph about Joan - so true! Also, your description of Colleen moore made me laugh.
Thanks for the kind comment!
Kisses!

This is such a lovely article! You capture the reason for Joan’s early success so well, how she embodied all of the gaiety of the 20s, but also a wonderful fragility. Thank you so much for participating in our Blogathon.