This is my contribution to the Classic Comfort Movie Blogathon, hosted by Rick at The Classic Film & TV Cafe. Click HERE and find out what movies comfort us when we need a movie hug. it's an awesome lineup! 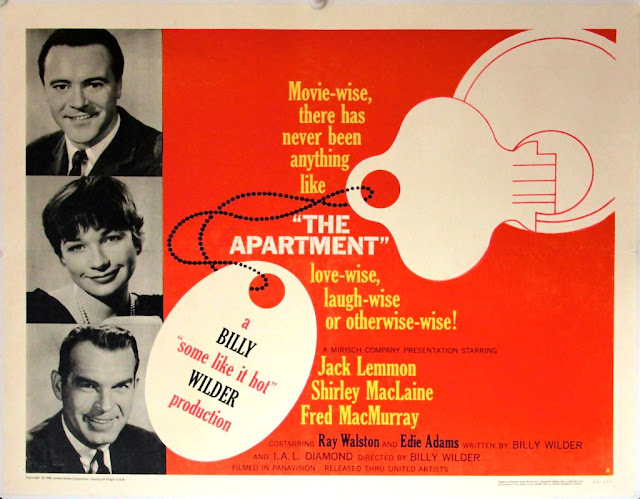 Having a bad day? Whose day could be worse than CC Baxter’s?

Shut out of his own apartment while his married insurance company superiors use it for a trysting place, there is no rest at home for him and no love in his life.Worse still, his boss, Mr. Sheldrake (rhymes with snake), dangles a huge promotion in front of him if CC gives Sheldrake exclusive rights to his apartment for his extra-marital affair.

It’s a moral dilemma, but the one shining light in his day is Fran Kubelik, the lovely elevator operator and the object of his affection. He scores a date, but she stands him up.

Maybe a worse day than CC’s is Fran’s. Trying to break away from her affair with Sheldrake, she is once again drawn into it with a promise that he will soon leave his wife. And where does he take her for this renewed affair? The apartment, of course.

Pretty much an even more horrible day for both is Christmas Eve. CC is stuck at a bar while his boss spends some time with Fran and Fran tries to kill herself after Sheldrake goes home to celebrate the holiday with his wife and kids (after slipping her some cash for a Christmas present).

Now, I’ve had bad days, but never one like these two are having. Time to settle in and let all of my empathy for them warm my heart.

Once CC and Fran learn the truth about one another, they spend some time together while Fran recuperates from her attempted suicide. CC cooks spaghetti for her, plays gin rummy with her and generally shows himself to be the better man for her. He is smitten; she is scared and ashamed.

Their time together in the apartment is like a comfy robe.

In a twist, Sheldrake’s wife is tipped off about his infidelities by a former flame. He is now free to pursue Fran. She assents, but soon realizes that this creep is not the man for her. Racing back to Baxter, "The Apartment" warms my heart because fundamentally decent people win. And sometimes, I just need to believe that is true.

Posted by FlickChick at 7:39 PM

We can relate to C.C. Baxter and Miss Kubelik. They're not bosses, not the ones with power. Life happens to them. We root for them. Oh, how we root for them! So much comfort in spaghetti and neighbors and a cold.

I love the way you relate the warm feeling we get from a story with such a sordid base.

I think I realized how much I love Jack Lemmon because of “The Apartment”. He makes cinema magic as the nicest fellow ever. We cheer for him and dearly want for him to be successful in love. I really enjoyed your post!

I am a big time admirer of Billy Wilder and The Apartment is one of his best, and one of my all time favorites. Lemmon and MacLaine are excellent. A great choice!

You made me appreciate this movie more than I did. I like it, and have seen it a number of times. I'm a tremendous fan of Fred MacMurray, and always wince that his character is such a creep. What I find comforting about this movie is less the CC and Miss Kubelik romance and more the office camaraderie with Ray Walston and company.

I didn't love this movie, but after reading your perspective on it, I may need to re-watch it.

A great choice Marsha - although it seems sad at first. With Jack Lemmon and Shirley MacLaine its a winner for a comfort movie and you give them justice in your review.Thanks for selecting this Wilder classic.

I'm with Toto! This is the movie that made me realize that I adore Jack Lemmon. It's also, hands down, my favorite Shirley MacLaine performance (and who would have thunk Fred MacMurray could be such an awesome jerk?). What a great pick!

Thanks, CW. It is such a sordid premise. Wilder is just a cynical genius with a big heart.

Thanks, Toto. I never realized how much I adored Jack Lemmon until recently when he just kind of crept up on me as one of my all time favorites. I truly miss him.

John Greco - thanks for stopping by. Next to Sunset Boulevard, it's my favorite film by Wilder.

Gary R. - I do love those office scenes (although I would not want CC's buddies to have my back!).

Brittaney - I hope you do come to like it. It kind of gives me faith that decency will prevail.

Hi Christian. Yes , it is sad. Poor Shirley - she really suffers. But She and Jack are the good guys here and they win. I like that.

Hi Rick. Well, Fred certainly book-ended his nice-guy act with Wilder (Double Indemnity and this). If only I had known about these films when I was watching him in My Three Sons. Thanks for hosting this great blogathon. You're the best!

The Apartment rose into my top 10 favorite films as soon as the final credits rolled. What an exquisite piece of work by everyone involved. And you're right, our troubles may seem mild compared to CC Baxter's. Great choice!

Fran and CC Baxter are so much like real people that we feel like we know them and want to hug them, right? And the best thing is that they make us believe that everything is going to be alright! Aren't movies like these wonderful?
Happy Classic Movie Day!

A happy thought for your ending - thank you!

I loved the way you concluded your post. Sometimes we desperately need to see decent people win, and I think that's why we still talk about this film, decades later. Wonderful tribute, Marsha.

Jocelyn - thank yo - it is exquisite, isn't it? perfect films are few and far between.

Le - Happy National Classic Movie Day to you, too! Fran and CC are hug-able - but CC most of all!

Ruth - we need to know that there are decent people more now than ever.

I haven't seen this in ages but your review makes me want to watch it again. :) Fred MacMurray is SO pathetically creepy in this.

This film is truly a masterpiece, from the script to the cinematography to the music. And who could ever forget MacLaine and Lemmon's magical performances? They take you on such an emotional journey yet Wilder and I.A.L. Diamond still manage to make you laugh. Great review!

The Apartment is one of Billy Wilder's best - and one of Jack Lemmon's, Shirley MacLaine's, Fred MacMurray's, etc. I love it and love your write-up, Marsha. "Rhymes with snake," indeed :)