Classic History Movie Project Blogathon: Early Musicals: Throw it on the wall and see what sticks

This is my entry in the Classic History Movie Project Blogathon hosted by the 3 divinities, Fritzi at Movies Silently, Ruth at Silver Screenings and Aurora at Once Upon a Screen. Please be sure to check out the great entries representing the entire history of the medium we love best. 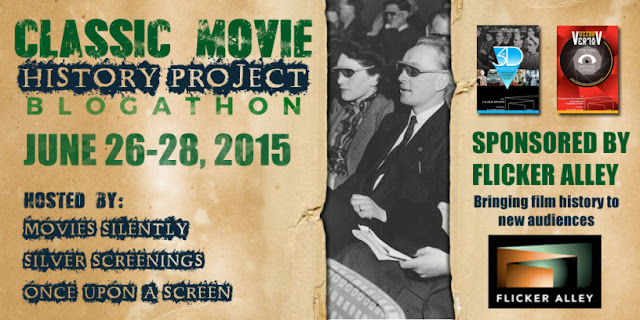 EARLY MUSICALS: EVERYTHING BUT THE KITCHEN SINK

By 1927 the silent film had evolved into a high art form. The language of film was set and the world of glamour and the stars had captured the imagination of the globe. Life was good. And then Jolson spoke...and sang.... and the universe of film changed forever.

As so grandly depicted in "Singin' in the Rain," Hollywood was thrown into a tizzy by sound. Silent stars were not only forced to speak, but in many cases were forced to sing, dance and do other musical things (think Buster Keaton and Clara Bow). But silent films were never really silent. From big orchestral accompaniments in big cities to the lone piano player in the small towns, movies always had music. Theme songs were common (for example: "Diane" was the theme song played to "Seventh Heaven"). One could argue that silent film had more in common with dance than it did with talking films.

From 1927 to 1933, Hollywood's musical trial and error was was on display for all the world to see. Sometimes the results were glorious, sometimes they were interesting and sometimes they were just plain embarrassing. But never before or since has the movie-going world been treated to so many creative achievements and so many diverse talents from all forms of entertainment. It truly was a time of throw it against the wall and see what sticks.

The Prologues: dipping a toe in the water
Warner Brothers and Vitaphone lead the way with sound. Even before "The Jazz Singer" in 1927, Warners offered a full recorded score for 1926's "Don Juan." Included with the program was a prologue of short sound performances featuring musical stars from the NY Philharmonic and Metropolitan Opera. Spoken words were heard only from Will Hays, who introduced the program.

And so, from radio, vaudeville and Broadway came the storied stars. Sound provided the world a glimpse of performers that most would never have the opportunity to see. From the heights of the Metropolitan Opera to the common clay of burlesque, prologues and musical shorts created a hunger for musical entertainment at the movies.

The Stars: oh, silent stars, why are you still here?
1928 solidified Jolson's stardom in "The Singing Fool," while a certain mouse made his whistling debut in "Steamboat Willie."
Audiences were treated to performances by the great Broadway stars Marilyn Miller in "Sally" and "Sunny," and Fanny Brice in "My Man." Other stage and radio luminaries such as Sophie Tucker, Beatrice Lillie, Gertrude Lawrence and Helen Morgan took a crack at musical features, shorts and studio extravaganzas such as "Paramount on Parade" and MGM's "Hollywood Review of 1929." None of them made a dent and headed back to the stage without a backward glance.

Many Hollywood stars did not make the sound cut musically or otherwise. However, there were some surprising survivors and even thrivers.

Ramon Novarro proved he could sing when he crooned "Pagan Love Song," Bebe Daniels and John Boles thrilled audiences in "Rio Rita" and the glorious Gloria Swanson stepped up to the plate in 1929's "The Trespasser" with a throbbing rendition of "Love, Your Magic Spell is Everywhere."

Janet Gaynor became a musical sweetie for a while, as did the adorable Nancy Carroll, who was frequently partnered with Charles "Buddy" Rogers.
The Hits and Misses: can't get enough
By far the luckiest silent sweetie to make in dent in sound musicals was Bessie Love in 1929's sensational "Broadway Melody." Though it looks pretty creaky today, "Broadway Melody" proved that feature length films could talk, sing, and dance in a cinematic fashion that did not simply photograph a stage play. Broadway star Charles King provided the male lead, starlet Anita Page provided the beauty and Bessie Love provided the depth and heart of the film. Songs written specifically for the film by Nacio Herb Brown and  (including the title song, "You Were Meant For Me," and "The Wedding of the Painted Doll") and the all talking! all singing! all dancing! musical numbers (filmed in color - now lost) left the audiences wanting more.
So successful was this film that it won the 1928-1929 Academy Award for Best Picture.

Suddenly, the movie market was flooded with musicals. The public could not get enough of backstage musicals, operettas, Broadway-to-Hollywood musicals and all star extravaganzas.

This is NOT a Musical: too much of a good thing
And just as fast as it started, it stopped. Too much cake, even if it is good cake, can cause you to get sick of it. And by 1930 the public had had too many musicals. Films that were started as musicals were suddenly changed to non-musicals in mid-production. Broadway musical star Marilyn Miller has started "Her Majesty Love" as a musical only to finish it as a non-musical. She packed her bags and dancing shoes and went back to New York. Hollywood released over 100 musical films in 1930. 14 musicals were released in 1931.

A lone musical success in 1930 was "Whoopee!" starring Eddie Cantor. Straight from the successful Ziegfeld production, Cantor was an immediate musical success. Goldwyn's production not only had the star and the Ziegfeld name, but Technicolor (that still survives) and choreography by a guy named Busby Berkeley, who would soon head over to Warner Brothers and change the way dance is seen on film.

There were some successes (1932's "Love Me Tonight," for example), but, for the most part, audiences had tired of musical films.

42nd Street, Crosby & Astaire: all set now
And then the cycle started up all over again. By 1933 Warners had discovered the winning formula of "42nd Street": stars, chorus girls, a fast pace, memorable songs, snappy dialogue and true cinematic style.

Over at RKO, Fred Astaire set the standard for intimate dance and elegant style, while at Paramount, Crosby set the style for a singer whose stardom rested on a voice and a personality.
All that followed would one way or another imitate these patterns. Never again would there be room for slightly out of step dancers, turquoise Technicolor skies, new voices and the trial and error of new technology right before our eyes.

Posted by FlickChick at 1:17 PM

Thanks for the recap of an interesting era. One of my favorites, in an "Are you kidding me?" sort of way, is the scifi musical "Just Imagine" (1930), which even includes an extravagant musical number by Martians.

That was fun! I love the talent of musical performers when it shines, and I even love it when it tries - and tries really hard.

Great look at early musicals! I've been getting more into the late-30's Big Band musicals... Just watched Sun Valley Serenade and Honolulu recently... It'll be good to follow this up and see how they began!

Hi Richard. There were so many over the top experiments, but "Just Imagine" has to be one of the most over-the-top. A failure, but a fun and interesting one.

Hi CW! Yes, some folks tried really, really hard! Only Crosby and Astaire NEVER looked as though they were trying.

Cory - oh my - you are in for a treat (if you can get past the antique technology and some amateurish performances - but that is what makes it fun!).

Terrific as always. Especially loved the Gloria Swanson clip. Colorful Eddie Cantor "Making Whoopee" is lovely. "42nd Street" is an old favorite of mine. Thanks again for a joyous post. So much fun!

Thank you, Inge - I did pick the "best." But dig those chorus girls in the Broadway Melody number - ouch!

This was wonderful! I'm actually smiling while reading this at college. It was a very well-written piece, with humorous spice. These early musicals were delightfully weird.
Thanks for the kind comment!
Kisses!
Le

Hi Le - aww...so glad I could make you smile. I just adore these films - probably because they are so delightfully weird!

Terrific, Marsha! Let 'em eat cake! It's never enough. Wonderful way to recount the happenings and oh those names! Wish they'd all made more movies. The Gloria Swanson song floored me! Thanks so much for this!

ONE HUNDRED musicals in 1930?! The mind reels. No wonder the public grew weary. You know what they say about too much of a good thing...

You've made a going point about throwing it against the wall and see what sticks. I tend to be a little impatient with early sound movies, but you've reminded me that the rulebook hadn't been written yet. They needed to try all kinds of things, because you just never know.

This is a great post. Thanks for joining the blogathon! :)

Hey, Ruth - it was fun while it lasted. I wish I had included the clips of dancers out of step and dropping props and such mid-song - great stuff!

Aurora - many thanks. Wasn't Gloria wonderful?

Great subject and review FlickChick. We do hear and see so much about the later musical, but the very early ones are often forgotten or ignored. I find them surprisingly good come upon unawares. Thanks for the highlights in your post.

Thanks, Christian. It was such a fun era - all trial and error - many triumphs and many boo-boos (which are fun, too).

Wonderful post. I love the idea that anything was possible, but it must've been so daunting for everyone involved. And wow! 100 musicals in a year? That's quite a feat. No wonder they sometimes all seem to blur into one!

Hi Girls - yes, it really must have been terrifying for those in front of and behind the camera. All mistakes were up there for the world to see.

Very informative post! Never thought about the fact that early silents weren't really silent when you consider the music accompaniment. Good point. Also - I had no idea so many musicals were made in 1930--especially interesting when compared to the amount released the following year.

That was a fun post. It is exciting to watch people try to figure out how to do new things. I love the backdrop for the "Broadway Melody" number.

Hi Classic Reel Girl - indeed, music was always a very important component of the silent film experience. Thanks for stopping by.

Thank you, JOe. I am sorry I didn't include the "Puttin' on the Ritz" number from the film of the same name. That was one freaky production.